I’ve so many ‘favourite’ gardens I really need to expand my vocab of adjectives. And so I’m assigning ‘cleverest’ to this next one: Steven
Well’s home garden, about half an hour north east of Melbourne. 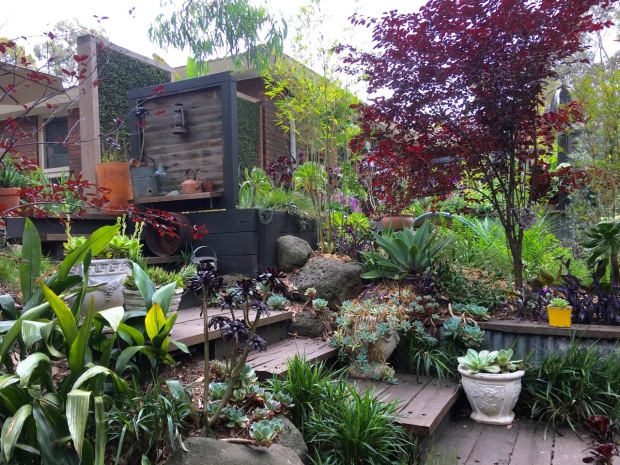 The burgundy hues look wonderful with the timber steps and screens, enlivening the various greens

I was lucky enough to visit at the end of last year, just as spring was becoming summer. Steven had shown me pictures of his garden before, but nothing had quite prepared me for what I about to experience. It absolutely had it all. 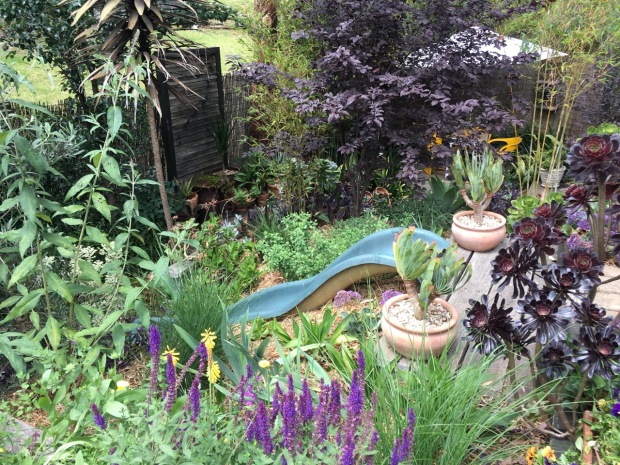 The upcycled children’s slide is a novel way of getting from one area to the next (but I’m glad to say, not the only way!)

It was one of those gardens that occasionally comes along and makes you feel about five years old. You just want to throw down your bag and run around the place, to explore each and every corner. And boy, are there a lot of corners (we’ll come to that later). 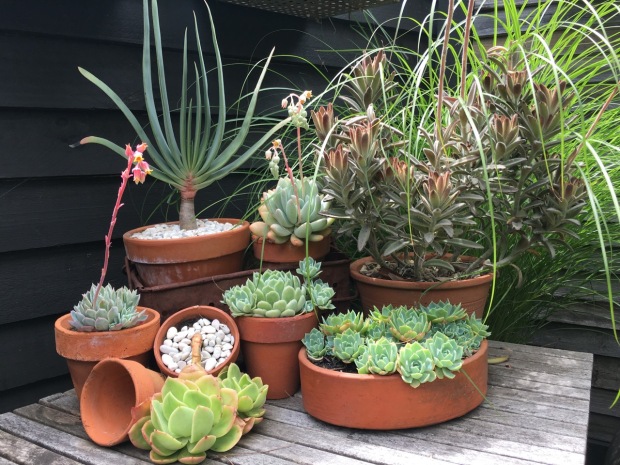 This collection of succulents (how we all love the Aloe plicatilis, top left!) is not only beautiful but positively thrives in Melbourne’s climate

This garden gets eleven out of ten for all three criteria of ‘bold, fit and character‘. But it has so much more. I’ll lay out the four aspects that wowed me most. 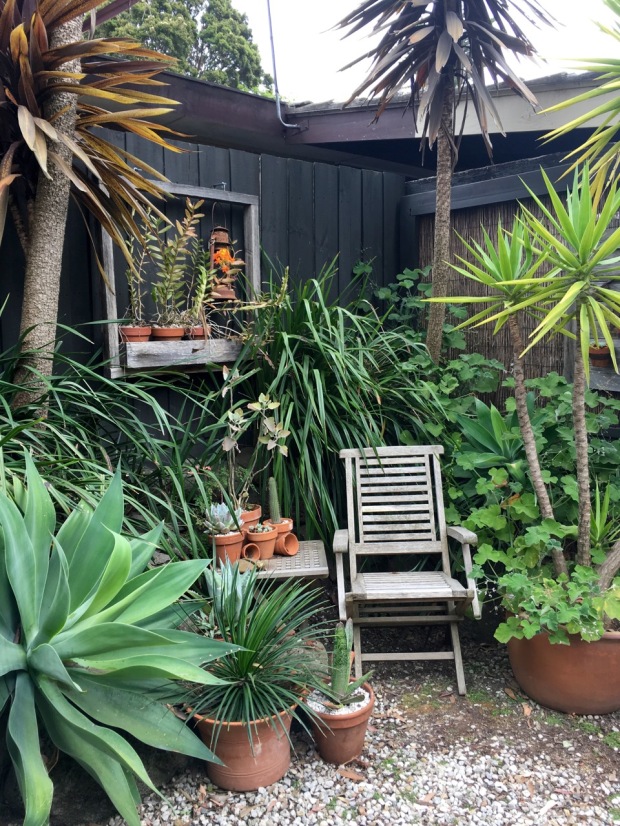 Thinking about it now, I’m pretty sure you’d never be much more than eight metres from the house, wherever you stood in this garden, with all but one side not much more than path-width. And yet with two distinct dining areas, a separate fire pit and numerous additional seating areas in thoughtful locations, this garden feels huge. 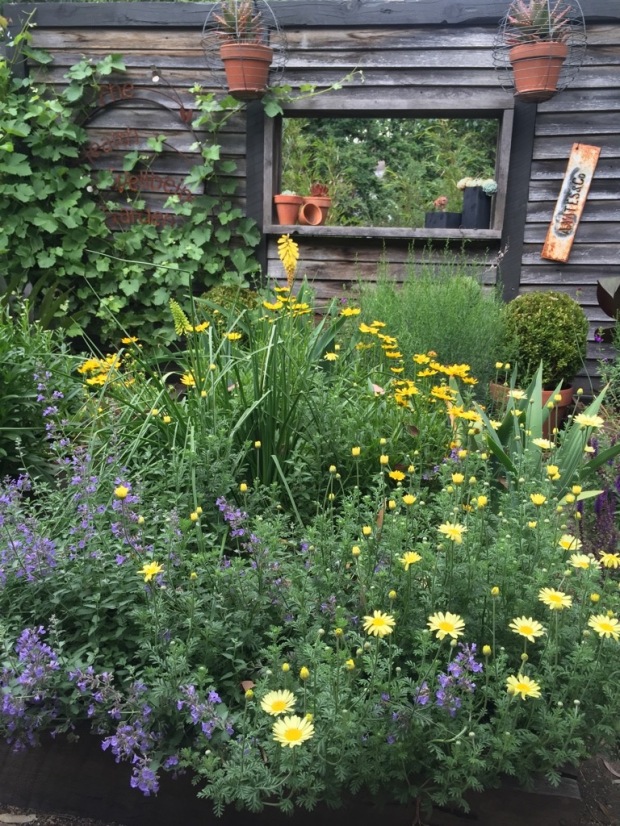 Abundant perennials give the air of a generous herbaceous border. The open ‘window’ provides views through to the fire pit area. Photo: Steven Wells

As you stroll out from the house, clever glimpses reveal hidden areas tucked away and intrigue you to explore. Along the way, you see unexpected treasures which stop you in your tracks and even the fifth time along that same track, you are still spotting things for the first time. There is such depth to this garden, such imagination, that you feel it would take weeks to see it all. And yet it can’t be more than 150 square metres. 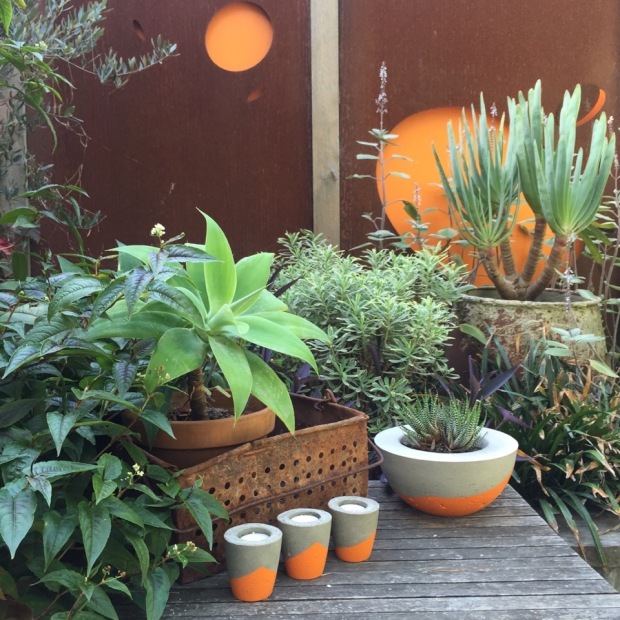 Even on a cloudy day you feel the sun is shining in this garden! Photo: Steven Wells

Steven has used a whole range of techniques to divide up the garden into smaller areas, keeping just enough sight lines to make it feel open, spacious and interesting without revealing everything at once. He has then used layering to work every single square centimetre, resulting in a fascinating, beautiful, yet uncluttered look. It really is remarkable. 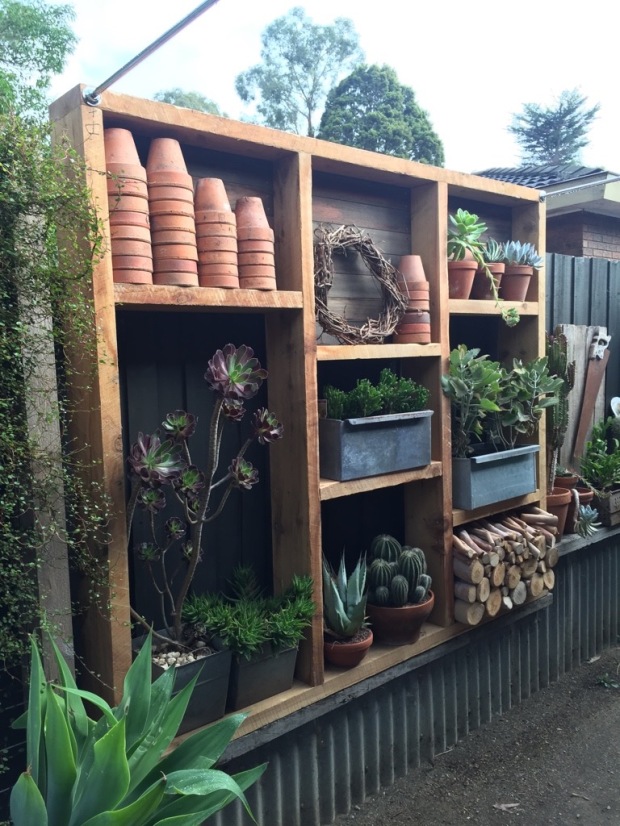 Narrow pathways are no problem for Steven. He just creates a skinny ‘bookcase’ and fills it to the brim with assorted gems. To the left is a living, double-sided screen made from Muehlenbeckia, some wire and four pieces of timber. Photo: Steven Wells

2. The challenge of slopes and angles

And if you thought the challenge of space was quite something, have a look at these angles and slopes. 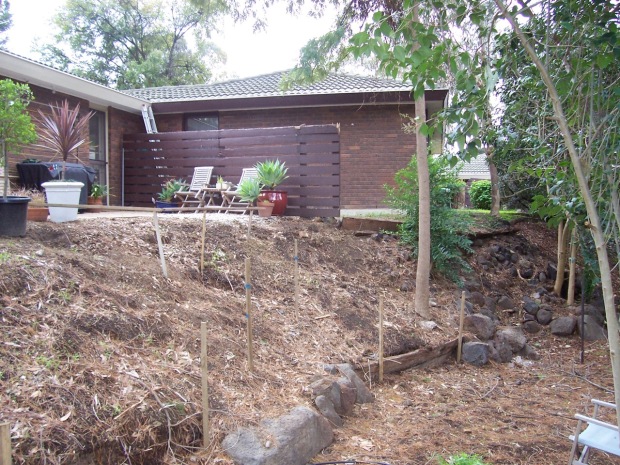 This was the garden back in 2006. Just look at it. It’s hard to imagine you could do anything with that slope. And slopes were not the only challenge. This is the site in plan view: 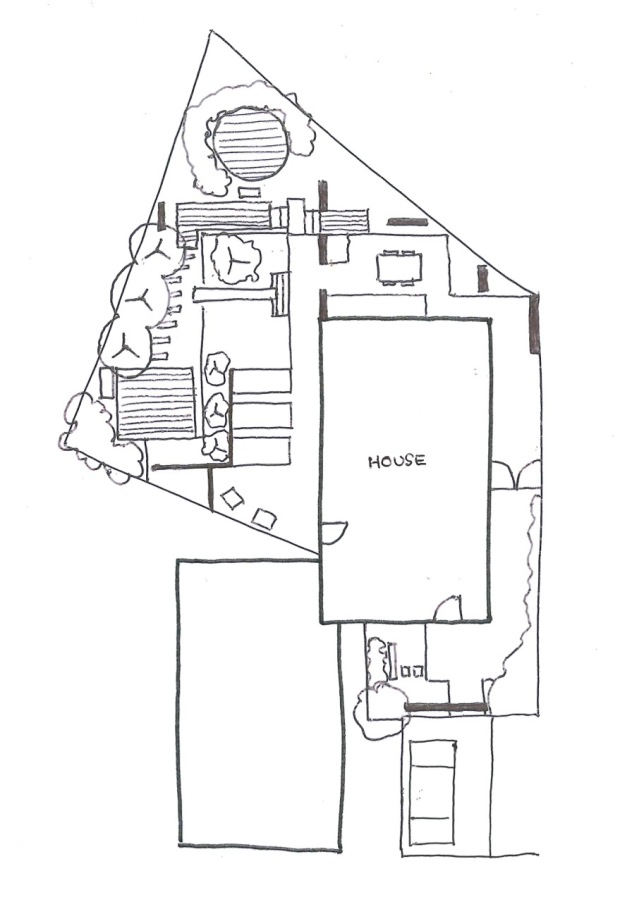 There are all sorts of acute angles and nothing much lines up with the house itself. It is nothing short of mastery that Steven has displayed in producing a garden that feels both entirely boundary-less and in total symbiosis with the house. Easily to look at it now and think the layout is obvious, but seeing the before photos gives some idea of just how much vision Steven had. 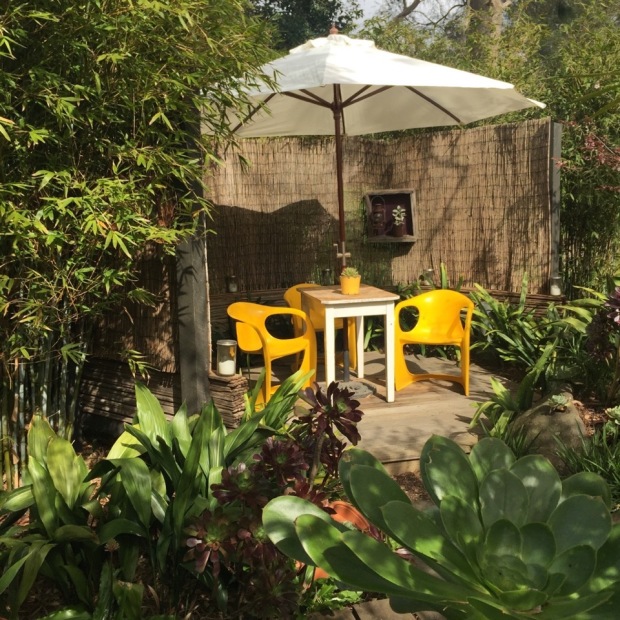 There are even pot plants on the wall of this second dining area. Photo: Steven Wells

3. Unity and cohesion of design

Today, there are thousands, if not millions, of experts in creating unity and cohesion in a design. However, for the most part, each expert takes an element or two and repeats it lots of times. A beautiful pot with a beautiful shrub, times by five and stick in a row. Job done. 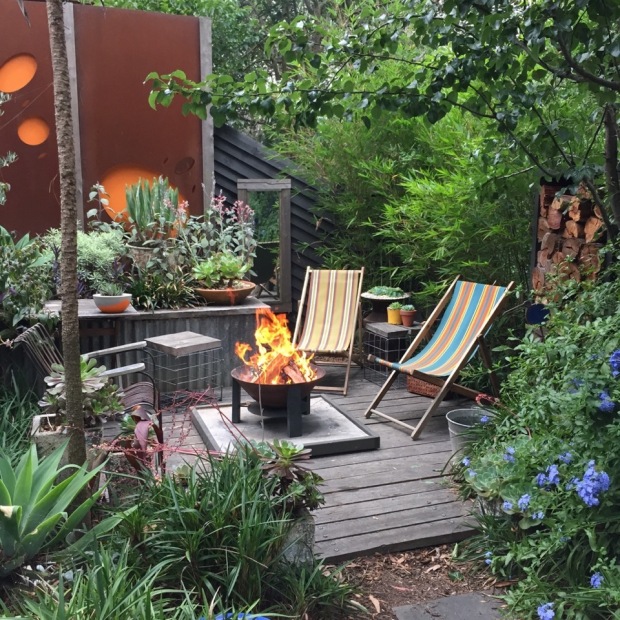 Everything seems so effortless in this garden; I love the use of so many natural materials. Photo: Steven Wells

To create unity and cohesion without instant boredom is another skill altogether and the more complex the design, the harder it is to achieve. So given the complexity – in detail, in layout, in the variety of material – that Steven has chosen, it is, quite literally, a miracle that the whole thing comes completely together.  To have unity that challenges you – the cohesion is clear but you’re not sure why or how – is the ultimate design skill. 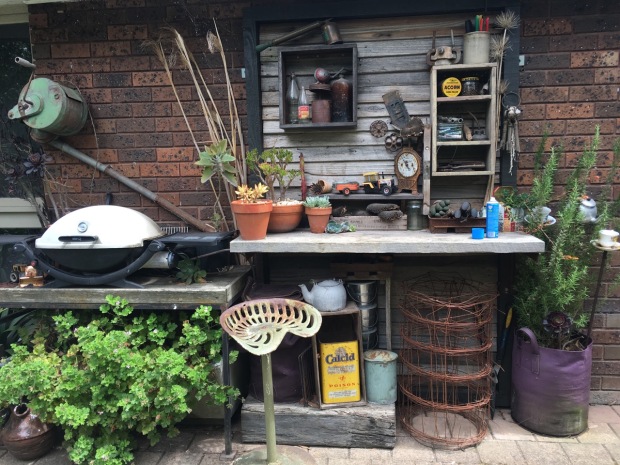 Even the barbecue/potting area is stunning, with all sorts of trinkets to discover

Steven pretty much made everything in the garden from scratch himself, upcycling the most unusual objects (cement mixers, children’s slides, you name it) and this theme of rustic objects is just one aspect that aids unity. But Steven’s eye is one in a million: the colours are amazing, the textures, the forms, just nothing looks out of place. 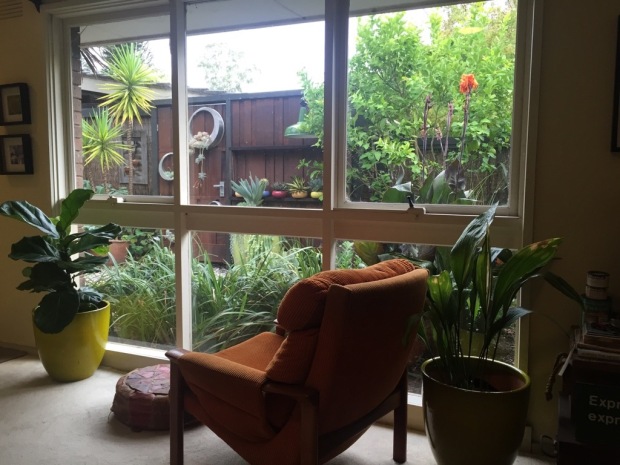 I could definitely cope with this view from my window! Photo: Steven Wells

4. Reflecting the personality of a garden’s owner

I’ve always loved the idea of someone’s personality being reflected in their house or garden, but it’s something I’ve only really understood and fully believed in for the last few years. 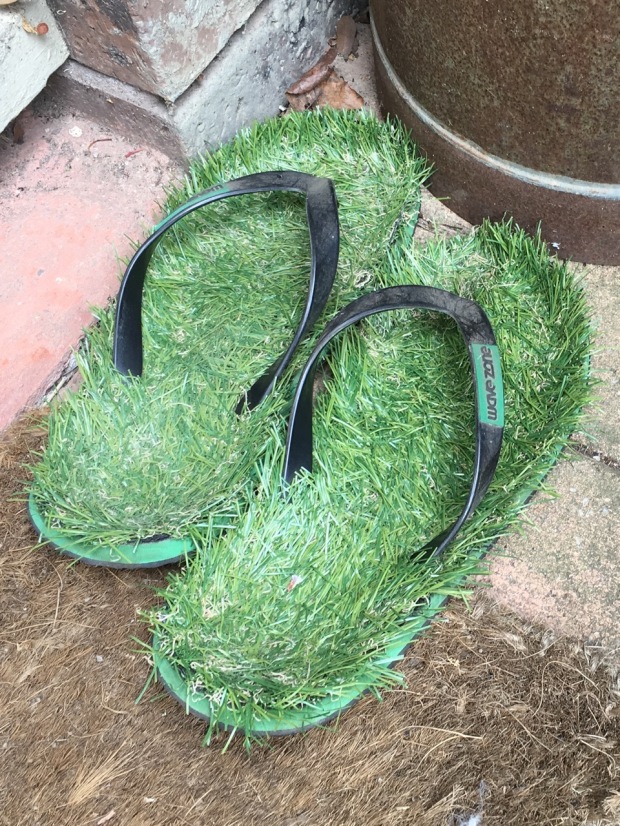 If you don’t have a lawn to walk on, have a pair of lawn thongs by the back door instead!

If I was to describe Steven to someone who hadn’t met him, I would say he was sparky, energetic, fun, modest, quirky (I caught him rolling down the bank of an open garden the first day I met him!) generous, cheery, upbeat, adaptable, bright and spirited. I’ll challenge you to not find any of those characteristics in his garden! 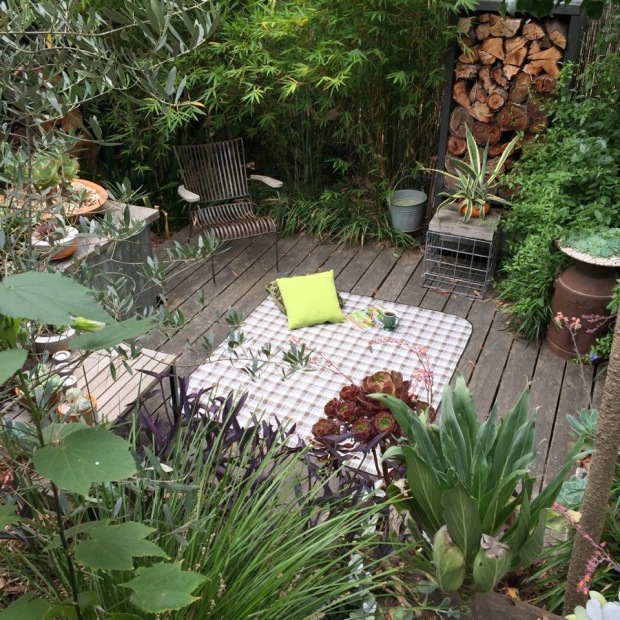 Anyone for a picnic? Photo: Steven Wells

We’ve had some good debates in the comments section of this blog around ‘soul’ in a garden. It’s something that’s really tricky to put your finger on and articulate, but that is crystal clear when you feel it. It’s also the one thing many would say is the primary success factor in a garden. And this one feels so right, not only because it is stunning to look at, but because it is Steven inside out. 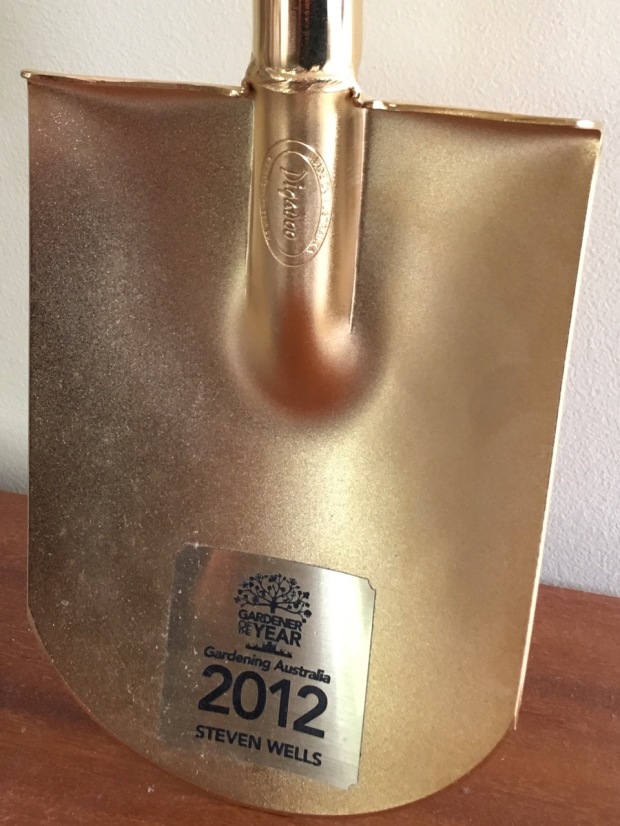 Steven Wells won the golden spade as the winner of the ABC Gardener of the Year competition in 2012, for his work in horticultural therapy

I’m feeling exceptionally lucky right now. My big news is that I have finally moved into a beautiful new home in London, with a reasonably-sized, if currently rather bare, terrace. The second stroke of luck is that Steven is coming to stay with us very soon. The third is that Steven is not only one of the cleverest gardeners I know, but also a very generous one. And so I’m very much hoping to bounce some ideas around with him, glass of wine in hand. Can’t wait to see you, Steven! 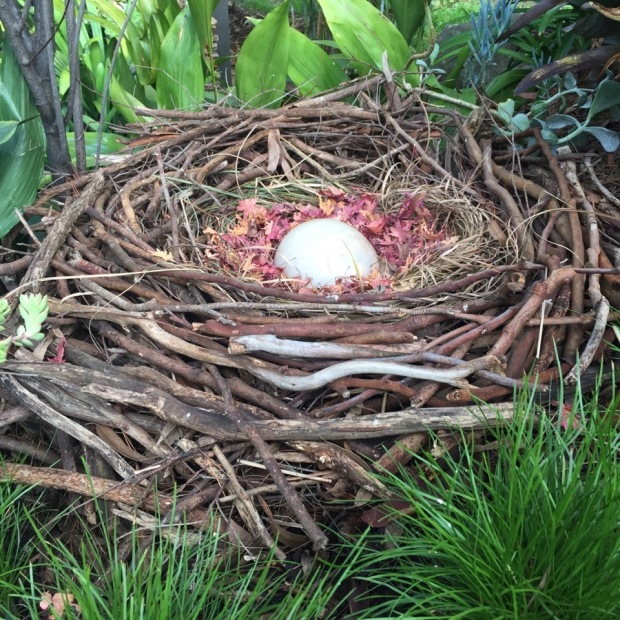 Fallen branches from a gum tree in Steven’s garden have been put to good use, along with a distinctly egg-shaped, giant pebble! Photo: Steven Wells 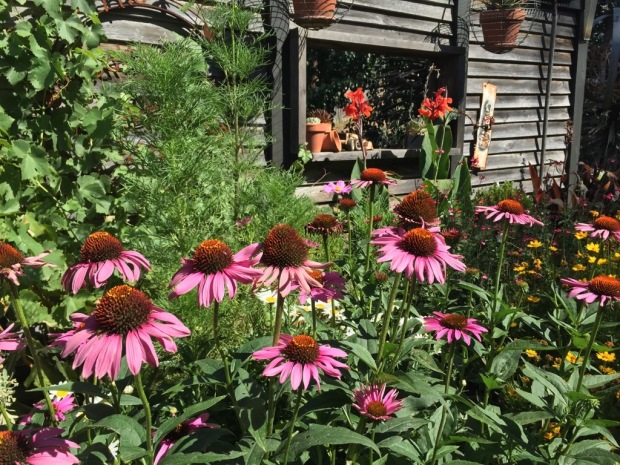 Who can resist Echinacea? So optimistic and keen, with their heads to the sky. Photo: Steven Wells