An imaginarily perfect garden, or a real life one?

You could be forgiven for thinking this was one of those ‘imaginary’ gardens. You know, the impossibly perfect ones you see on Pinterest – with no mention of location or designer – that you’re slightly dubious actually exist.

Self-sown spikes of Digitalis and Verbascum punctuate the gravel path

But this garden, designed by Michael McCoy and planted up by its wonderfully hands-on owner, really does actually exist. I saw it with my very own eyes.

Lazy, hazy, summer afternoons. Everything feels OK when you experience plantings like this. Photo: Michael McCoy

I confess that only half the photos here were taken by me. I put it down to ‘awestruckness’. Part awestruck with the beauty in front of me, which felt like nothing I had ever seen in Australia, and half mesmerised by Michael’s energy and story-telling of the garden’s development. I left feeling entirely exhausted.

The glimpses out to the fields and hills beyond anchor the garden whilst retaining a sense of intimacy within it. Photo: Michael McCoy

Somewhat annoyingly, Michael is not only a captivating story teller, a garden designer of immense skill and generous to a tee with his time, he also takes the most wonderful photos. He had stood in exactly the same spot at exactly the same time as me and yet come away with photos of an entirely different quality. It’s lucky he’s an inherently likeable chap. 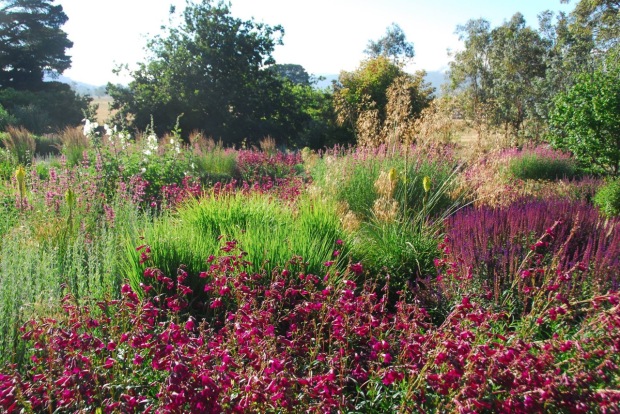 Similar colours can look terrible when closely combined, but nothing jars in this garden. Photo: Michael McCoy

But the garden. Gosh, the garden. It’s hard to know where to start with describing why it’s so good. Perhaps we’ll start with colour. Colour’s always the thing I notice first. I sometimes worry that it shouldn’t be – that somehow, as a designer, I should have moved on from colour – but it is and I think it always will be.

For me, the colours are ‘almost perfect’. Which equals ‘perfect’ in garden design land. For me ‘perfect’ is just too predictable, too staged, too unimaginative. Michael describes a few ‘aberrations’: the self sown hollyhock and the bright orange Agastache. Aberrations are a wonderful garden asset.

But the colours, such a wonderful, complementary mix. Some receding, like purples, some more prominent, like the whites, pastel pinks and of course, that orange; but the whole, so much greater than the sum of the parts. The colours also have the very necessary relationship with the landscape. The straw coloured grasses that link to the typically dry fields beyond and the dark, slightly grey green foliage that ties in with the surrounding gum trees. Michael has managed to create a very lush feel with a whole mix of greens, whilst keeping the look authentic to its location and in total harmony.

Wispy Stipa gigantea, with its oaty seed heads, adds a further connection to the agricultural fields beyond. Photo: Michael McCoy

A priority for Michael was to achieve the right balance of height across the garden. Too much variation, and the planting won’t hang together; not enough and it becomes two dimensional and static. The Stipa gigantea are one of the most important plants here, adding translucent height and movement, without blocking vistas or appearing too solid. But the whole mix of plant forms is just magical. It’s always so tempting to put something in that’s really a little too tall or a little too short, but perfect in every other way, but real discipline has been executed here. Perennials availability in Australia is limited and highly changeable and often requires last minute substitutions, but Michael has delivered a garden here that feels entirely optimised.

Euphorbia and Penstemon ‘Blackbird’ provide rhythm to this garden

An initial thought I had was that the limited range of forms and textures – mostly soft, wispy, vertical accents – helped to bring the planting together so successfully. But then I noticed a random spiky Yucca thrown in and realised that the repeated Euphorbia is hardly wispy and delicate. Contrasting forms make a garden but here the contrasts are subtle; they do their job without jumping out at you and shouting the contrast. Buxus balls so effectively provide this contrast, set within a sea of soft perennials, but they have been so entirely done to death as to now appear formulaic.

Many other delights for me in this garden revolve around the sense of free-will that this garden emits. It is clearly a garden, not a piece of wilderness, and yet it feels highly connected to nature. Self-sown spikes of Digitalis and Verbascum erupt from the gravel in unexpected places adding that element of spontaneity and imperfect perfection.

Whilst it has few (any?) native species, the palette of chosen plants comes from similar natural environments to the one we see here. The plants love full sun and free draining soil and cope with drought well. You can count up a number of continents in their origins and yet they appear as perfectly natural garden companions. It’s a great demonstration of the fact that native microclimate is what is important to cohesion, not geographical location.

The garden as it slows down for winter. Photo: Michael McCoy

And the connection to nature is further enhanced by the garden’s evolution through the seasons. When I saw it, it had that wonderful spring rush of fresh, green growth as it moved into the fullness and abundance of summer. Later it will emit the ‘I’ve-given-everything-I-can’ fally-overness of autumn and then pass through the quiet, restful, recovery time of winter. Isn’t this seasonal evolution – only observed in the non-imaginary type of garden – one of the true delights for us cool climate gardeners? 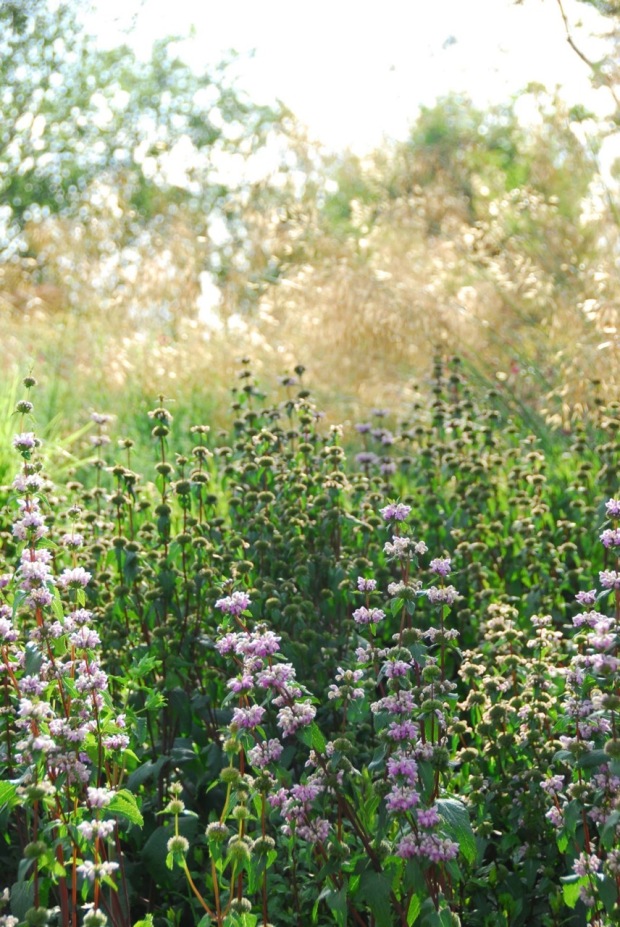 I’m wondering if Michael will let me print this, a metre or so tall, for one of my new, rather large, empty walls. It’s a view I’d happily look at over and over and over again. Photo: Michael McCoy