I’m certainly no expert on Norfolk, but having spent four days there over the Easter weekend, it’s amazing how much I’ve taken away. Just a few short days, yet I now feel a real connection to the place.

I think, in part, this is due to the ‘untouched’ nature of the region. Clearly, the agricultural fields did not appear by themselves, but everything feels a bit more established, a bit less build-up, a bit less changed in the usual piecemeal fashion.

In other words, it has a sense of place. After a couple of days, I was noticing patterns of features typical to the locality. Features that pop up over and over again. Features that make you think of Norfolk. Features that add character and interest and connect you to a region.

Can barbed wire be beautiful? When it looks so in place along an English public footpath…I think so!

Vegetation was an important part of this sense of place, but strong character permeated broadly across the landscape. I’ve pinpointed five features that for me, made North Norfolk, North Norfolk.

A walk along the Norfolk Broads at Coltishall

Norfolk is known for its beautiful coastline of sandy beaches and the waterways of the Broads. But everywhere you go, there seems to be water, despite the east of England having a much drier climate than the west. Little streams, lakes and marshland, you didn’t need to go far before water appeared. And with the sunnier climate on this side of England, the water was frequently lit up, reflections mirroring the surrounds and bringing the place to life. 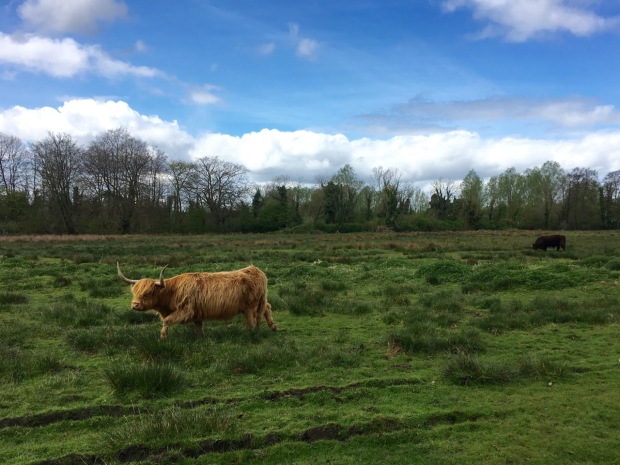 Being brave with the cows along a public footpath near Coltishall

Water wasn’t the only thing to bring life to the countryside. Everywhere you looked there were animals. Pheasants were one of our favourites, their deep red heads, spotted plumage and elegant tails appearing in unbelievable numbers. But we also saw many cows, and tiny calves, we saw deer as we walked and rabbits’ tails bobbing under hedgerows and we stayed in Barn Owl Cottage, where we were assured – unfortunately incorrectly – we’d see its namesake.

A Norfolk church in a field of oilseed rape

I’m pretty sure I’ve never seen so many churches in one area. All of a similar style and era, these gorgeous stone structures throw their towers high above the trees, almost one in every village we passed. They were built on the back of the wool trade, when Norwich was the second English city to London. We visited many large estates, also funded during this period, some of which are still family-owned farms today and others which were gifted to the National Trust when inheritance tax became prohibitive. But many of the old, red brick cottages built in more prosperous times still house the community today, the limestone leaching adding depth and patina to their character. There is a certain style to the built environment across North Norfolk, linking back to its time of economic boom, yet happily it is a rich history, rather than sorry decline, that remains and can be felt today.

I’m not sure if blue is a ‘thing’ in Norfolk or not, but I noticed a similar shade cropping up many times. Googling ‘Norfolk blue’ produced a restaurant on Norfolk Island: clearly my computer hasn’t quite caught up with my move across the world as yet. But there is something grounding about seeing a distinctive colour repeated, something that suggests there is a community who actually talk to each other and perhaps local craftsmen bringing commonality to bear.

“STOP!”: the hedgerows were extraordinarily beautiful – here a pheasant scurries away from the road

And finally, my favourite. We might have only been travelling ten miles but it would take us hours to get there. Traversing the narrow, single country lanes lined with hedgerows on both sides, we’d be stopping every few metres to examine flora or fauna which was too eye-catching to pass by. A little cluster of unusual flowers here, a species of bird we hadn’t yet seen, a luminous field of oilseed rape stretching to the horizon with only a church piercing its flowers.

Wildflowers along the coastal path at Happisburgh

This gave the word ‘wallflower’ a whole new meaning!

A beautiful bridge across the Broads at Coltishall

Had we arrived in late summer, or autumn or winter, we would not have seen the ridge and furrow, the yellow oilseed rape or the fresh, limey alexanders. Norfolk’s character, as I’d seen it, was wrapped up in this particular season; in another, the character would be quite different. 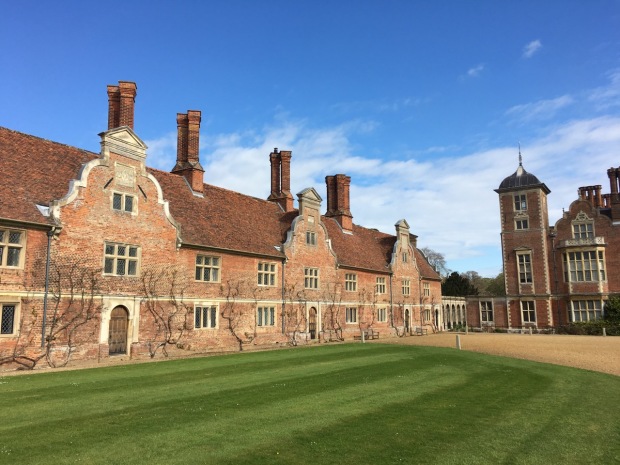 And a tour of Blickling Hall, built in the Jacobean era (1616), but added to and changed every century since, provided some continuity, some realism, a connection between then and now. A 400-year evolving history was undoubtably vital to the sense of place Blickling evoked; the element of time – and change over time – clearly visible, added so much to the experience. 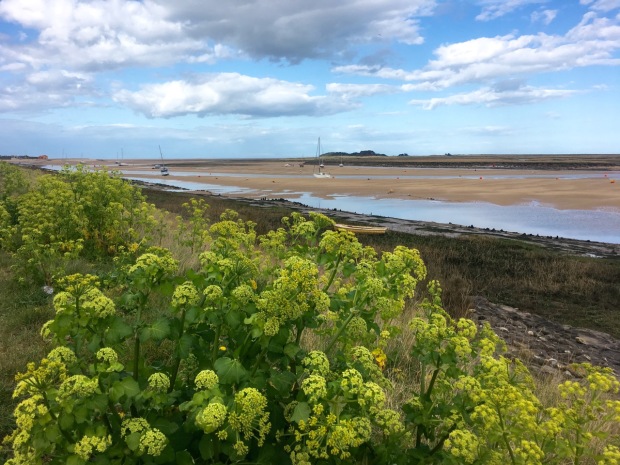 Itteringham Community Shop, a good one minute walk from our National Trust cottage, pretty much summed up all that I loved about North Norfolk. Despite incorporating a cafe in one corner, it was the smallest village shop I had ever seen, yet seemed to sell everything you could think of and serve the most delicious food. A bunch of wildflowers sat in the centre of both tables; a more tasteful April posey could not be had. And a letter on the noticeboard thanked the community for the funds they had raised to support local refugees that had recently arrived, buying simple items like clothes airers to make their new lives more manageable.

Somebody has bothered to plant all these colourful flowers in the tinniest strip of land between their house and the road…so much pride and effort seems to be made in these naturally beautiful surroundings, as if one strengthens the other

In most parts of London, no-one would notice if a refugee family moved in next door and would, in any case, be far too busy to stop and ask if there was anything they needed. I was so moved by the community spirit in Itteringham and the welcome we received as strangers to the village; it’s such a very much nicer way of life. The shop is actually the fourth oldest shop in England, dating back to 1637; clearly centuries of owners and volunteers have put their heart and soul into making this heart of the village a success. It has a sense of both time and place, just as North Norfolk has on a broader scale.

With no water in sight, you are still drawn to the coast by this magical framing of Happisburgh lighthouse from East Ruston Old Vicarage Garden – absolutely spectacular (much, much more to come on this garden!)

Somewhat surprisingly, this trip reminded me of our visit to New York. In many ways the two places couldn’t be more different, but both had that strong sense of place that means you connect with it at a deep level. I think it’s mostly about having a strong identity: once you can put your finger on what makes Norfolk, Norfolk, or New York, New York, you can engage with it, relate to it and connect with it far more. It is identity which makes a place special, draws us to it and creates a place in our hearts. It’s tricky to feel that about a nondescript, vanilla, motorway service station; we need identity to provide something tangible and distinctive to connect with.

Happisburgh beach (a local delighted in enlightening me as to the correct pronunciation: more like ‘Hayesbrough’)

So now, having practised on Norfolk, I’m very much hoping we will soon be able to find the unique sense of time and place that Oxfordshire has and build on its very own identity, as we create our new home there. I’m certainly looking forward to looking for it!

A view out from the eighteenth century Holkham Hall, a current home and working farm covering thousands of hectares

16 thoughts on “A sense of Norfolk”