As we were warmly greeted, on a slightly wet and chilly October day (and I was offered free entry as a garden designer – woohoo!), the lady at Chanticleer’s reception kindly proceeded to describe to us the key features of the garden.

She pointed us around a map of the 35 acres, making special mention of the plantless boxes in the first courtyard. I smiled encouragingly, showing her that, as a garden designer, I quite understood that at certain times of the year we need to change our pot plants over and it was quite OK that we’d just happened to pick the changeover time. As she went on to the next garden ‘room’, she mentioned that we should look out for the plantless boxes there, too. Clearly these planters were pretty special, plants or no plants. She told me that as a garden designer, she was sure I’d particularly appreciate them. 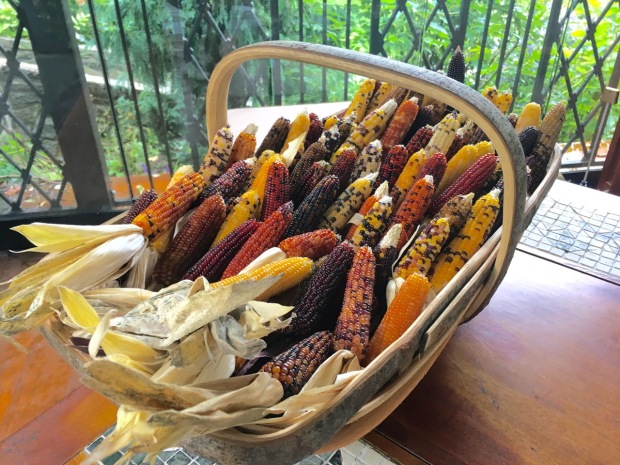 Popcorn grown at Chanticleer is displayed at the reception desk, enticing you to go and explore what else you might find

We set off on our way and, in my usual way, I was soon lost in the garden, all-consumed by all things green. I’d forgotten all about the plantless boxes, until my friend, Chris, piped up with, “hey, look, there’s a list of plants in this box”. A plant list box. One in each and every garden room! 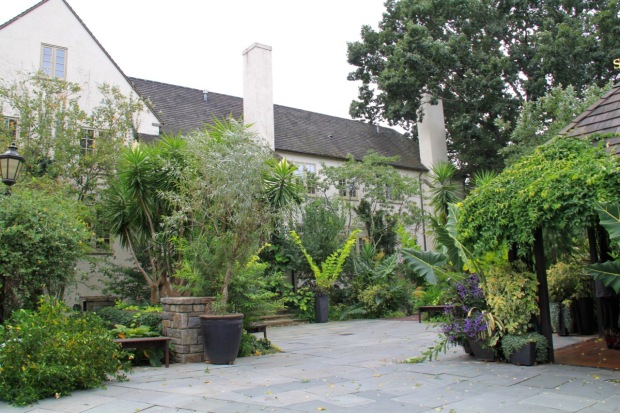 There are so many surprising plants at Chanticleer; I had to keep reminding myself I wasn’t in the subtropics!

I was clearly destined to visit Chanticleer. Michael McCoy had told me, a year or so ago, that it was almost a life-changing garden for him. Then, earlier this year, I was kindly given ‘The Art of Gardening’, by Bill Thomas, Chanticleer’s Head Gardener, as a thank you for a speech I gave in Sydney.  So, when our gorgeous friends, Caroline and Chris, said they would be travelling in the vicinity of Chanticleer whilst Paul and I were just down the road in New York…it was clearly meant to be. 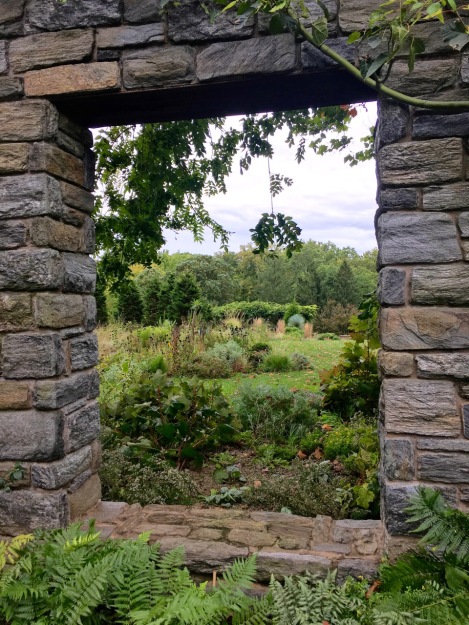 A view through a window in the Ruin Garden at Chanticleer

Chanticleer has been described as a ‘gardener’s garden’. A garden run by gardeners, designed by gardeners and existing for gardeners. It’s also been called “the most romantic, imaginative and exciting public garden in America”. And it’s not hard to see why.

I love the detail of this circular paving, looking down to the Tennis Court Garden at Chanticleer

It all started back in 1912, when the Rosengarten family purchased the block, full of towering American chestnut trees, and built their new home. Later, two new houses were built on the property for the Rosengarten children, one of whom, the late Adolph Rosengarten, followed his mother’s love of gardening and set the garden up for its future. 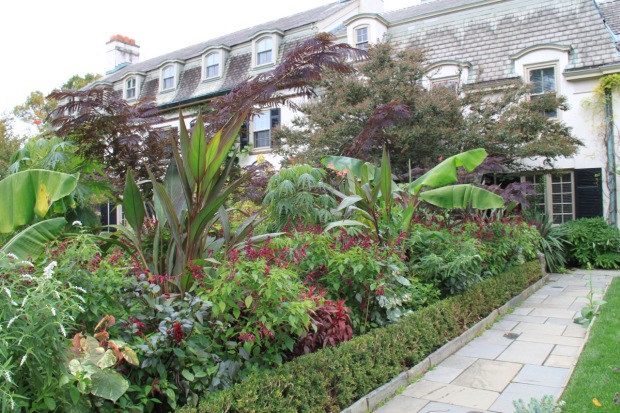 Today, nobody lives at Chanticleer. It is run by the Chanticleer Foundation, set up by Adolph in 1976, under a charter which promotes the education of amateur and professional gardeners within a beautiful, public garden. It is clear that the ethos of Adolph lives on today; even its innovation and fast rate of change reflect Adolph’s view that a good garden is never static. There are some beautiful quotes from Adolph in the book, for example:

“to create a garden is to search for a better world”

So full of hope, optimism, pro-activity and energy and the belief that you really can make a difference if you just take responsibility and get out there and do it.

The team at Chanticleer encourages you to walk anywhere you like; little pathways through naturalistic plantings were a real delight

Bill Thomas has been Chanticleer’s Head Gardener for the past 13 years and is every bit as inspiring as Adolph. He describes the difficulty some have with understanding the purpose of the garden. It’s not a home, it doesn’t get rented out, there are no weddings…it’s simply “a garden; a place of beauty, pleasure, escape”. He goes on to say that ultimately the aim is for guests “to leave in a better mood than when they arrived”. You can’t argue with that. 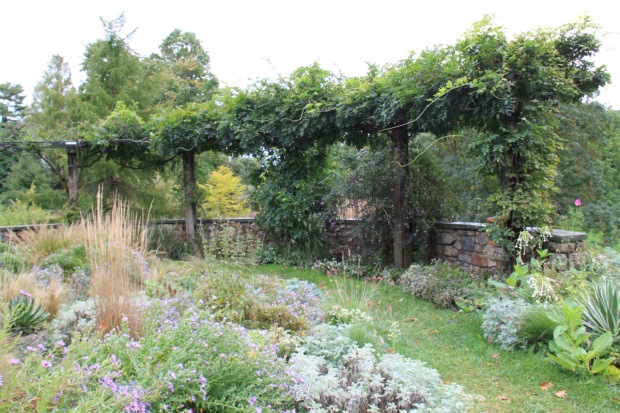 A pergola frames wonderful views of the garden below

It’s clear that Bill has also been just as fundamental to the garden’s success as Adolph. He leads a team of highly talented and motivated horticulturists–many of whom have been with him since the start–giving them just the right level of autonomy, encouragement and guidance. It’s funny to say that when I haven’t actually met the man, but it’s so blindingly obvious, both through visiting the garden and reading the book. He talks of how he started planting vegetables when his parents thought he needed something constructive to do with his time and after discovering vegetables were actually tasty and devouring both (!) horticultural books in his local library, he now finds himself in a job which is the culmination of his dreams.

I don’t know how many leadership courses I have been on in my life, but I’ve got a lot to learn from Bill. His enthusiasm is clearly contagious and he instills a culture of innovation, allowing ‘mistakes’ along the way to finding the breakthrough successes. You can feel the pride in the garden, even on a wet Sunday morning with not a single gardener in sight. I’m already scheming about how I can use some of these leadership techniques with my dear husband in our future garden, to get him excited about taking part. And in particular, to say  ‘let’s think about that’, as Bill does to his team’s less compelling ideas, rather than my usual response of, ‘no Paul, that would look awful’. I’ve so very much to learn! 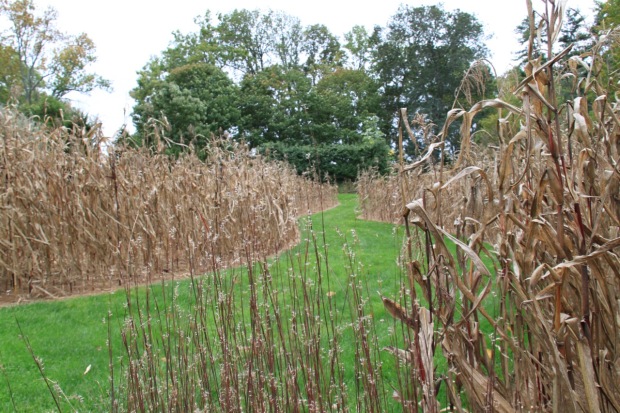 The Serpentine Garden hosts a different crop each year, celebrating the aesthetics of agriculture

Bill actually describes the garden as a research laboratory, where new plants, designs and techniques are trialled, all within the public eye. He isn’t worried that people see both successes and failures, although mentioned that they do try to rush the ‘losers’ to the compost pile.

Adirondack chairs provide a sense of America. Others in the garden were painted with giraffe patterns, showing the garden’s playful sense of fun

This ‘rule breaking’ culture is a huge part of Chanticleer’s identity. I would describe it as a playful garden; one that is incredibly quirky and personal for a public space. James Golden, who has a well known garden not far from Chanticleer, says it:

“easily matches my experience of the best of the UK gardens, though it’s different, very American in a way I haven’t been able to define”. 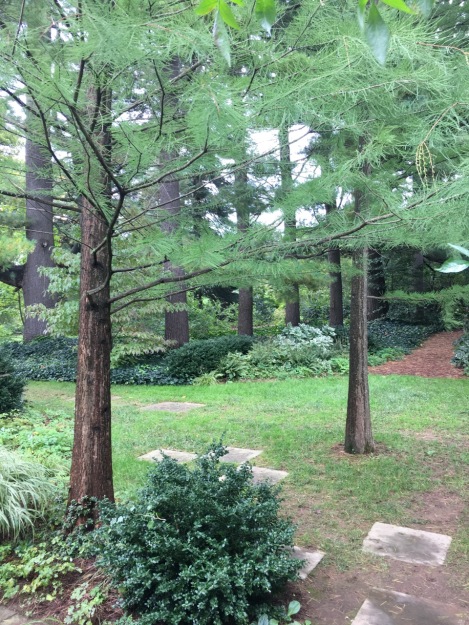 I don’t profess to know what all the trees are, but they don’t half give this garden an American feel

Fascinated as I am by the differences in culture and gardens between the UK and Australia, I thought I’d research how America fits into this, too. It’s a very dangerous topic, full of generalisations and the potential to unwittingly offend, but the way we learn to make sense of the world is through generalisations and I’m a lifelong ‘learner’, so I’ll take the risk. We just need to recognise that a generalisation is just that: there are always many exceptions.

The Gravel Garden boasts structural planting throughout the year

I’ve just finished reading an excellent book, ‘The Authentic Garden’ by a very talented American lady called Claire Sawyers and I also learnt much from blogger, Jason Kay, and his commenters, on his article, ‘Is there such a thing as an “American” garden?‘. One (American) lady comments that the ethnic diversity of America contributes to a vast range of styles and another suggested that as time goes on, more trends can be traced as a unique American garden tradition starts to develop.

The Cut Flower Garden looks so alive, even this late in the season, you half expect the plants to walk off

I think Marian St Clair, who tours gardens all over the world, perhaps pinpoints the key characteristic that makes Chanticleer so American. She says:

Indeed, coming back to Chanticleer, Bill Thomas says he hopes the garden inspires people to garden ‘more freely’. Liberty is a fundamental concept in the United States Constitution and the US has a long history of outstanding innovation. I think it is this characteristic of free-thinking, innovation and not being afraid to try something new, which makes Chanticleer so special. It looks to surprise, create high impact, be novel and almost theatrical, whereas perhaps typical English gardens are more restrained, more subtle. I remember seeing an Australian garden at the Melbourne International Flower and Garden Show, with predominantly native plants but then one bright, large-leafed Hydrangea thrown in and I laughed when I read that Chanticleer aimed to have plants with a relaxed feeling but “just to show we aren’t too serious…we throw in some artificial-looking plants like hydrangeas”.

A visit to the Liberty Bell in Philadelphia, half an hour from Chanticleer, reminded me of being a Brit in Kuala Lumpur on Merdeka Day, when Malaysians celebrate their independence from the UK!

There is also perhaps a little more practicality in American gardens–as I feel there is in Australia–of selecting a material based on its fit for purpose, rather than one that is perhaps steeped in history but not technically so good, as we might over here. The recycled tyre walkways at Chanticleer reminded me of Colorbond fences in Australia. Maybe where the pioneers to the new world value innovation, the English value tradition. Not that we don’t ever innovate, but it’s perhaps more the talented few that do and the rest safely follow lead.

It’s all a bit deep for gardens, really, but I do find it fascinating to see the differences and similarities. I think I’m probably quite English at heart but the interesting twist is that I always, always–without fail–prefer gardens with a sense of place. Gardens in America are much better when they look American, just as gardens in Australia are much better, to me at least, when they feel Australian. But I think there are some underlying principles–that I’m starting to pin down through my dissertation–which can carry across and be used anywhere in the world. Principles that can be applied to local natural and cultural history to produce something quite distinctive and special.

You wouldn’t call Chanticleer a low maintenance garden; there are huge numbers of frost-tender plants which get packed up before the winter snow arrives

Whilst I continue to work on that, I’ll leave you with the lovely words of Bill Thomas, which I think probably trump any other advice we could possibly be given on garden design.

“In your own garden, trust your instincts. Design to please yourself and make the garden your personal expression. You cannot serve two masters, nor can your garden. It needs vision and a strong leader to be good.”

Caroline and me in the Teacup Garden at Chanticleer. Thanks for such a lovely day! Photo: Chris Stockton

23 thoughts on “Chanticleer: “A Gardener’s Garden””