To console myself for no longer being able to pop out to the High Line for my thrice weekly walk, I thought I’d produce a virtual version, from the Meatpacking District in the South to the Rail Yards of the North, highlighting the various planting styles along the way.

Amazing intricacy of interwoven grasses and perennials on the High Line

I borrowed On the High Line, by Annik La Farge, from the RHS library to help me piece it all together and was somewhat surprised to learn that pages 68-69 of 226 covered ‘The Plants of the High Line’. What on earth were the other 224 pages about? My efforts to console myself somewhat backfired upon learning that I had apparently missed 99% of what was on offer. I had enjoyed the architecture along its length, but it was clear I needed to return asap to fully embrace all that Annik had so beautifully captured. 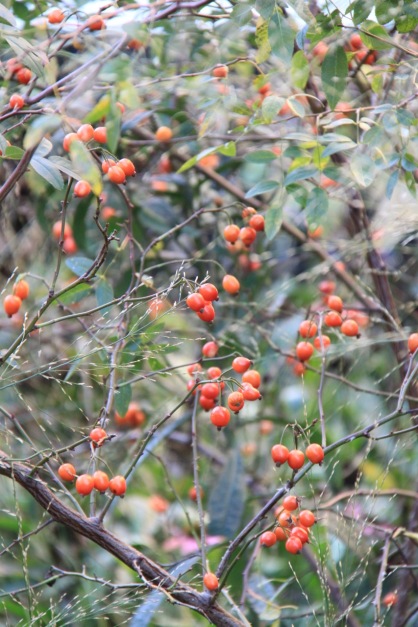 Fortunately, the hours I spent on the High Line had substantially sunk in so it wasn’t too tricky to remember each section, in least in terms of the plants. I hope you enjoy the walk too… 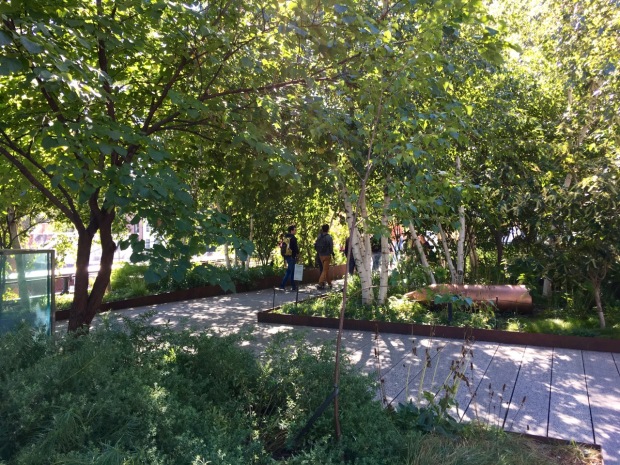 As you ascend the 45 steps on to the High Line, the steel beams of the railroad surround you until you pop out into the centre of a beautiful, green woodland. Groves of grey birch (Betula populifolia) host a canopy of branches, throwing astonishingly beautiful patterns of light on to the ground. You are immediately transported into a whole new world, your brain no longer processing the sound of the incessant car horns below. The layers of planting reflect those of nature: dense, low ground covers nestling in the shade with chinks of light coming through beneath the birch leaves.

The Line then opens out into an area of grassland; again the light is just stunning. Early one morning I ran into a professional photographer for the Line, who told me he felt this was the nicest time of day of the nicest time of the year for capturing its beautiful. On the one hand, I was thrilled that I hadn’t missed a summertime peak, but on the other, I felt the justification to myself for less than perfect photography had just evaporated in front of me!

Past the Diller-Von Furstenberg Sundeck, the next jaw-dropping viewpoint is out over the Northern Spur Preserve. Originally connecting the railway to the Merchants Refrigerating Company, it is now home to a vast number of plants (I did read 75,000), including asters, sedges, catmint, and Phlox. More than any other section along this first phase of the High Line, this area was designed to evoke the wild landscape that took over the High Line when the trains ceased. It is the most stunning tapestry of colours, soft and muted, and looking down on it from above quite takes your breath away. 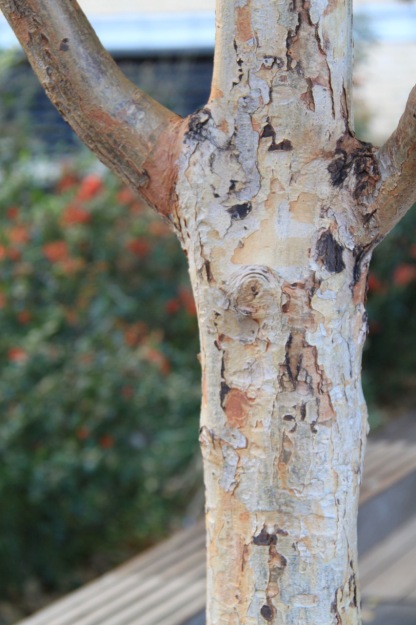 Tenth Avenue Square: The brassy-coloured bark of Acer triflorum picks up the orange fruit of Pyracantha ‘Mohave’ in the background

And if you got your breath back before arriving at the next stop, it will likely be taken away from you once more. Ten Acer triflorum maples frame a view of the Statue of Liberty, each with the most exquisitely textured, peeling bark. Whilst this is a native to northern China and Korea, not the US, it’s easy to see why it is one of Piet Oudolf’s favourite plants. 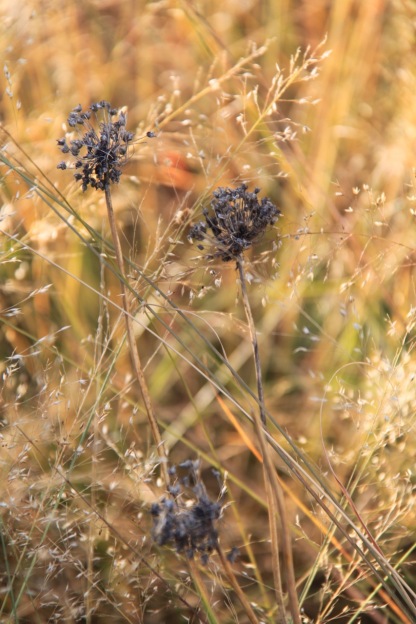 The Line opens out again as it mutates into the Chelsea Grasslands. Five grasses (Andropogon gerardii, Sorghastrum nutans, Panicum virgatum, Schizachyrium scoparium and Sporobolus heterolepis) are interwoven with various perennials and bulbs to form what I think is probably my favourite section of the Line. The crowds have thinned out by now and the backlit grasses with pops of mauve from Symphyotrichum ‘Raydon’s Favourite’ (since when did I like mauve asters, I ask you?) are a very special sight. The density of planting is incredible and the more you look, the more you see, yet holistically the impression is of naturalistic simplicity. (For more photos, click here.)

Chelsea Thicket: A change of pace with thick, green foliage, such of that of Clethra barbinervis, wrapping around you

From the Chelsea Grasslands we transition to phase two of the High Line and into an area more tightly sandwiched between mid to high rise blocks. Branches in the Chelsea Thicket arch over the walkway, creating the feeling of a secret passage. There are plenty of evergreens to help maintain this atmosphere even in winter and it’s almost a relief to have respite from the heart-stopping, magical light of the Grasslands. 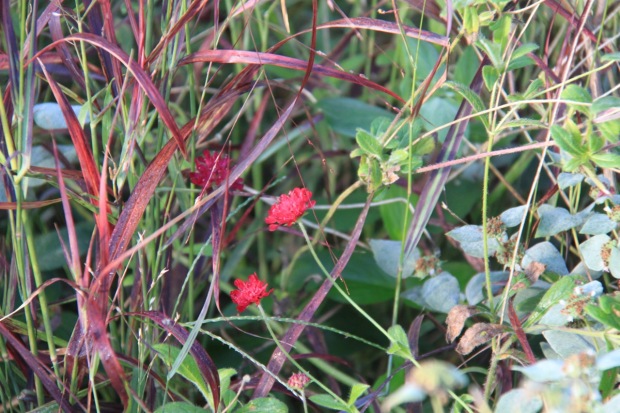 Meadow Walk brings colour once more, with a prairie-like effect. Piet Oudolf talks of his design philosophy as,

‘the idea is not to copy nature, but to give a feeling of nature’.

He enhances nature to bring intensity to these small spaces but most importantly, creates plantings that evoke the reassuring, peaceful, contented feeling that nature induces. He has provided the essence of North American prairies, without the constraints of a purist approach. And he has selected plants that thrive on this windswept line, despite its microclimate meaning it is one horticultural zone warmer in summer and one colder in winter, relative to the gardens just a few metres below. 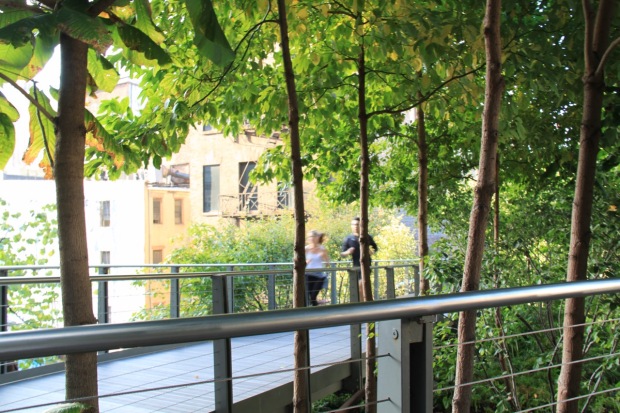 Philip A & Lisa Maria Falcone Fly Over: Magnolia canopies can be admired at eye level

The next section of the High Line cuts a narrow passage between two old industrial buildings and so a flyover, elevated by a further eight feet, was created to bring light in and take advantage of a further change in microclimate. In such a sheltered area, Magnolia are just one of the species that thrive and the experience of walking within the trees, rather than under them, brings an additional new dimension to the Line.

Wildflower Field and Radial Planting: Grasses (dominated by Calamagrostis) pop up from the original rail tracks

Grasses predominate the Wildflower Field in autumn, though they are punctuated with perennials such as Helianthus ‘Gold Lace’ and Symphyotrichum ericoides. Grasses are perhaps the most important element of the High Line, playing a subtle, yet fundamental role. They are the matrix plant for the entire Line, into which various feature plants have been added to provide unique character to each zone. They provide year-round structure and a vertical element to the long horizontal planes, they allow views out to the city and river and they add movement and life in the breeze, in a manner reminiscent of the self-seeded grasses that preceded them. 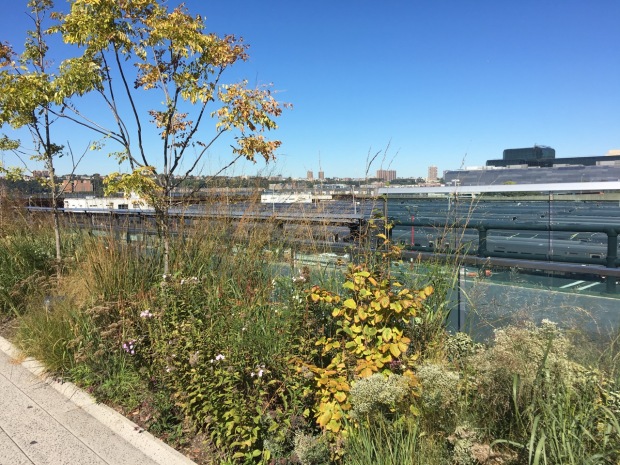 A mix of planted and self-seeded sections make up the third and final section of the High Line, which wraps around three sides of the rail yards. I loved that you could see the trains below–a direct connection to the history of the Line–although this prime Manhattan space is soon to be covered over with new commercial developments. The Interim Walkway was so called as it was opened before planting began, to allow access between completed sections whilst funds were raised. However, the strong appeal of the self-sown garden was soon felt and the Interim Walkway is now a permanent feature. It’s a wonderful piece of history and its contrast with the designed plantings makes the transition from old to new both more transparent and appreciated.

Asters and bees on the High Line

This virtual journey is a definite celebration of autumn (or should I say fall?) on the Line. The colours and forms represent an array of plants resting–well-deservably–into winter, after their tremendous growth and show of spring and summer. Piet Oudolf is the world’s champion of creative, year-round, seasonal interest and I feel the High Line has enhanced my appreciation of this concept; plants can be beautiful in senescence. However, I’ve seen but one short week of the year up on the High Line of New York. I feel there is just so much more for me to learn going forward about this phenomenally special place.

22 thoughts on “A journey of the High Line planting”