I recently read a definition of ‘sense of place’ as somewhere that draws you back time and time again. And so despite staying on the other side of Manhattan during my recent trip to New York – and having an impossibly long list of things I wanted to see and do – my three excursions to the High Line in the space of one week perhaps qualify this urban space as being pretty place-sensical. (Please remind me not to use that expression in my dissertation.)

Persicaria adding an element of colour on the High Line

If ever there was a feel-good project, this is it. It ticks every imaginable box…and then some. I’m not exaggerating to say that the impact of this development is, quite frankly, astounding. It actually makes me quite emotional to think what could be achieved throughout our cities all over the world, by learning from this wonderful, wonderful place. Its effects are nothing short of phenomenal.

Stunning planting (and the Empire State Building) on the High Line

I think its true, wider value (beyond the dazed gardeners like me) really came home to me on the last night of my stay. I was at a cocktail party with many senior New York executives (as you do) and (as it invariably does) my highbrow smalltalk veered off to the subject of gardens by about sentence two. And you know what, I didn’t get polite (if somewhat glazed) looks and comments of ‘how nice’. I got impassioned and informed responses about the remarkable (and tangible) benefits that the High Line has brought to New York. From every executive I spoke to. It was nothing short of exhilarating, for a little gardener like me. 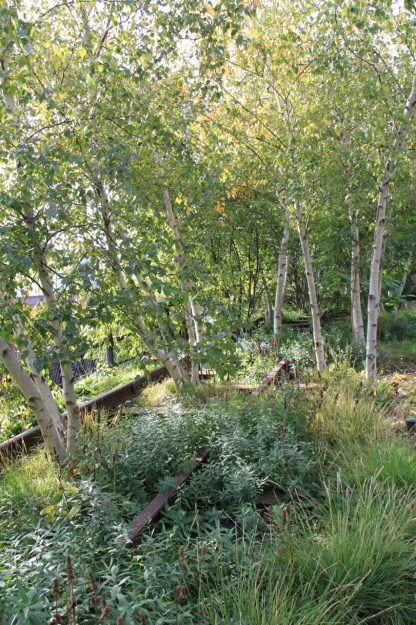 So what is the ‘High Line’ and why is it so good?

Parts of the High Line were still so green, even in mid October

In the 1930s, an elevated railway line opened in Manhattan, carrying goods to and from its main industrial district. However, by 1980, trucking had largely succeeded rail freight and the final train ran along the High Line that year, pulling three wagons of frozen turkeys, no less. A group of property owners then lobbied for its demolition, but one nearby resident, a railroad enthusiast, challenged its removal in court. 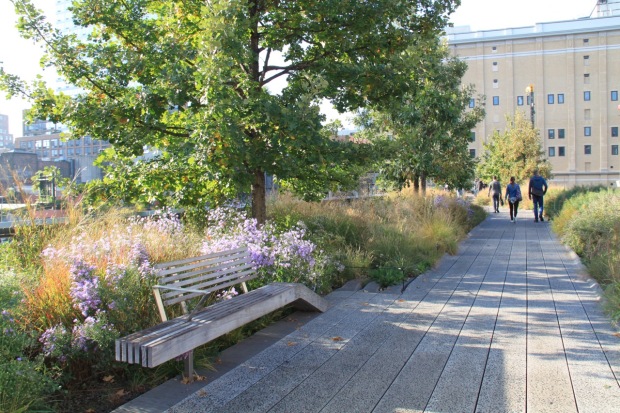 Chelsea Grasslands: I could happily sit all day on the High Line

Some years later, the ‘Friends of the High Line’ was founded by local residents to advocate its use as a public open space and by 2005, CSX Transportation had donated the infrastructure to the City of New York and a design team had been selected. The newly refurbished and planted, 30 foot-high and 1.5 mile-long High Line opened in three phases, between June 2009 and September 2014.

It’s amazing to think this section of the High Line has only been open since 2011. Earlier photos show more views of the city and the Hudson River and many exposed railway lines but the established trees are charming too. It’s fun that it’s such a dynamic space

An urban green space that begins with lobbying from local residents is surely on to a good thing, but the strength of support is really quite staggering. Some years on, the Friends group still raises 98% of the High Line’s operating costs privately and there is a waiting list for many of the volunteer roles. It really has captured the imagination of everyone around it, engaging them in a truly meaningful way.

Joggers on the High Line

I saw people in suits on their way to work, others jogging and even someone dragging a suitcase early one morning. Later in the day, the local ladies-that-lunch were having coffee in one of the many seating areas and a class of primary school children were being taught about native plants. This isn’t first and foremost a flashy tourist destination; it’s a highly used part of the community.

The ubiquitous planting on nearby roof terraces was immediately noticeable: clearly the beauty of the High Line had inspired all around it to create their individual Eden in their own few square metres of space. And maybe this was my imagination running wild, but you could envisage friendly conversations happening from rooftop to rooftop and back to someone on the High Line; the whole area just oozed a community feel.

The soft orangey bark picks up the berries behind and with the Statue of Liberty in sight, makes for a very popular seating area on the High Line

And for anyone that likes to see hard, economic benefits, these are all there to see. It’s been estimated that the impact of the High Line has brought in an additional $900 million of real estate taxes each year and a further $2 billion of new economic activity, all for a single outlay of $260 million. Where else do you see returns like that?

You can almost feel the prosperity this space has brought to the area, with new developments popping up everywhere you look. And people really believe in the impact it has: a whopping $3.6 million was raised by the Friends of the High Line at just one event earlier this year: it’s seriously big time stuff.

I’m sure it was coincidence, but it was amazing how often the flowers seem to coordinate perfectly with features beyond the High Line

And whilst I’d perhaps rather not think about the commercialisation of it all, in reality most would be quite unaware of it. There are no donation boxes, no in-your-face-adverts asking for money, no fees, no pathways through merchandising and no up-selling of any kind what-so-ever. If only our gardens here could operate like this.

Yes, I’m sure something could have been created for less than $260 million, but would it have transformed the area as the current solution has? Yes, untouched – by man or money – wilderness can be even more beautiful, but in the middle of Manhattan, that’s just not an option. To me, it is the world-class delivery of the space that has made the High Line what it is and every last cent spent was worth its weight in gold.

The High Line from below, at the Meatpacking District

It’s not a cheap place to run, with complex engineering, irrigation and fertilisation systems required to keep sizeable trees – exposed to coastal winds – grounded, fed and watered in just 45 centimetres of soil. But plants are thriving under expert – and beloved – care and attention, funded by an almost unstoppable voluntary ‘tax’ on the wealthy, improving the environment for all. It’s hard to see much downside.

120 artists have shown off their work on the High Line, including Kathryn Andrews’ ‘Sunbathers II’ with a giant fan and photo of an ice cream cone

And perhaps its complexity is half its magic. It feels as though the High Line’s immense success is down to a whole myriad of factors which have combined in a yet-to-be-discovered chemical reaction producing synergy of a scale previously unseen.

World-class landscape architects (Diller Scofidio + Renfro) and planting designers (Piet Oudolf) were key elements in this precise, new chemical reaction. It’s one of those designs where you just can’t fault a single thing. It’s so perfect that even the imperfections have you oohing and aahing over how wonderful it is to not be overly perfect.

Even the very straightest sections and narrowest borders of the High Line don’t feel boring; we have much to learn in our small urban plots!

Everything about the design has been impeccably chosen, from each of the 350 species of plants to the somewhat industrial pavers, laid lengthways to accentuate the linearity of the original line. It has taken so much from the old, but integrated it within an appealing, timely, contemporary look. 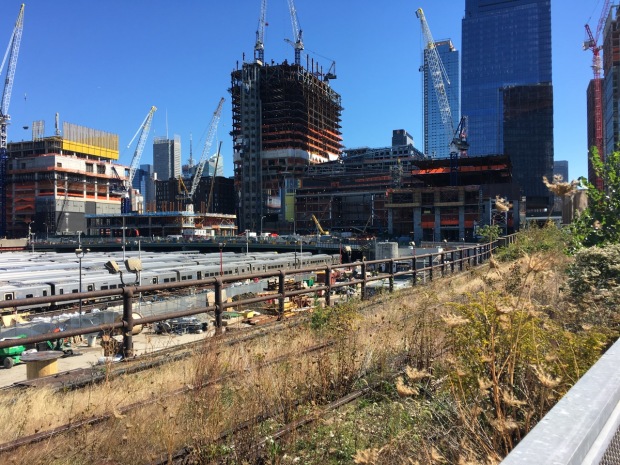 The Rail Yards section of the High Line, part of which has been left untouched to show the tracks in their natural, self-seeded state. And just look at the scale of development in the area

Even the planting is both historic and contemporary, inspired by the self-seeded landscape that grew on the tracks once the trains ceased running. Piet Oudolf wanted to ‘keep it wild’, as is the way of so many top designers today, and nearly half the species are native to the US. Yet he has still delivered great variety in colour, texture and form, providing contrasts both within and between different sections of the line. I think I’ll need to show a little more of the planting detail in another post. 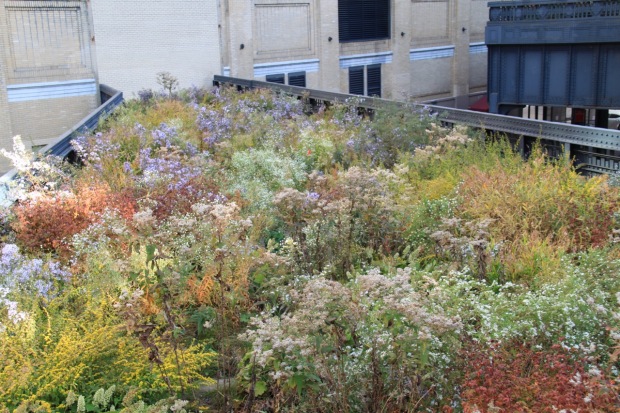 The Northern Spur Preserve is an example of a sponsored area on the High Line. Thank you Christy and John Mack, whoever you are, for this beautiful patchwork of plants

The contrasts are indeed part of what make the High Line so good. At the northern end there are a few streets close by where I found myself pulling my bag slightly closer to my body, but the second you are up on the line, any worrying or negative thoughts instantly vanish. You feel liberated and safe and alive. Quite literally ‘on top of the world’.

The contrast of the new and the old on the High Line. There is certainly some ‘edge’

But you very much feel like you are still in New York. The High Line is trendy and modern, industrial and quirky, world-class and unique. In others words, it reflects all the characteristics of the wider city beyond. It feels so incredibly ‘right’ that you can’t help but feel at ease yourself. I guess it’s that magical ‘sense of place’ thing going on again. Plus that wonderful, if elusive, balance that all the very best gardens find, in just the right levels of contrast and harmony.

The very best thing about the High Line is the message that it shouts to the world. Five million visitors per annum walk along this disused railway track and I’ve yet to hear of a single one disregard it. The enormous social, environmental and economic benefits it brings are indisputable, meaning this project has the capacity to act as a catalyst for so much more. This is not just a wonderful garden that brings pleasure to a handful of privileged people; it’s a huge and powerful machine that has the potential to benefit mankind.