It is possible to be winded by a garden? For a place to feel so ‘breath-taking’ your body actually shuts down for a second or two? 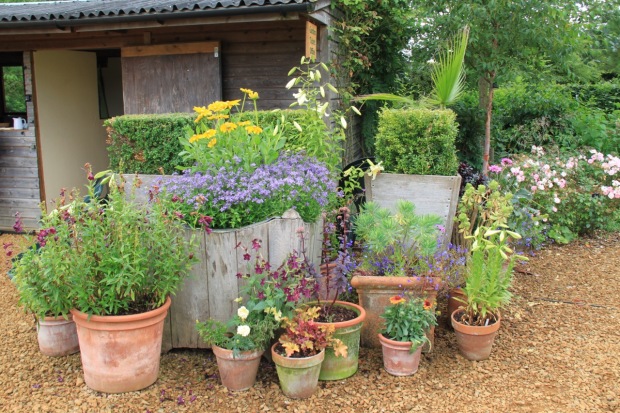 I’d experienced something a little like this last year, as the view across Lord Howe Island revealed itself, upon reaching the top of a mountain climb. But in a garden? Clearly, I’m emotionally affected by magnificent gardens, but had I actually found it hard to breathe in one? 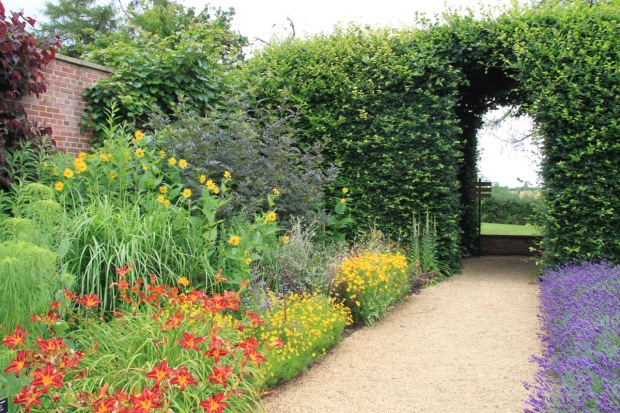 Whatever the previous answer to that question, a trip to Broughton Grange resolved the issue firmly and squarely. Better than Sissinghurst? Yes, I think I can even say that.

Even the greenhouse at Broughton Grange was an aesthetic delight!

James Golden, of Federal Twist, had recently reviewed Broughton Grange (thanks Catherine, for sending me the link!) and pointed me towards a video by its designer, the incredible Tom Stuart-Smith. You’ll remember him from the very wonderful Le Jardin Secret in Marrakech. I’ll remember him for emailing me shortly after I posted that article, asking if he could use some of my photos! 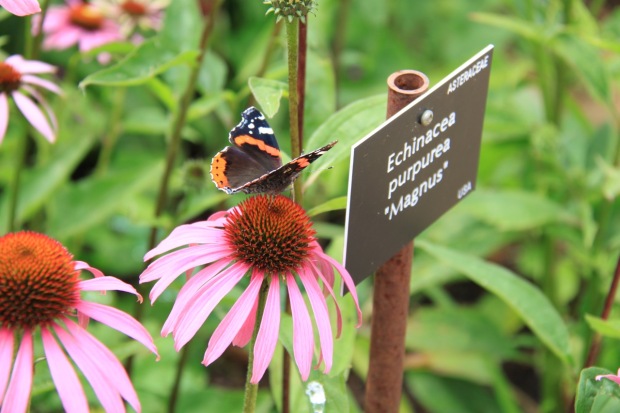 A garden full of wildlife is a happy garden (as is one that has names to help us along)!

Watching the video, the genius of Tom Stuart-Smith – and his incredible likability – is plainly obvious. But let’s explore the garden first and then come back to some of his throw-all-ideas-about-garden-design-out-of-the-window-and-start-again revelations. 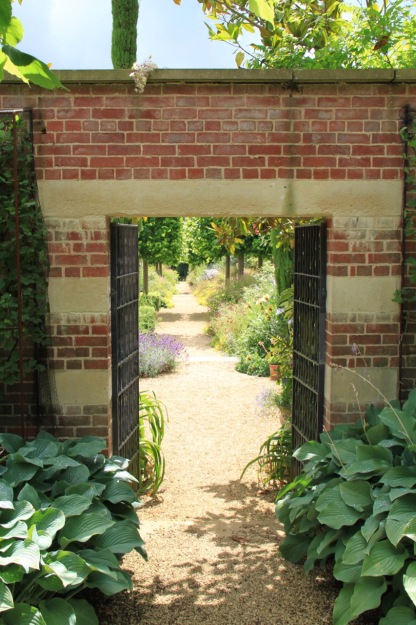 If ever there was something calling you on, it’s this gateway to the Broughton Grange walled garden!

As you approach the very solid gateway to Tom’s walled garden, you know it’s going to be special before your first step inside. It somehow oozes magic beyond its footprint. And as you enter, you see the beautiful rolling fields of the rustic landscape in front of you; the garden entirely integrated into this stunning backdrop. 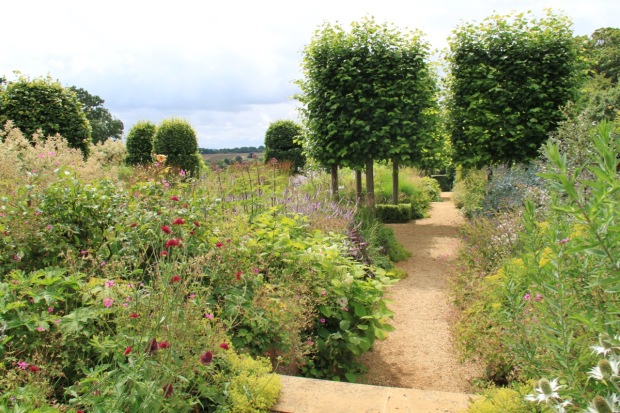 Soft, overflowing borders are broken up with pleached lime platforms at Broughton Grange

Tom describes the garden as three-tiered, although I’d argue (probably because I’m trying to prove I’m better at maths than Tom, if not garden design) there are four. 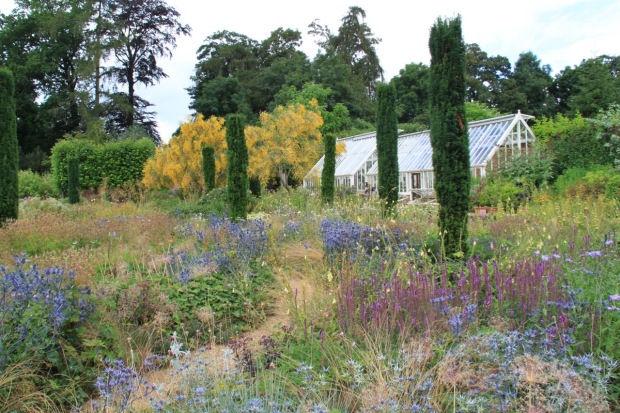 The Upper Terrace at Broughton Grange

Passing the most beautiful – inside and out – greenhouse in the world, the upper level of intense, almost meadow-like planting reveals itself. Sited on impoverished soil, the dry Mediterranean plants form a field of growth – uniform in height but with stunning contrasts in texture, form and colour – punctuated by slender yew columns. Narrow pathways through the planting allow you to find your own journey of exploration and immerse yourself into, and almost be consumed by, the plants themselves.

The middle terrace is dominated by a large, geometric pond, which Tom used to deliberately create a void; an empty space that you yourself can’t occupy, ensuring the garden takes primacy. The soil here was improved to encourage lush, vibrant growth of more prairie style planting and clever sight lines structure the visitor’s experience. Topiary figures are used in a ‘semi-anthropomorphic’ sense; to give the impression of some other presence to the garden. A hint to prior occupation, as if you are just a visitor observing other goings on.

The primary-coloured bedding parterre of the lower terrace is nothing short of a shock to the system, after the sophisticated plantings above. But it is a bedding shock of a quite pleasant nature, for it is really like nothing you’ve seen before. The irregular hedges are laid out in the cell patterns of leaves from the wider garden – as seen under a microscope – although this design inspiration is subtle, not shouted about. Tom prefers visitors to be free to let their imaginations go in their own directions, and indeed mine told me the Buxus must be in the shape of neighbouring fields. The section of planting in the bottom right of the photo was a trial this year; amusingly, the gardener we spoke to enjoyed telling us that Tom’s recent experiment clearly hadn’t worked. I decided not to mention the obvious question of whether it was more of a design or a horticultural issue. But to be fair, often the two are the same.

Possibly the nicest ‘hedge’ I’ve ever seen, at Broughton Grange

Beyond the lower terrace, Tom has created perhaps my favourite area of all, which starts to blend garden and landscape. The most stunning ‘hedges’ have been formed with a mix of very complementary plants, providing both uniformity and variety. On the other side, a sloping lawn (OK, perhaps it’s not really a terrace) with perfectly manicured topiary is a cultivated version of the fields and shrubs beyond (shown also in the feature photo at the top of the page). Incredibly simple, but incredibly effective. 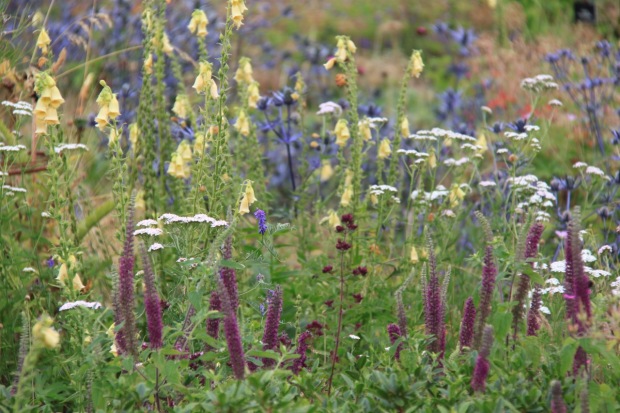 There is no question that this garden contains world class planting. But why is it so good? In the video, Tom describes three characteristics of great gardens:

i) permeability – the idea that you can discover a garden in your own way, without predetermined routes or instructions

ii) complexity – when Tom studied Zoology at Cambridge, he learnt that the more complex an object, the more responsive animals are to it. He describes complexity as “almost a moral necessity” in a garden (gorgeous!) and an essential element to ensure it “runs with the grain of nature”

iii) identity – that a garden has a distinct and memorable character and that it is defined, often by a distinct territory (as at Broughton Grange, as well as William Kent’s Rousham garden), i.e. delineated by clear boundaries that separate it from meadow or paddock

I was happily linking these three elements to my own ‘bold, fit and character‘ thoughts, forcefully moulding them into the same shape. But hang on. An identity with clear boundaries? Haven’t we always been told to merge garden with landscape? Indeed, hasn’t Tom delivered that here?

Fruit, vegetables and cutting flowers at Broughton Grange; so lovely that these weren’t tucked away out of sight

And I started to explore some of Tom’s exotic (think tree ferns) London courtyards and the – quite frankly – random parterre at Broughton Grange. Arguably the fit is terrible. But perhaps it is the contrast with their surroundings that makes them so wow. I’ve often viewed ‘bad fit’ gardens as bad taste, but you couldn’t call these bad taste. 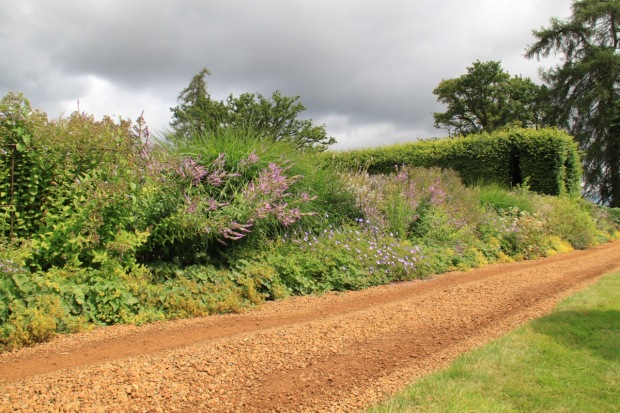 Perhaps, as a garden designer, the next step on from ‘fitting as closely as possibly’, is actually to deliberately design in tension. A bit like a quote I read this week about brown shoes, which went, “the only thing posher than knowing the rules…is having the confidence to break them”. It seems I need to poshen up!

Wonderful reflections created by the still, still water at Broughton Grange, leading your eyes to the hills beyond

We see contradiction throughout this garden. The tall yews in the Mediterranean planting, the geometric pond against the rolling hills, the stark colours of the parterre. I’ve very much grasped the idea of contrast within planting, but I’m now thinking I need to expand my thoughts around contrasts within the setting. Perhaps it’s not always about making it look as though it’s always been there, as if it’s meant to be. Perhaps tension is what takes it to that next level. Tension without bad taste and without bad fit. Gosh, gardening is a never-ending learning! This latest thought seems quite a challenge to grasp. Possibly the thinnest line of all between genius and disaster!

Views out to the arboretum from the Middle Terrace (looking across the main slope of the garden, rather than down it); retaining walls sit beyond the immediate planting, facing the arboretum

Probably the one remaining question I have of this garden, is the fit with the walled garden ‘sides’ and their surroundings. The terraces roll down beautifully and work perfectly with the fields opposite, but I can’t help feel the “simple box”, as Tom describes it, slightly jars on the edges. Tall, straight lines down the slope of the land – a slope which meanders in every direction – just seem a little harsh against these soft, meandering curves.  A little ‘plonked’, rather than nestling. Just on those sides. The sight lines out are wonderful, but I was very conscious there would be quite odd retaining walls looking back from the arboretum. Even if you couldn’t see them, I was somehow aware they must be there, jutting out of the space. Is this the one weakness in the design, or it is something else I’ll learn to appreciate in time? 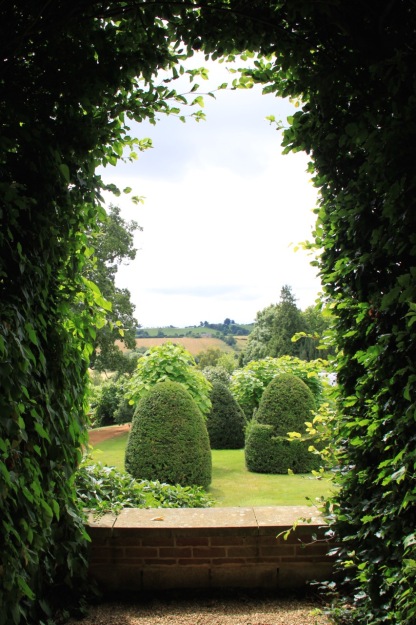 Which brings us back to Sissinghurst. How does Broughton Grange compare as far as world class gardens go? I don’t think anything can touch Sissinghurst for history and atmosphere. The bare bones of the buildings give it such a head start. Even the splendid views of Broughton Grange don’t quite match this. But I think Broughton Grange is so exciting because it is contemporary. Tom has taken old ideas of the Arts and Craft style and recent ones of the New Perennial Movement and fused them to create something quite different. I think it’s that which makes this garden so exhilarating. It isn’t a museum, it’s current thinking, optimised for today without any baggage from the past. It delivers something original and fun, pure and thought-provoking. 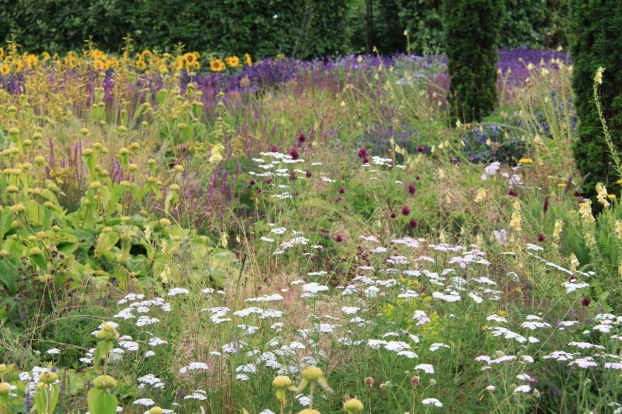 Delicate white yarrow lifts the soothing purples and soft yellows at Broughton Grange, with sunflowers in the cutting garden beyond

I’d so encourage you to go, if you do get the chance, but just make sure you don’t forget to breathe – as I did – whilst you are there!

Just one of the fabulous sight lines at Broughton Grange, pulling together a variety of diverse elements