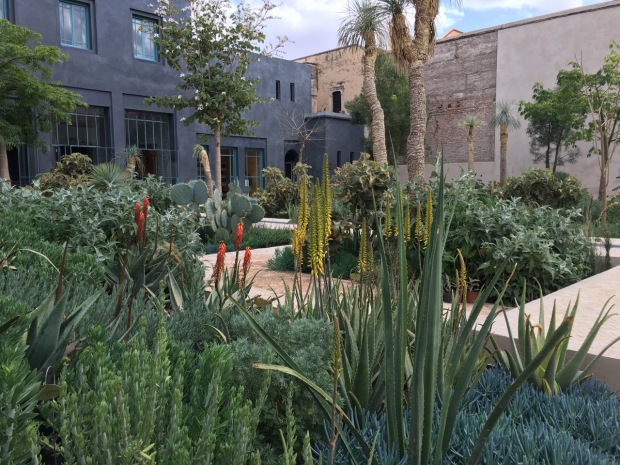 Oh, boy. We may not be having an awful lot of luck buying houses at the moment, but this week certainly made up for it. It just so happened that a brand new garden, one that rivals the world famous Jardin Majorelle, opened in Marrakech and we happened to quite literally stumble across it on its very first day. Oh, and then chat to its owner and project manager. That’s pretty lucky. 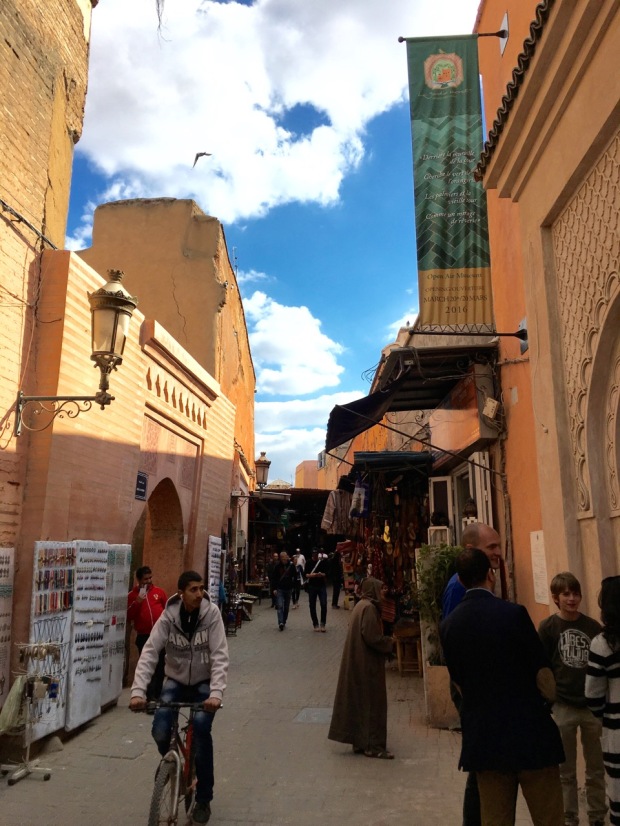 One of the wider streets in the medina, from which Le Jardin Secret opens out – good job I looked up and noticed the green sign (although I could probably sniff out a garden, sign or no sign!)

The central, walled medina (old Arab quarter) of Marrakech is a series of tiny passageways, too narrow for a car, but just right for four or five lanes of bikes, scooters, motorbikes, donkeys, plus a couple for pedestrians and a market stall on either side. To an English country girl, it is mayhem. 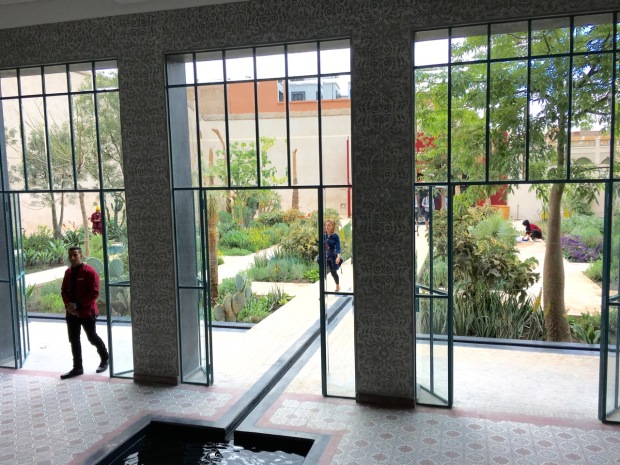 The passageways have high, windowless walls, protecting the houses within them, decoration reserved for inside. Hence the name, ‘Secret Garden’ and the incredible wow factor as you transition from the most built up city I had ever seen, to this tranquil, serene paradise. 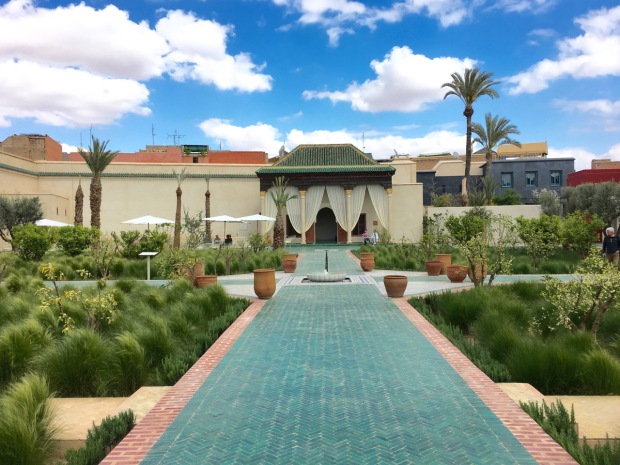 We walked around open mouthed. The site used to be the riad (house with central garden) of a nineteenth century Medina Governor, but originally dates back to the sixteenth century . Fallen into disrepair, a visionary took over the property and in some three years, transformed both architecture and green spaces, restoring it to its former beauty (and then some, I suspect). 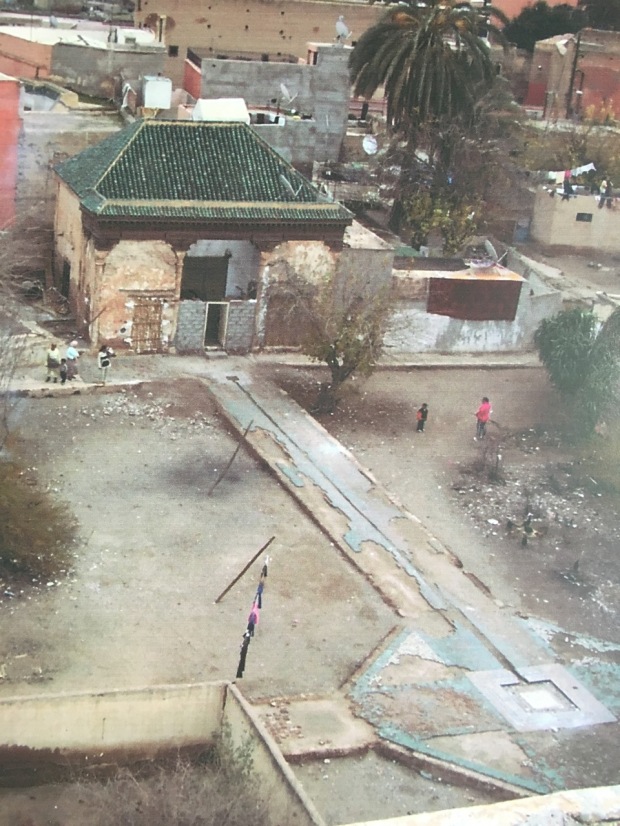 Before renovations began (you can see the same green roof in the photo above); what a transformation!

When we spoke to the project manager, his passion for Morocco really shone through. Having lived here for 15 years, he knows the culture well and wanted to create something for the Moroccans. He wanted a large Islamic garden, reflecting the importance of green spaces as stated in the Quran and he wanted a second area, reflecting the experimental nature of Moroccans, to create something quite different. He spoke of the hard work and honesty of the workers, who made it all possible. 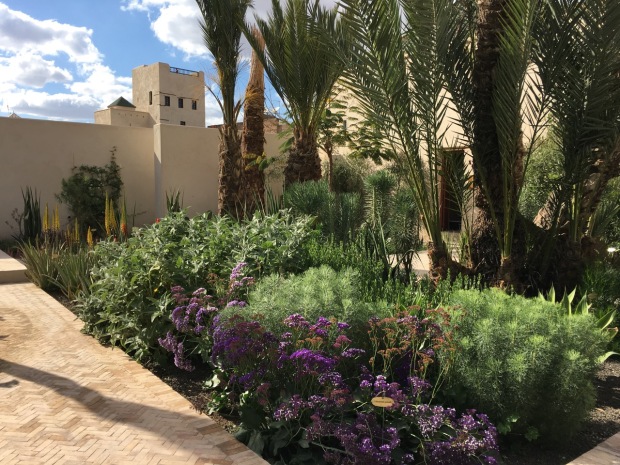 The contrasts of textures work fabulously

It is hard to believe that this huge site was renovated using donkeys for transport. All the rubble being carted out at night whilst the streets were quiet. And to think that, in an earlier life,  I had considered the logistics for building Terminal 2 in the middle of Heathrow Airport, a challenge. 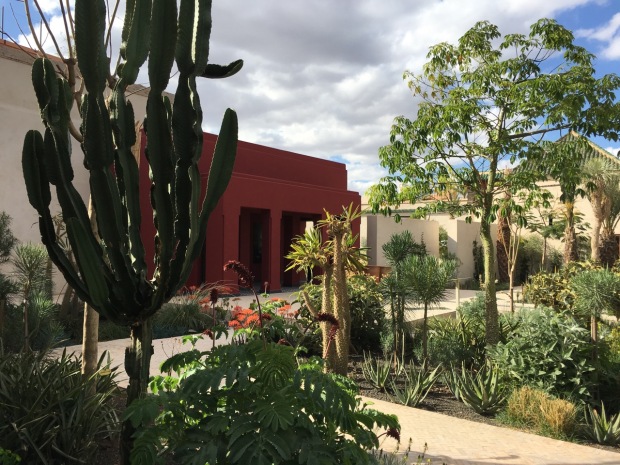 These red walls lifted the garden without taking over;  just the perfect shade

But they certainly didn’t let logistics get in the way of the final result. Commenced just three years ago, it is incredible the ambience they have created on day one. 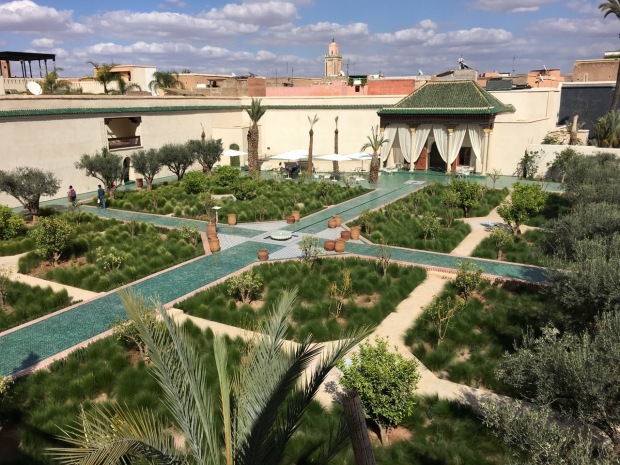 Le Jardin Secret is two interconnected gardens: an Islamic garden and an exotic garden. The larger, Islamic garden is divided into four quadrants in the traditional style, with a water feature in the centre. It is sufficiently generous for each quadrant to again be divided into four, each anchored with a further water feature, just as it likely existed in the eighteenth century. 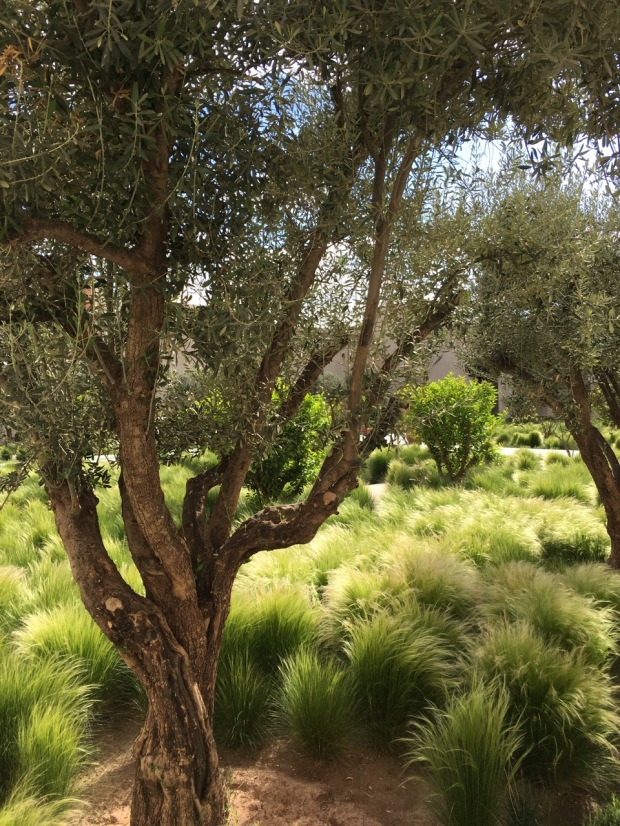 The Islamic section is filled with plants from the Mediterranean, North Africa and Persia, following strict geometric rules, in which ‘the Muslim order asserts itself over the wild disorder of nature’. Yet there was much fluidity in the garden, from the movement of the grasses to the plays of light and sound of water and the birds and bees, revelling amongst abundant citrus blossom. 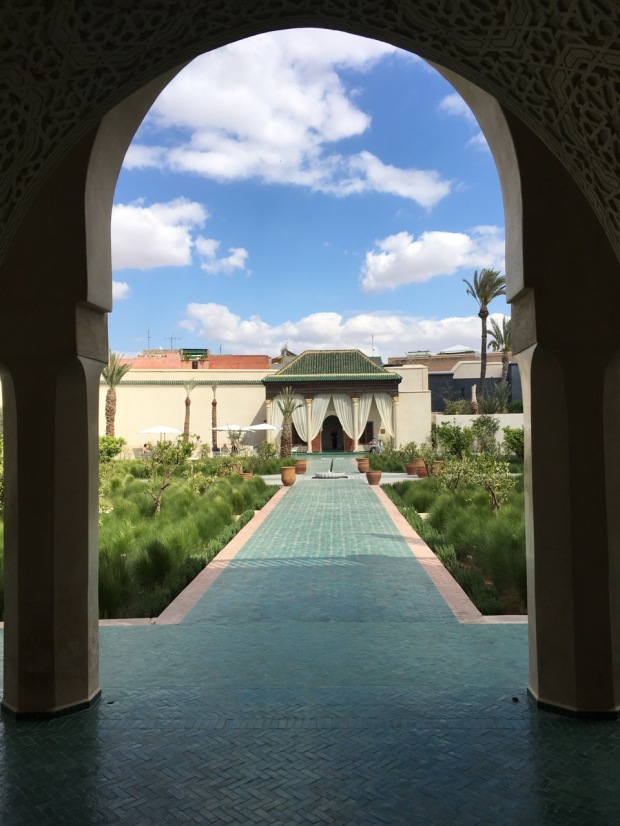 Despite selecting plants of local origin, Marrakech’s dry climate means that irrigation is still required. During restoration a large tank was uncovered and restored, along with gravity-fed rills that feed each bed. Indeed, heaven is described in the Quran as a ‘garden in which streams flow’ and water ‘represents a surface in which the soul can contemplate its reflection, enter its own world and purify itself’. Water is absolutely central. 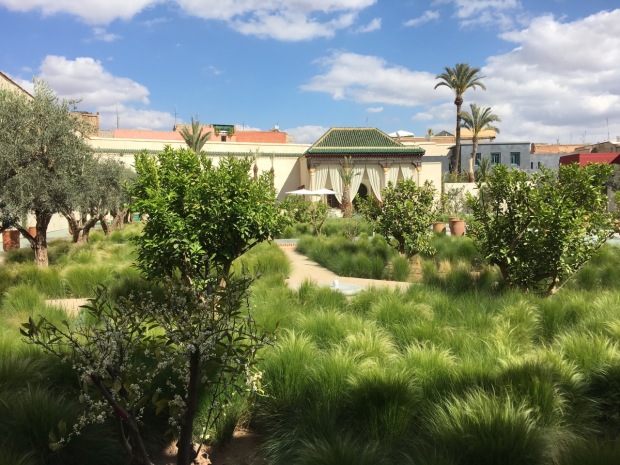 Just look at the lushness and movement in these Stipa tenuissima

It is the simplicity and structure, complemented with this fluidity, that makes the garden so contemplative. It is perfectly balanced, holding your gaze, without over stimulation. Situated next to the crazy hubbub of the city, it almost forces you to reset your pace, making you stop and take a step back, re-evaluating what it’s all about. 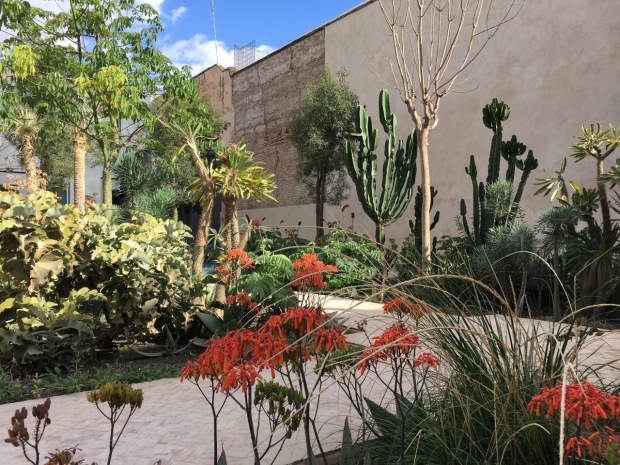 The neutral paving and walls, retaining some of the original finishes, really accentuates the dramatic plant forms

The exotic garden is a perfect companion: enough structure and common threads in the hard landscaping to connect the two, whilst adding a whole new dimension. It contains plants from all over the world – I think I counted six continents – and yet the planting hangs together as if a frequently seen combination. 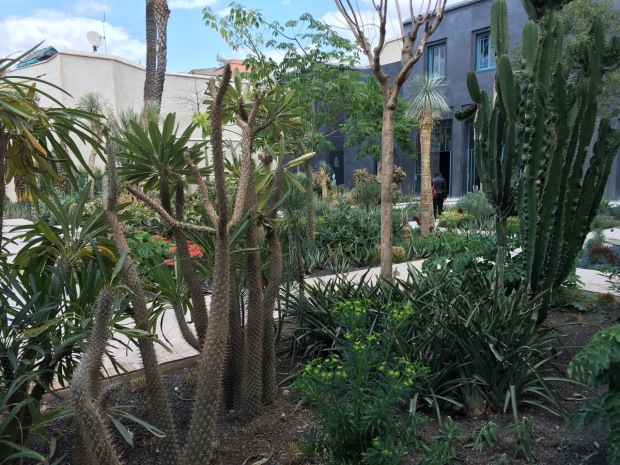 Texture and form are the two features that stand out in this garden, unlike colour, in so many others. But the garden maintains a lush, soft feel, so hard to achieve with dry climate plants. There are similarities to the Jardin Majorelle and yet it is entirely unique, too. The hard landscaping is more authentic and traditional and colours, whilst bold, more subtle, yet equally effective. It is perhaps a little more sophisticated and yet not in a way that equals boring, as can so often be the way. 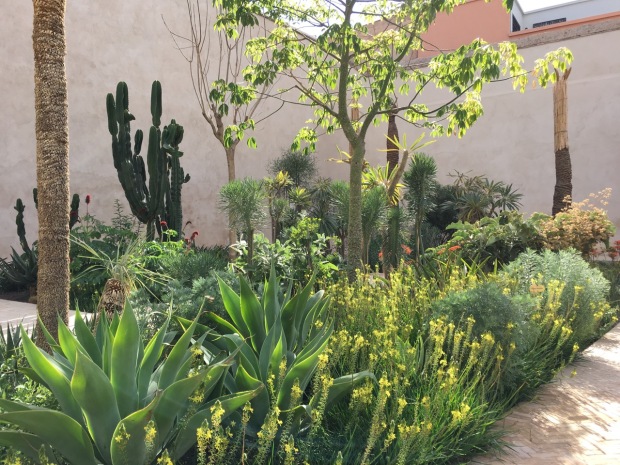 Yellow Bulbine frutescens looks magical next to Agave attenuata, one of Sydney’s most common plants. So why haven’t I seen (or indeed used myself!) this combination before?

The only disappointing thing about this garden was who designed it. I immediately wanted to find out who the local designer was, to do what I could  to make him or her a hero, to meet them if possible. This was outstanding garden design. And then I heard. It was Tom Stuart-Smith, the eight times Chelsea gold medal winner, from London. 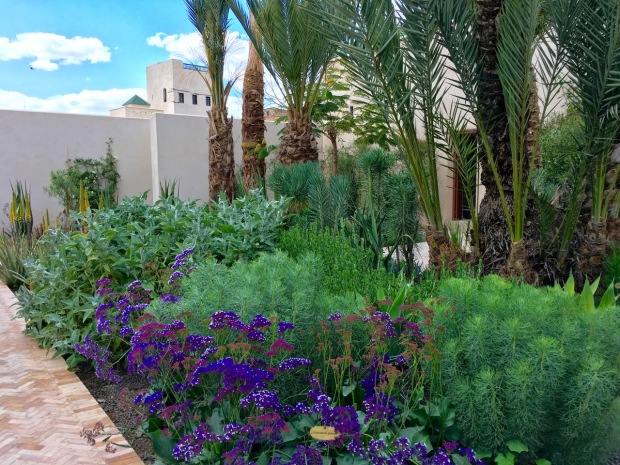 This could almost be an English herbaceous border

Paul couldn’t understand why this was so disappointing. I just couldn’t believe that having stumbling across something I loved, in Morocco of all places, it had to be a famous English designer. I guess I hoped it was a sign of widening talent, a sign of spreading world class gardens. I felt disappointed that this local garden wasn’t locally inspired. 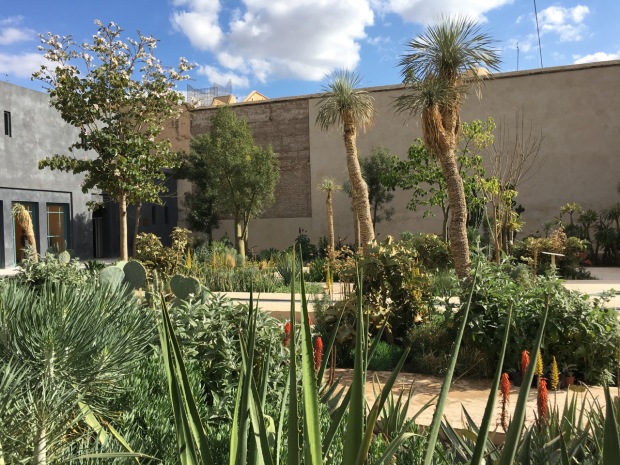 I could almost be tempted to use mature plants in future gardens after seeing this!

The project manager explained that it wasn’t for want of trying. But to have a vision, set down on paper from the start, was not the way of local designers. With such an aspirational, long term and expensive project, the risks were too high to operate in any other way. I had to reluctantly agree. 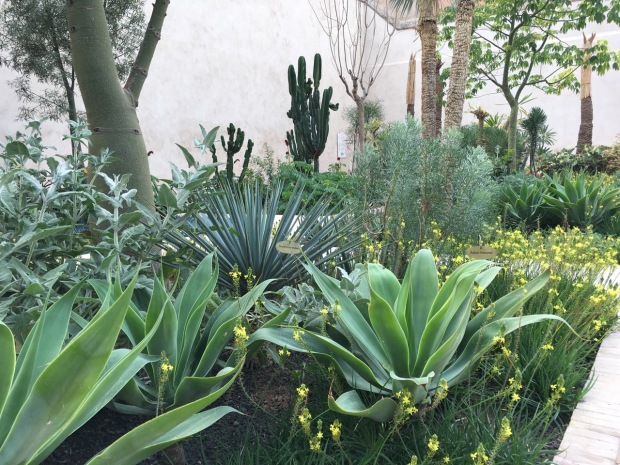 A mix of dry climate greens – silvers, sages and very dark greens – softened with a mix of textures

But this wonderful garden, so serene, so connected to its history, yet with a contemporary twist making it so appealing, should indeed be celebrated to the highest degree. Paul has created a page for its first TripAdvisor review, I’m more than happy to reiterate (if not make) Tom Stuart-Smith’s heroicness and there is one other blessing in disguise. Tom Stuart-Smith has recently been appointed designer for the new RHS Bridgewater garden, near Manchester, that opens in 2019. So if I can contain my excitement long enough, I’m quite certain we have another huge treat in store! 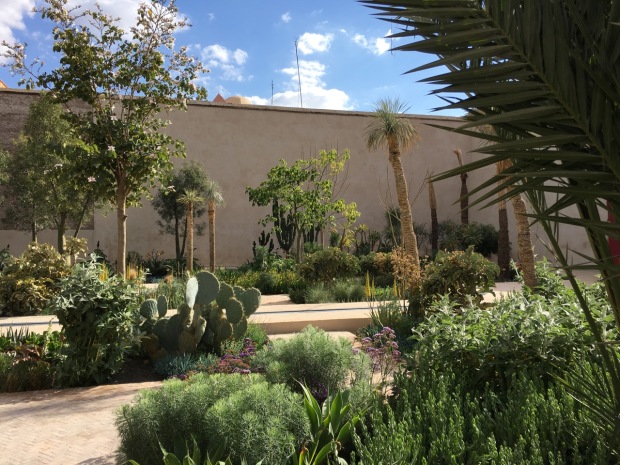 Prickly pear (Opuntia; centre left) is a weed in this region and yet in a controlled manner, it looks fabulous