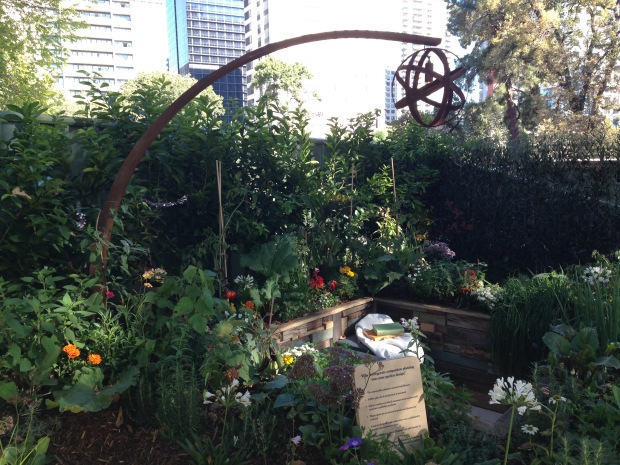 I’m back, eventually, after a very long four hour flight home from Melbourne. Yes, I know I live in Sydney, it should be just over an hour, but just as we were coming in to land this morning, they decided to shut all runways, resulting in a little detour to buy petrol in Canberra, some 300kms away. I really felt for Qantas; they had put on seven flights between 7 and 8am, from Melbourne to Sydney alone, getting everyone back from the garden show (and perhaps a few from the cricket world cup) and then the rain falls.

Grevilleas and Kangaroo paws at MIFGS

But it was all well worth it. The show was excellent. According to Paul, the cricket was pretty good too, although you Kiwis may not agree. But I digress. The Melbourne International Flower and Garden Show. MIFGS (“miff-gus”), for short. Utterly inspiring, yet again.

I’ve written up the eight award winning show gardens here, in the ‘Inspiration’ section of my website. Photos and an overview of my thoughts on each one. But I thought I’d share my overall highlights with you as a blog post. 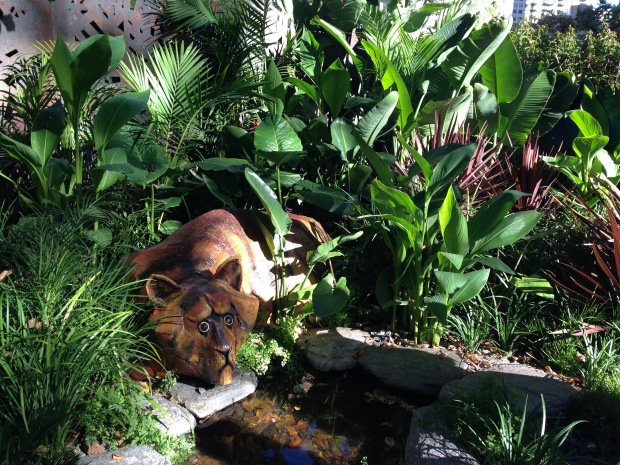 ‘Rousseau’s Jungle’ MIFGS Achievable Garden by Heather Forward, who created the tiger as well as the planting design – what a very talented lady

My overriding excitement was that there was a trend towards plants and away from hard landscaping. Hurrah! Yes, we absolutely need careful consideration of both for the ultimate garden, but we have been through a phase where paving is king and it seems as though there is light at the end of the tunnel. I don’t mind hard landscaping and planting having equal impact, I don’t mind planting dominating, but when hard landscaping is the feature with a few token plants, it leaves me feeling quite sad for all that is lost. 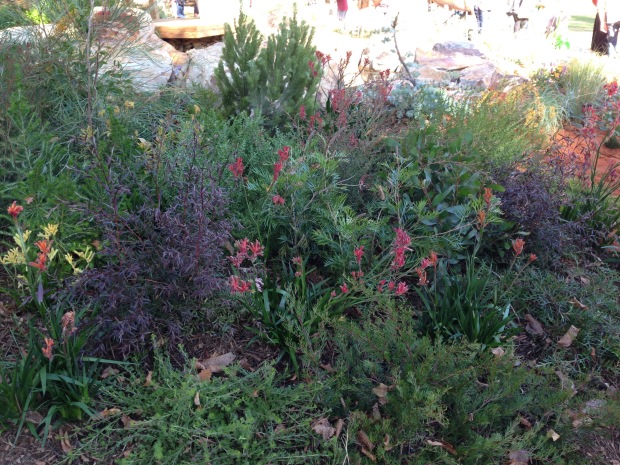 MIFGS also reinforced the fact that gardens touch me in different ways. It isn’t necessarily the gardens with the greatest level of skill that are the ones you fall in love with. With professionally designed gardens, it is so often the thinking behind them, the attitude of the designer, the passion or lack of it that has the impact. Expectations are everything and a mediocre garden from a passionate, humble, truly engaged designer, for me, trumps a good garden from a highly commercial, ‘sausage factory’ designer almost every time.

So, my highlights. Something that really came home to me, was how much I miss bees. I’m actually quite scared of them, as anaphylactic shocks run in my family and I have yet to find out if they have passed to me. But when you see them everywhere, you realise how much life they bring to a garden. The gentle buzzing sound, the movement between flowers, the hive of activity, the productive role they play.

I can only assume that there just aren’t enough flowers in our neighbourhood. I don’t think everyone is going around spraying vast quantities of chemicals, I just think we have a lack of flowers. Everything is about ‘year round interest’; typically evergreen foliage plants that might flower for a few weeks, but really don’t add up to anything much. I’m going to start a flower crusade.

Many of my highlights centred around flowers. I am clearly having withdrawal symptoms. Take this cornflower meadow, for example. How unexpected is this in Australia?  But how soft, how naturalistic, how beautiful is it? I couldn’t help but smile as soon as I saw it.

5,000 Poppies at MIFGS. Inspired by Lynn Berry and Margaret Knight

And these poppies? I’m ashamed to say that when I first saw them, I thought it was a poor take on London’s Tower Bridge poppies last year. If you can’t take an idea, develop it and make it at least as good, don’t take the idea. After a chat with the awe inspiring Lynn Berry, I came away thinking these were far superior to London’s efforts (see photo of London’s poppies here).

A social media campaign with her sister-in-law, Margaret Knight, sought 5,000 crocheted, red poppies for Anzac Day 2015. Several months later and Lynn and Margaret have collected over 250,000 crocheted poppies, 5,000 of which were displayed at MIFGS. Just looking at the field of poppies was quite remarkable – what a wonderful community effort it was. I can’t help but feel more attracted to this, than London’s expensive art installation. It is a lovely story. 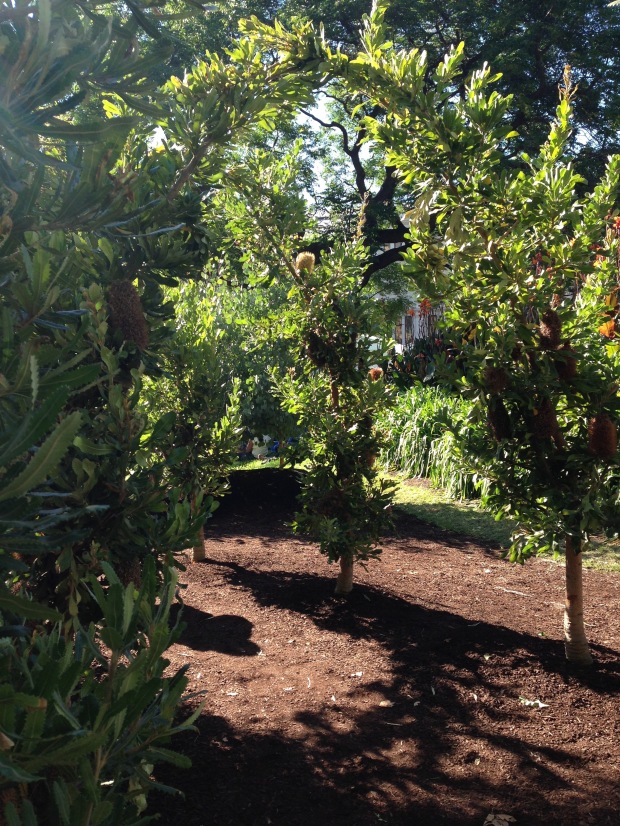 Phillip Johnson’s Banksia archway at MIFGS; an innovative use of natives

I also noticed more natives than in previous years. Possibly, I just noticed them more. I love them more and more each year I live here, after all. But it was wonderful to see. They are so much harder to design with; so much less history to take inspiration from. But good for those who work with them and help us on that journey.

I also loved the autumnal colours. I really feel the cold and really, really dislike feeling it. But seasons do connect you with nature in a way that year round warmth can’t manage. I think I’m exceptionally lucky to do enough travel to experience different seasons, but get to live in a warm city for the majority of the time. 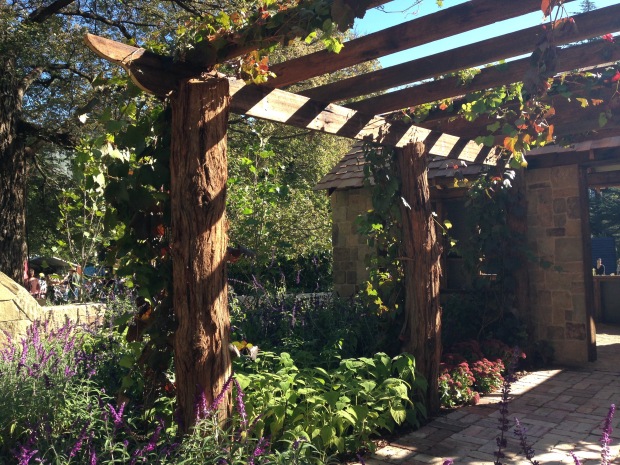 Another thing I loved was the use of older materials. Not necessarily recycled ones, but ones with some patina to them, ones that feel they have life beyond a manufacturing plant.

Old and recycled materials create a vintage setting at ‘The Crossroads’, an Achievable Garden by Ben Newell

Which brings me to my next highlight. The ‘Achievable’ gardens, designed by students from the various horticultural establishments around Melbourne. These small gardens weren’t about demonstrating wealth via your garden, they were thoughtful, meaningful expressions of a love for nature; many of which you would never in a million years think had been created by someone still undertaking their formal education.

Jai Cheswick’s Urban Temple at MIFGS. I’ll share photos of the inside on a separate blog post – it is truly exceptional

And I loved the innovation demonstrated, with Jai Cheswick particularly coming to mind. A real move from the typical show garden we see in Australia. (I’ll share more about his garden, soon).

Just so much to take away and digest and enjoy from one show. I do hope the photos inspire you too. Which bits jump out and appeal to you most?

The Inspiration Wall at MIFGS 2015. A rainbow of photos taken at this years’s show. Stunning!