Us humans are complex things. And if there’s one thing my Master of Horticulture analysis has taught me, gardens are not lacking in that department either. Put them together and you’ve got a real muddle.

But there’s nothing like truly immersing yourself in something for 48 hours to bring some clarity to a muddle. And that’s what Chelsea has done for me this year.

There’s such an enormous range of interests across the horticultural world. Updates fall into my inbox from uber-excited colleagues who have just learnt that lettuces can now be grown on the seabed, in pods with lighting powered by wave energy at some 50 metres below sea level… In all honesty, that’s not the side of horticulture that really does it for me.

What I’d always thought I was most interested in, was beauty. Combining plants in ways that create stunning environments. But I’ve realised over the last two days that actually, that’s not it. What I’m really interested in, is how plants can bring joy, uplift us, make us feel better about the world. Make us feel better in ourselves. And recent research has told me this is much more complex that simple ‘beauty’; other factors influence our mood far more than our aesthetic preferences. Fascinating, hey? (Or perhaps you’re a seabed lettuce type? And that’s OK too!)

Just one of the wonders of Chelsea for me this year was James Basson’s Maltese quarry-inspired garden. Or more precisely, people watching at James Basson’s Maltese quarry-inspired garden. I think I learnt more about ‘positive garden visiting experiences’ – one of three objectives of my master’s thesis – in an hour at James’s garden, than I did in nine months of reading the subject.

And I’ve woken up this morning all inspired to see if I can bring even a chink of joy/upliftedness/optimism to everyone in response to James’s Best in Show garden.

As you turn the corner from the London Gate entrance, this is what you see.

You could almost hear the ‘oh’ from each and every visitor as they caught their first glance of it. Not an ‘ooo’ or an ‘aah’, but a very short ‘oh’. Then, quite often, a ‘this is best in show?’. I even had someone turn to me, standing next to the garden, to ask ‘can you tell me where the Maltese quarry garden is?’. There was almost a disbelief that this could possibly be Chelsea’s best in show.

There were many, many people thinking they were uniquely witty in saying ‘well, at least they’ve got the foundations in’. All of them then given a sharp look by their wives (yes, it was the men), accompanied by a stern ‘shhh’. There were those that clearly felt quite ‘downlifted’ by it, comparing it to a cemetery and even the Memorial to the Murdered Jews of Europe in Berlin. I did have a chuckle when one lady said ‘look, the stone is chipped, right there‘, thinking they really should have moved the damaged bit to the back so no one could see it.

The quite monumental pillar giving depth to the ‘quarry’

But I don’t mean to belittle anyone. I also had a bit of a sinking heart when I first saw it. It was just so, well, concrete-y. I really think the Concrete Association should have had a stand next to it as I heard that word a million times. ‘I don’t get it, what’s the concept?’, I heard. ‘The concept is wild and wacky with lots of concrete’, the response.

James included many different ecosystem types in his garden: light and shade, dry and boggy

There were many who took a glance, made their very witty remark and made their way to the next garden. There were also those who really tried to like it, ‘I like the…architecture’, and another, after a good solid stare, ‘I like the purple flower’. And there were those who politely stated, ‘it’s not my thing’. 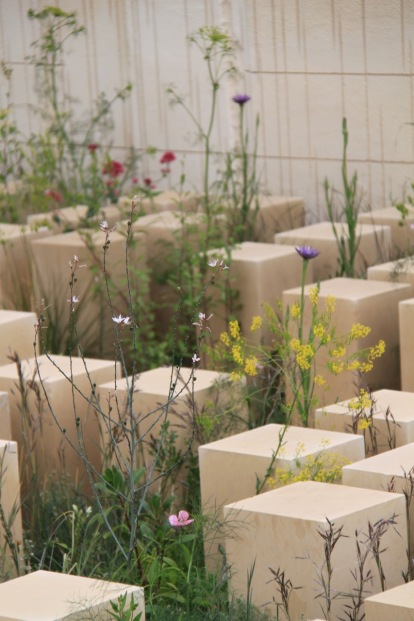 But those who stopped and looked, those who got their Chelsea Show guide out to seek an understanding of just what this garden was trying to say to them, seemed to go through something of a metamorphosis. One lady, after a few minutes taking it all in, said, ‘as a kind of concrete and rubbish planting, I think it’s quite nice actually’. And another, who silently considered it for some time with her friend, finally remarked, ‘it is quite lovely when you stop and just let it wash over you. It is a really quite beautiful garden’.

A rustic dining table draws your eye across the quarry

I liked this particular lady a lot. Not because she liked the garden, but because she came with an open mind, which she used to see and learn something new. We all like very different styles of planting – naturalistic was always going to play to my loves – so it’s never wrong to dislike something. But I felt it a shame for those – with very expensive Chelsea tickets – who gave it a cursory glance and moved on. At least take it in and make a conscious thought on it.

A rare moment of abundance

But the objective of this isn’t for me to be judgemental (even if I can’t stop myself at times). Standing at the garden, absorbing it and the mood around me, you could feel the sizeable shift in people’s feelings toward it over time. That evolution from ‘oh’ in surprise, to ‘oh’ in understanding. Those who took the time almost always found something about it. 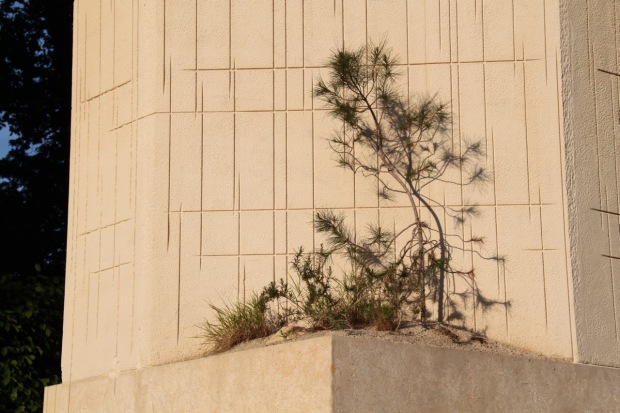 The ‘lone pine’, finding its niche way up high on a ledge

James says the garden is about, “man and nature reacting together over the course of time”, and the importance “to preserve the fragile balance and celebrate the wonder”.  James himself is quite an inspiration to me. I don’t believe he wanted to shock to impress, I think he wanted to do something different to try and make a connection between the natural world and man. To say that anywhere can have its pockets of beauty. 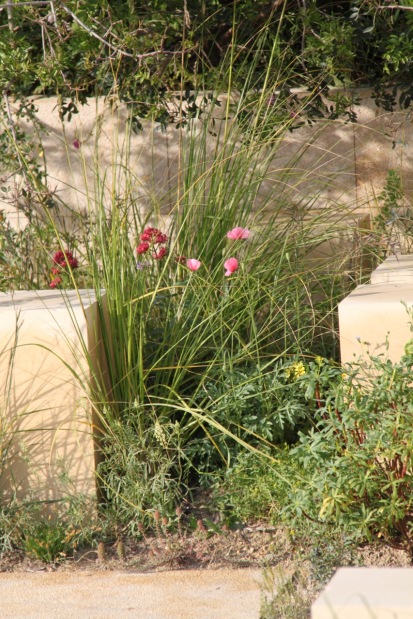 Even untouched, nature will do its thing and start to populate a disused quarry with vegetation and flowers. I think he wanted to suggest we should give beauty a chance and that if we look for beauty it is everywhere around us. We can delight in a small single flower growing in a crack in the paving if we choose to. It’s up to us whether we embrace the natural world and work with it to bring joy to ourselves and those around us, or whether we simply dismiss it.

This is not a garden I’d want for myself. It is stark and it is bare; it is harsh and geometric in the extreme. But when the light warms the stone, the umbels form delicate shadows and a particular combination of plants catches your attention, it can be pretty moving. A reassurance of the power of nature to put right the most invasive of man’s activities on earth.

And a reassurance that man can do wonderful things and bring great joy to human kind when he chooses to embrace nature and create something that warms his heart.

‘Celebrating the wonder’ is such a fabulous phrase. Can you celebrate the wonder with me, or does this garden leave you entirely cold?

Really, what’s not to love?