Sadly, for me at least, I’ve just two final places in South Africa to share with you. Until such time as I manage to get back out there again, of course!

Our last two days of hiking were spent surrounded by some of the richest plant life in the world, with both trails miraculously ending up within large, well-known gardens. I would say that of all the places we visited in South Africa, one of these hikes presented us with the prettiest scenes of all; the other, the most remarkable landscape of the Western Cape. In chronological order, we’ll start with the prettiest. Fernkloof.

Looking down on the town of Hermanus from Fernkloof

“There is no other place on earth where so many different species can be seen growing in such close proximity. In Fernkloof more than 1400 species have thus far been collected and identified.”

Schizaea pectinata fern, which we also saw in its younger, curled up form on Table Mountain

That is aside from cultivated gardens, this is thought to be the most biodiverse pocket of land in the world. For a horticulturist, probably worth a look, no?

It’s remarkably hard to give some context to the figure of 1,474 species in an area covering 18 square kilometres. No one seems to want to put a figure on the number of natives in the UK and even if they could, we have so little untouched land in which to study them. It seems that Western Australia, known for its biodiversity, has around 10,000 species, but then it covers an area of some 2.6 million square kilometres, so that’s not exactly the meaningful comparator. 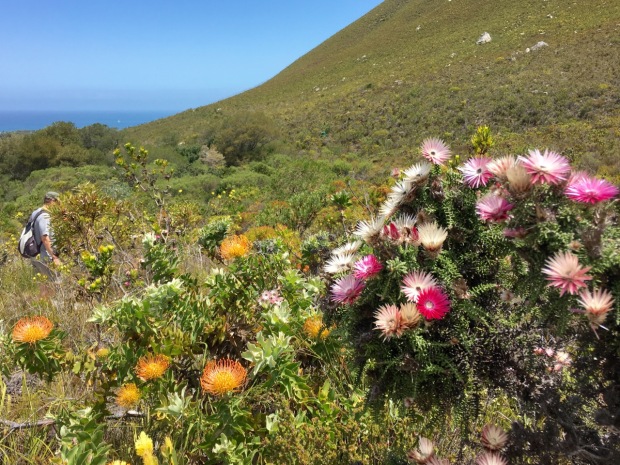 Pink Phaenocoma prolifera and orange Leucospermum are a dramatic combination

Instead, I’ll opt to show you what we saw, so you can decide for yourself if it looks an interesting enough place.

Wachendorfia paniculata, a cormous perennial endemic to the Cape

One of the reasons for its biodiversity is that it stretches from the coast–with its particular type of fynbos–through lagoons and evergreen forests–with quite different vegetation–to the mountains–different again–peaking at a towering 842 metres above sea level.

There’s a particular, straw-coloured grass which tends to pop up on disturbed ground, like at the side of a pathway. Any idea as to where the path might be here?!

But it’s not just for the diverse terrain that it earns its reputation. Each and every square foot of this nature reserve seems to be packed full of an incredible array of plants. There is so much variety, in colour, form and texture, yet nothing jars, all looks harmonious–and deeply captivating–jostling in the sea breeze together. It provides a great lesson in plant combinations: what looks right and how it grows together in symbiosis and balance.

Beautiful display of flowers picked that morning at the reserve

There’s a large group of volunteers that go out each week and pick samples of the species flowering at that particular time. We set off at 9am and already the ladies were back from their gathering, putting together a wonderful, labelled display of flowers to whet our appetite for the day ahead. 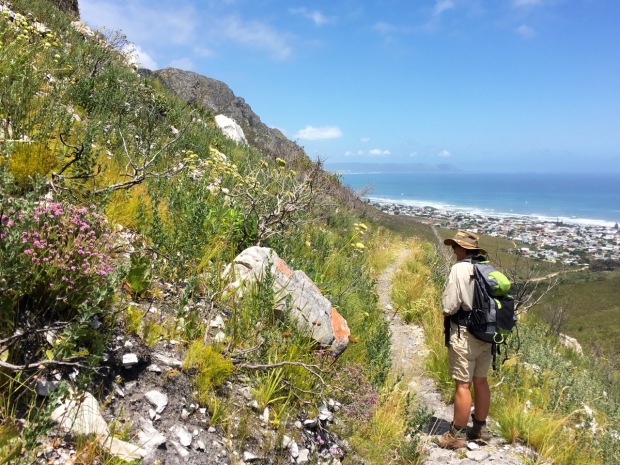 Our wonderful guide, Gilly Louw, finds all the very best places to take us!

Yet again, the backdrop of ocean and mountains add to the spectacle of the vegetation, but I also found myself examining many plants up close, in a way that I’m not always compelled to do. On every level, from a panoramic view of the horizon, to the intricate petals on a single flower, there was interest and beauty to be found. I loved exploring how the different plants were ‘arranged’, how they seemed to find their own little patch in the world. Apparently the odd tomato plant can even be found, way up in the mountains, evidence of the local tribe of baboons having come back from a foraging trip into town!

I adore the colours here; so fresh and coastal

The colours were of particular note. They somehow looked so right for their location. Very beachy and coastal. But there were also amazing forms of flower and foliage which were shown off to best effect as you caught a glimpse of their silhouette against the sky. 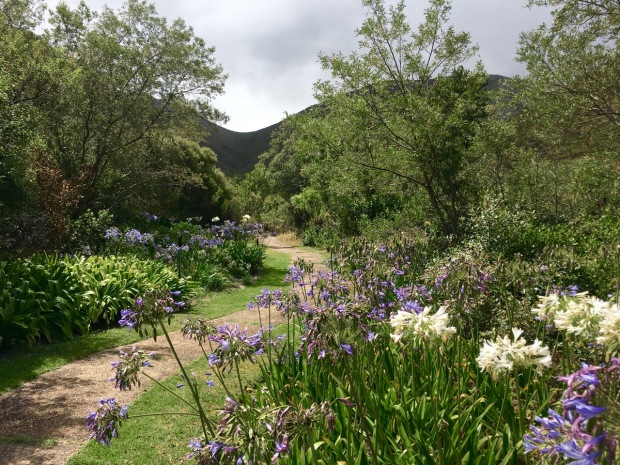 As we descended the Kleinrivier mountains, we made our way to the Fernkloof Gardens. These had been newly restored in 2006 and now include a fragrance garden, an extensive tree trail and ‘Walks on Wheels’ pathways for the less mobile local residents. It’s beautiful done, serenely peaceful and full of tortoises and birdlife animating the space.

Can a garden compare with nature’s design? Such contrast in this natural scene near White Rock, yet complete harmony: my definition of great ‘design’

But it was also here that both Paul and I finally realised, for sure, that a garden could never quite match the very best of nature. The garden was perfect for those unable to climb the mountains. It was perfect for those wanting an accessible place to spend their lunch hour. But no matter how talented the gardeners, it would never quite be the same as standing at ‘White Rock’, where we stopped for lunch, looking out over the natural reserve.

The shrubberies at Fernkloof Gardens are colourful throughout the year

Paul wondered if we had just spoilt our garden-visiting experiences forever, but I’m pleased to report that I’ve definitely not gone off them! I’ll share with you in my final post, how I squared this away as we left this magical, ultra-botanical region of the world.

Orange and blue at Fernkloof Gardens: a classic combination, sitting at opposite sides of the colour wheel