You wouldn’t call me a big city-person. I do like to see cities–admire their architecture, take in a bit of their culture and absorb a sense of them–but frankly, the faster I can do this and get out into greener pastures, the better.

And so given the opportunity to spend one of our Cape Town ‘city’ days in Table Mountain National Park, I leapt at the chance. Paul and I both love hiking and so walking up, as opposed to taking the Cableway, was an easy (at the time) decision. Having earnt our lunch, we thought we’d then descend by cable car, obviously purely in the interests of variety and keeping the tracks clear for other hikers.

Setting off to climb Table Mountain with our guide, Irene Vermeulen

We met our guide, Irene, bright and early at 7.30am and weren’t too upset to find the hike started in the Kirstenbosch garden. Despite spending a good four or five hours there the previous day, we found there were still vast areas we hadn’t even touched. Stopping–as I occasionally do–to take the odd photo, I was quite blasé about the climb ahead of us.

A family of Egyptian geese on the path at Kirstenbosch

I wasn’t too worried about being slowed down by large families of geese crossing the path or by a single-minded determination–if not success–to jump, skip, hop and wait out the vast, rotating, early morning sprinklers and avoid getting wet. We were seasoned hikers, we had a guide looking after us and life was full of wonder.

Tall and healthy Leucospermum shrubs on our Table Mountain climb

One of these wonders was trying to figure out where the garden finished and the natural wilderness began. Every time I thought we’d passed the last planted specimen, I found another that I couldn’t quite believe hadn’t been placed there by man. 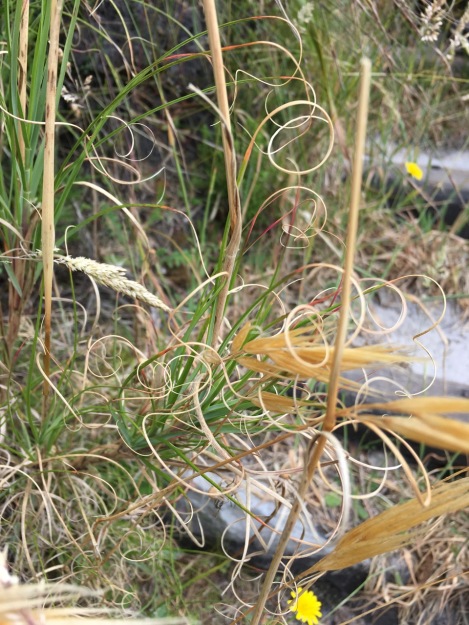 Everywhere you look, something incredible jumps out at you. It was almost impossible to comprehend. The most confusing thing of all was that this was low season for plants. It was the hot, dry summer–the period of dormancy in arid regions–not vibrant spring, mild winter or damp autumn. What on earth would it be like then? 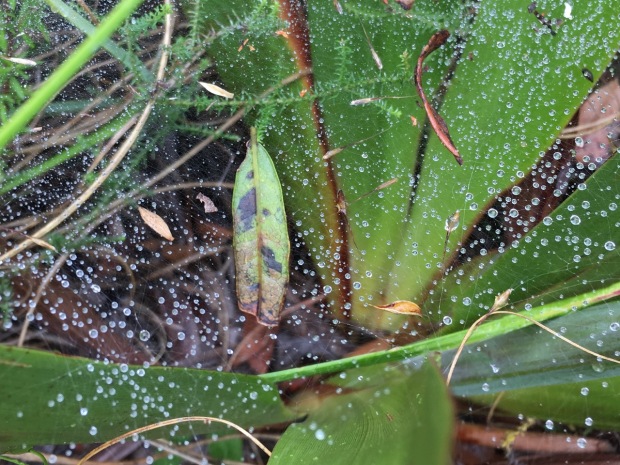 There had been no rain on Table Mountain, but drops of dew from the cloud, caught in a spider’s web, help to make sense of plant survival in such a hot, dry location

Having Irene by our side was wonderful. I learnt so much more and it was a real treat to not have to think about navigation or potential hazards. All I had to do was safely put one foot in front of the other and enjoy the ride.

Nursery Ravine, way up Table Mountain was the site of a tree nursery from 1893 to 1910. Oaks were grown for wine barrels, but in the heat they lacked winter dormancy, meaning the grain was insufficiently tight

Although, there was perhaps one disadvantage of being guided. I’m not sure I had quite realised that Table Mountain was 1,085 metres high. That’s over three and a half Eiffel Towers. And I’d perhaps forgotten just how flat Hyde Park–my only walking trail for the past ten months–was. And maybe I hadn’t done all that much research into just how often the Cableway had to be closed to high winds. 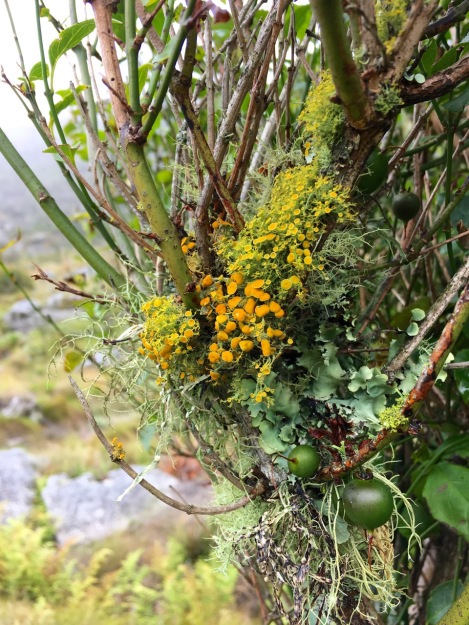 The lichen on this tree fuschia was magnificent!

I was blissfully unaware of what loomed ahead of us, as I stopped and I photographed, looked back at the view and thought how lovely this beautiful country we had just landed in was. How pleasant all these gentle walks were going to be.

I didn’t manage to identify this plant with gorgeous curled up tips. If anybody knows, I’d love to be enlightened!

I was lost in a daze of wildflowers and fynbos, taking everything in and hungrily learning as much as I could. I learnt that Fynbos is characterized by the presence of three plant groups:

Restios and sedges generally form the greatest proportion of fynbos cover, taking the place of grasses on nutrient-poor soils, especially in areas of high winter rainfall and strong winds. They have reduced or absent leaves and tough, wiry stems and I instantly recognised them for their distinctive colouring: in most cases, bright green stems contrasting with dark brown bracts. They provide the vertical definition to fynbos and indeed the material for the many thatched roofs we saw in the Cape.

Erica plukenetti growing in a gap between rocks on Table Mountain

The ericas make up by far the largest number of species in fynbos and the locals delighted in telling me that over 80% of Erica worldwide are from South Africa, way surpassing the number of British heathers. We looked at them under a microscope and it was fascinating to see their small, narrow, rolled leaves, clearly perfectly adapted for this hot, dry climate. I’ve never got overly excited about heathers before, but the range, colour and sheer quantity of them on Table Mountain was enough to get even the biggest Ericaphobe on the rethink. 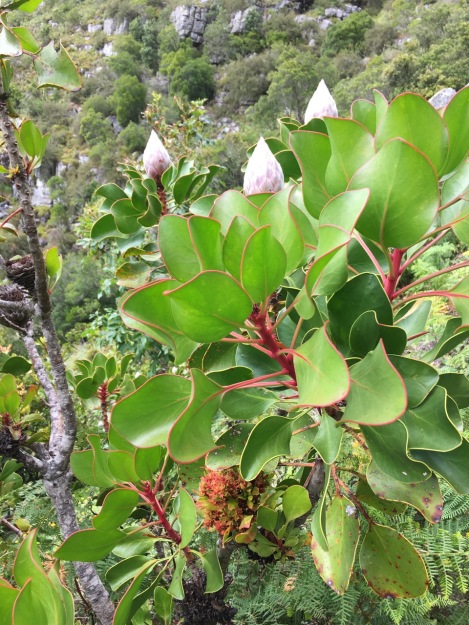 Protea cynaroides (King protea) is the national flower of South Africa. You can also see ‘witch’s broom’ bottom centre, which is distorted growth caused by a bacterial pathogen

Finally, we get to the proteas: probably the family that I most associate with South Africa, despite this being the least common of the three fynbos groups. Proteas provide gravitas to the landscape, with large, broad leaves, the showiest flowers imaginable and invariably the greatest height. South Africans are most upset that when it comes to the Protea family, Australia beats South Africa hands down, with a far greater range of species. I advised them to just keep quiet about this, feeling quite confident most Australians would be none the wiser if they didn’t keep bringing it up!

These stunning red colours were described to us as ‘stone roses’; I’m guessing some kind of lichen

Whilst these are the only three plant groups that must be present for vegetation to be defined as fynbos, there is another group of plants that are very often seen. Fynbos–as much of the Australian bush–regenerates well after fire, with many species adapted to get ahead of the competition under these conditions. Where bare soil is exposed and light maximised, one of the first plant groups to appear are the geophytes.

An Ornithogalum, I believe O. thyrsoides: so exciting to find, having grown these in my Canberra garden

Simply put, geophytes are plants with an underground food storage organ. Most of us (either lazily or ignorantly) call them bulbs, but strictly speaking there are also tubers, corms and rhizomes which are quite different in form. We didn’t see any areas of recent fire on Table Mountain, although we were lucky enough to see spectacular after-effects of fire at Helderberg, later on in our trip. We did, however, still see plenty of geophytes on the mountain.

After much oohing, ahhing, stopping and photographing we eventually arrived at the top of the mountain, me feeling pretty pleased with myself at completing such a strenuous climb on the first full day of our holiday. 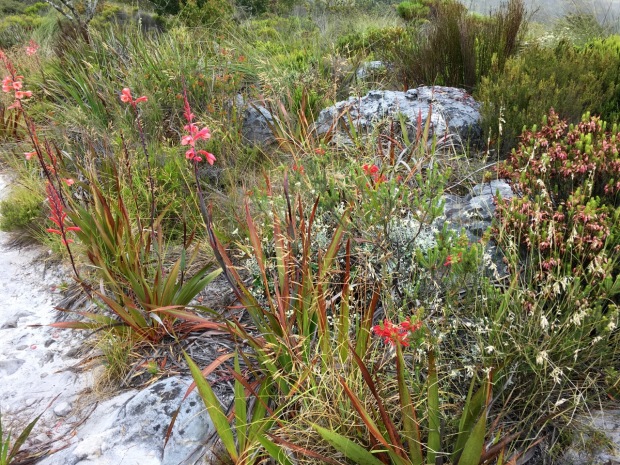 …but when you look up close there is so much more than Watsonia; so many plants and flowers all packed into the same piece of ground

It turns out, however, there’s a lot more to see on top of ‘table’ mountains, compared with your average, ‘peaky’ mountain and our walk had only just begun. 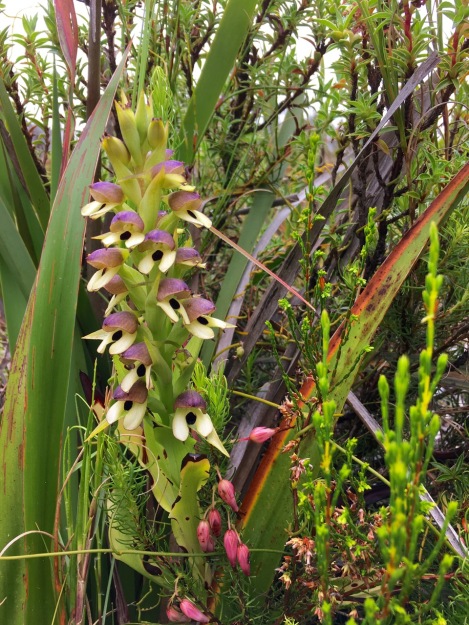 Every time you bend down you’d find something amazing, like this Disa cornuta, an indigenous orchid that I almost trod on

We went on a very successful Disa (a type of orchid) hunt, we walked along the wall of the enormous Haly-Hutchinson reservoir, a feat of engineering which is hard to comprehend in its location, and we stopped by a stream of noisy frogs for our lunch. It was just perfect.

The water on Table Mountain is brown with tannins from the fynbos, but pure enough to drink

That is, it was just perfect until we discovered the cable car was cancelled for the day. We had a very big descent, on foot, ahead of us.

I shouldn’t complain. It was wonderful being outside, in fresh air, with beautiful surroundings, but it wasn’t quite what I had in mind for our first day. I’m not a confident descender and about five minutes in my legs had turned to jelly, as I gripped the uneven ground somewhat over-zealously.

I adored the colour of this Erica (E. cerinthoides?)

Perhaps the fact that we chose a different track for our descent didn’t help. Despite being assured that Skeleton Gorge wasn’t named after a long list of long-lost hikers, the dry creek bed–which felt more like a dry waterfall bed–did have me wondering. I’ve since learnt that more people have come to their fate hiking Table Mountain than Mount Everest. 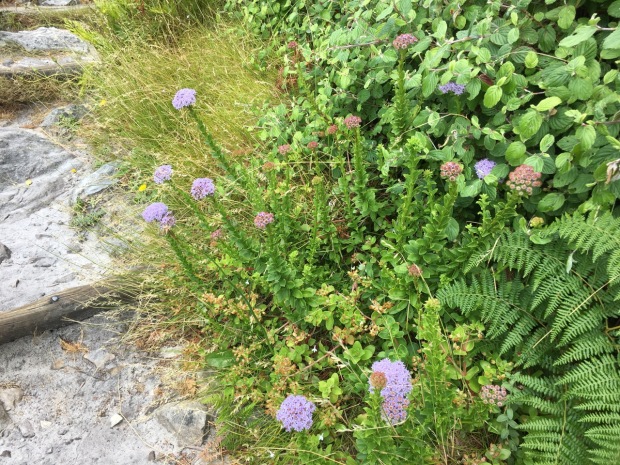 Selago serrata seems to start a dusky pink and open out to mauve: the combination of both colours on one plant is a real delight! You can see some tiny white Lobelia here, too

The good news is, we did survive to tell the tale, despite the somewhat sore legs for several days in my case. I have rather a lack of photographs of the descent, as I concentrated on my footing with all my might. But our Table Mountain hike was a very special experience of a very special landscape and I’m super glad we did it.

Perhaps blissful ignorance and a lack of research may take me to further destinations that might otherwise be put into the ‘too difficult’ pile.  On this occasion it certainly helped me see things I wouldn’t have missed for the world; it’s a strategy I might just employ some more!

Leucadendrons on the Table Mountain climb