If you were to walk around Cadogan Place Gardens on a sunny Saturday in June, I’m quite sure you’d think it a very pleasant way to pass an afternoon. Whether you were wowed by the most healthy looking roses you’d ever seen, the sumptuous herbaceous borders, the Union Jack-coloured meadow or the green, green shady woodland, amongst an enormous three hectares of immaculate planting, something’s going to ‘get’ you!

But within this garden, even more than the planting, it’s the history that really took my breath away. My fourteen-year-old self, dropping the subject at the first possible moment, would be quite discombobulated by this fact. But oh, that history teacher was something else. If only Mrs Bannister had taught me history as well as maths.

Shady foxgloves and Hydrangea at Cadogan Place South: so lush and abundant

Cadogan Place –North and South Gardens–is listed on the Historic England register and with very good reason: it’s hard to imagine a set of plants that could have more extensive links to our past.

Mixed planting along the boundary of Cadogan Place North Garden

Despite being just one kilometre west of Victoria Station, the area was no more than a set of fields and market gardens until 1777. But after the Great Fire of London, wealthy Londoners had not wanted to return to the crowded medieval City and so new estates were built in the ‘countryside’ to the west, offering a healthier way of life for this new commuter group. And so garden squares began.

Wollemi pine at Cadogan Place South: the old houses with the clearly more newly planted Australian pine (a species which dates back some 65 million years, yet was only discovered in 1994)

No less than Mr Humphry Repton was brought in by Earl Cadogan to design the North garden, with extensive excavations undertaken to create hollows and hillocks between gently winding paths. 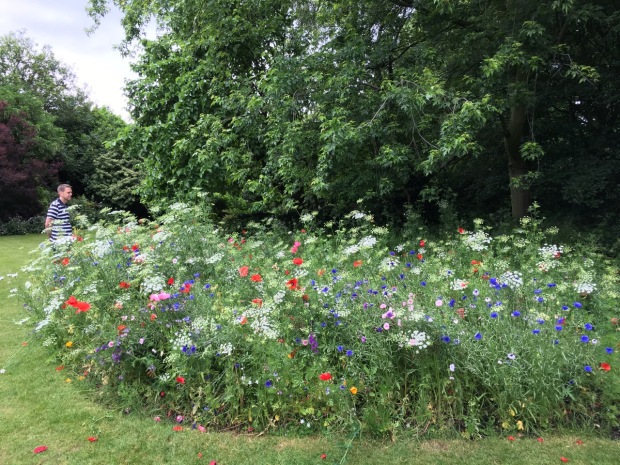 Meadow-style planting at Cadogan Place South Garden: the colours had high impact but I think a few more pink and orange poppies might have happily toned down the contrast

Meanwhile, the South garden was developed as the ‘London Botanic Garden’ by William Salisbury, who held botanical classes in the late eighteen century in the library, hothouse, greenhouse and conservatory buildings on site. Subscribers to the garden, all of whom lived within a mile of the site, were also treated to summer evening concerts. 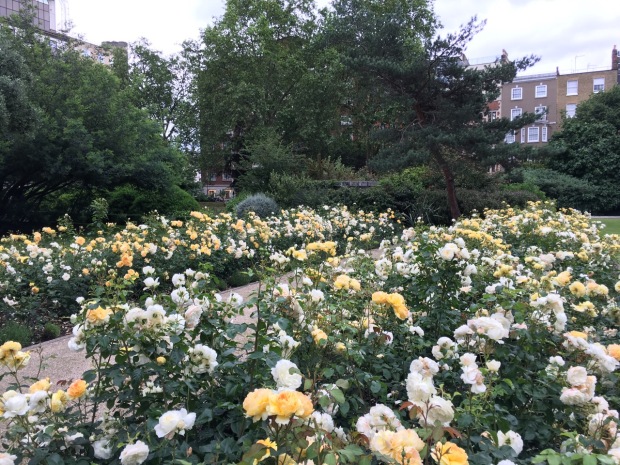 Roses at Cadogan Place North Garden: I adored the dual-tone off-white and yellow, resulting in both depth and cohesion. It was hard to take your eyes off them

The North garden continued pretty much as was right up until World War II when all traces of Repton’s design were lost. First, the railings surrounding the garden were donated to the war effort and a barrage balloon secured to the site. In 1942 the balloon was decommissioned, to be replaced by a military camp with tanks dug into the ground and anti-aircraft gun stations.

A gorgeously full herbaceous border at Cadogan Place South; looking somewhat more serene than it might have done in the first half of the 1940s

Happily, a few of the perimeter trees survived the war, but, not so happily, many later succumbed to Dutch elm disease in the 1970s. At this point, the opportunity to construct an underground car park was taken; it is very hard to believe that today much of the space is purely roof garden, existing on 100 centimetres of soil.

Meanwhile, the South garden had become a public promenade by 1820, but was redeveloped as private gardens in the late nineteenth century, as part of wider development in the area, which had become quite run down. Tennis courts replaced the old Botanic Garden glasshouses and new houses were built around the perimeter. The South garden escaped the war relatively unscathed, but those pesky Dutch elm beetles weren’t so generous and much replanting was carried out after the 1970s. 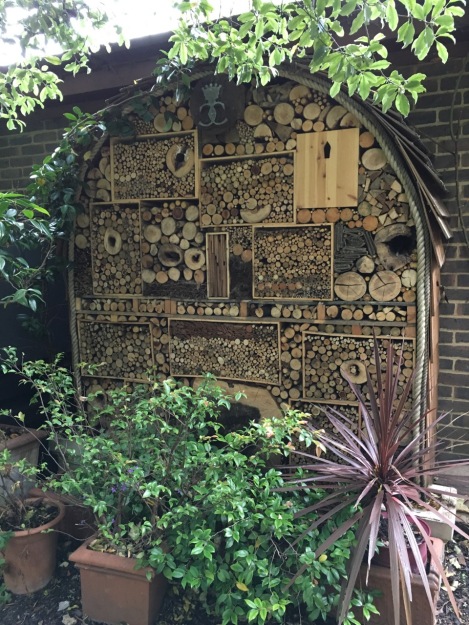 Mini beast hotel at Cadogan Place South Garden: one of the best I’ve ever seen

Charles Dickens once described Cadogan Place as “the connecting link between the aristocratic pavements of Belgrave Square and the barbarism of Chelsea”. I suppose he talks of the time just before his death, when the area became run down.

If a new-build, brick block of toilets on a dull, dull day can look attractive, we should not let anything defeat us!

The Cadogan family still own large swathes of the very upmarket Chelsea today and are second only to the Duke of Westminster, the richest landowner in Britain. The Cadogans descend from Major William Cadogan, a cavalry officer in Oliver Cromwell’s army, but in fact their wealth predominantly came through marriage, when the second Earl of Cadogan married Elizabeth, daughter and heiress of Sir Hans Sloane, lord of the manor of Chelsea. 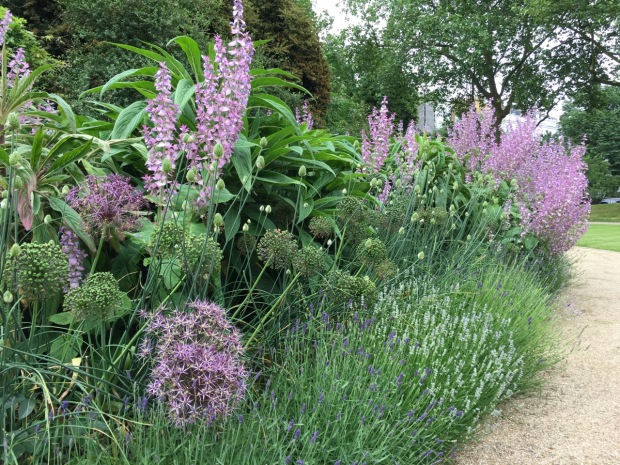 Sir Hans Sloane was a botanist, physician and philanthropist, who contributed much to natural science and whose legacies include the British Museum, Natural History Museum and the wonderful Chelsea Physic Garden.

At the centre of the South garden stands the Hans Sloane Garden, which was displayed at the Chelsea Flower Show in 2005

However, there is some irony in the fact that much of the Sloane’s (and hence Cadogan’s) wealth came from slave-worked Jamaican sugar plantations, as later on, William Wilberforce resided at number 44 Cadogan Place. It was here that he learnt, just three days before his death in 1833, that a bill had been passed to abolish slavery in the UK once and for all, the culmination of his life’s work.

Number 52 Cadogan Place was also the birthplace, childhood and family home of Harold Macmillan, the UK’s Prime Minister from 1957–1963. And at number 30 lived Dorothy Jordan, who bore some ten children as the mistress to King William IV, and with a further five children in tow it’s hard to imagine how she ever had time to establish fame as a highly successful comedy actress.

It’s certainly been all go at Cadogan Place Gardens over the years. It’s fascinating to think how much has gone on within and around this one garden. But with an estimated population of around six million in eighteenth century England and limited practicalities for travel, I guess everything was a little more interconnected back then.

I have yet to become a real city person, but if I can sit underneath an ancient mulberry tree–rumoured, if unlikely, to have been planted by Charles II 300 years ago–learning about London’s history, there is just a small chance of me catching the city bug yet!

An original Red Book of Humphry Repton’s from the late 1700s: I was beyond excited to see this at the Royal Horticultural Society’s Lindley Library a few weeks ago