As I squeezed into the lift to the sixth floor, elbow to elbow with other visitors, I wasn’t overly excited about this one. I’d seen photos of the gimmicky flamingos and palm trees in this popular corporate events venue and the appeal of a local community coming together around a square of ancient plane trees and newly planted perennials was somewhat lacking. But having walked past the building many times over the last few months, there was something urging me on.

The first glimpse of the Kensington Roof Gardens: The Spanish Garden

Coming out of the lift, it looked exactly as I’d imagined: a pretty garden, particularly appreciated for its unlikely location, but the design was not going to set the world on fire. It was interesting to see the exotics that happily grow in a walled, London microclimate, but the whole Spanish flamingo thing didn’t seem entirely with taste in such an abstract location.

Taking photos through the busy crowds was tricky and slow and I turned towards the lift, not wanting to waste precious time when there were 200 beautiful garden squares to be seen. But the crowds saved me, as trying to inch my way back to the door I heard a lady say to her friend, “there are three gardens up here, you know, not just the Spanish Garden”. Aha! 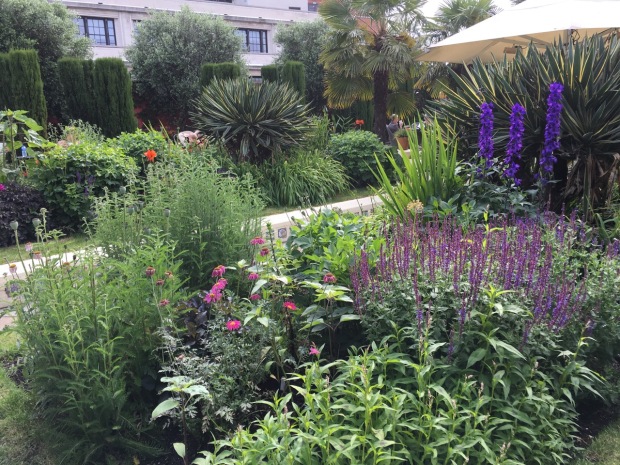 As I had previously read – but clearly instantly forgotten – the gardens were designed by landscape architect, Ralph Hancock, after the then owner, Trevor Bowen, visited the Gardens of the Nations at the New York Rockefeller Center and wanted some of the same. The three gardens comprising ‘The Roof Gardens’ opened in 1938 and incredibly, not much has changed since then, with several of the original trees still standing, in their meagre 45 centimetres of soil. Today, they have Tree Preservation Orders and the garden as a whole, a Grade II heritage listing. 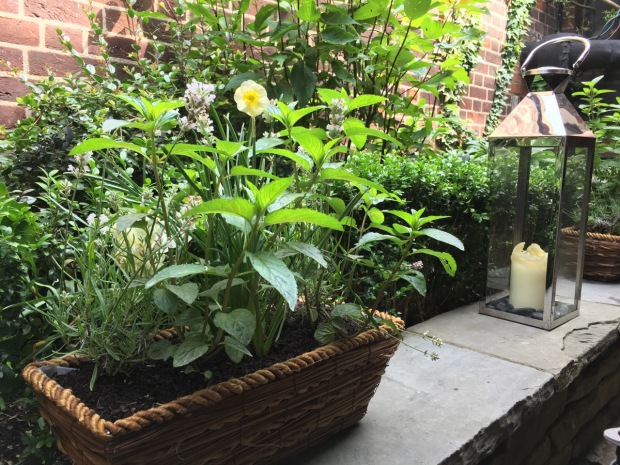 In the corner of the Spanish Garden a pathway led to the Tudor Garden, complete with red brick walls and mock Tudor arches. There were a number of lovely details but I think its appeal would be shown off best laid out with white table-clothed and floriferous table settings, as their brochure demonstrates. It was mostly large, bare expanses of grey flagstones and not-particularly-thriving shady beds.

It can’t possibly be real…but it is!

But then I turned the corner into the English Woodland Garden, and all was forgiven. My first sight, two pink flamingos, sifting through silt on the bottom of the woodland pond: I was hooked! All my prejudices went out of the window and I stood, staring at them in bewilderment. It was such an amazing sight. The flamingos seemed pretty happy with their lot in life and indeed two of them are over 30 years old.

The Queen’s Tower, viewed through a window in the roof garden wall, shows the true bizarreness of flamingos, 30 metres up in the air, in central London

And whilst their surroundings are hardly the Bahamas, for whom they are the national bird, I could quite see how happy they could be. For by far the largest chunk of the Roof Gardens was dedicated to a rustic English woodland theme. It has to be said that Mr Hancock certainly had some vision for this space.

Mature oak trees dominate the skyline, between which, glimpses of the Houses of Parliament, Royal Albert Hall and the London Eye can be seen through decorative windows punched through the boundary wall. It is genuinely like walking along a narrow lane in rural England, only the odd flamingo stopping you in your tracks and bringing you back to reality, in the most ironic of ways. There are ducks too and even a life size cow, although they did stop short of grazing livestock on the lawns.

The rusticity of the Woodland Garden makes it hard to believe you’re not in rural England…until a flamingo walks past.

I think it is the vision and ambition that really got me. The setting out to do something quite unthinkable and achieving it wholeheartedly. When you think back to the 1930s, fashion was quite different, with Spanish themes and carpet bedding much more in keeping with the time. It must have been an incredible spectacle in a decade that we associate with the Great Depression and the start of World War II. Visitors were charged a shilling for entry back then, so whilst it may not have been accessible to all, the gardens raised over £120,000 for local charities. 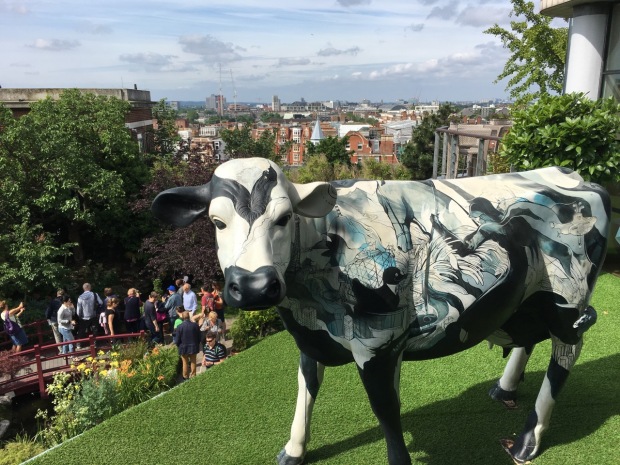 And so I liked the history and the ambition. I also liked the fun and moderate outrageousness of it. Just the doing something different. And speaking to one of the gardeners was a sure fire way to have me convinced. I told him how incredible I thought it was and he replied, “I know, I still can’t believe it myself”, in a humbled way that told me he adored his job and couldn’t believe his luck at working there. 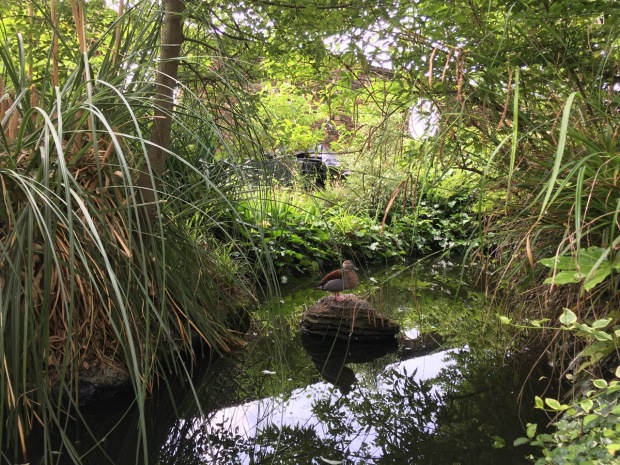 It was a lesson for me to remain open minded. An important role for all gardens is to inspire, to lift, to re-energise their visitors. Beauty, so closely tied to nature and plants, is the classic means for achieving this, but there are many other ways to deliver the same result. 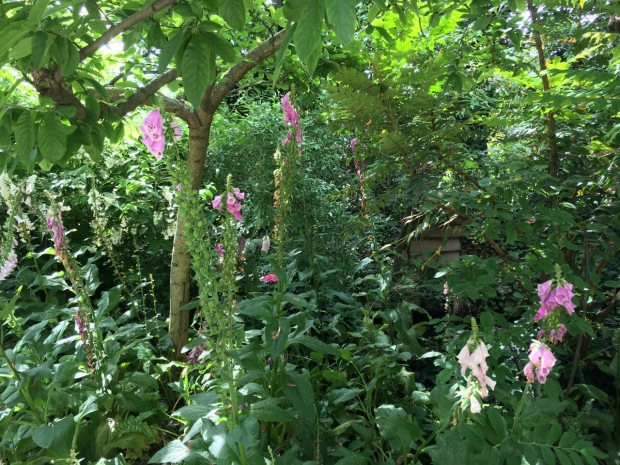 This may be a corporate garden, run for the purposes of driving shareholder value, but it still has a history and its own personal stories behind it. Personal stories that make a garden a garden. That bring uplifting qualities to its visitors.

Whilst reducing the depth of the raised bed, the lawn edging brought a ‘proper garden’ feel to the terrace, making it seem much bigger; quite a clever trick

Sometimes we just need to look a little harder; to find inspiration from a broader range of ideas. Hard work, a big vision, creativity, the application of love or indeed, a beautiful end result can all lift us and leave us feeling refreshed and reinvigorated. The more we look, the more we gain.

Keep looking, one and all! 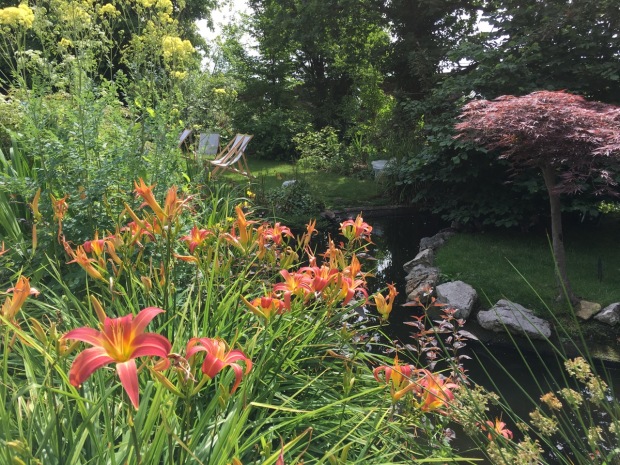 Deckchairs by the stream in the Woodland Garden. G&T anyone?