I feel extraordinarily lucky to live in the beautiful Sydney suburb of Mosman. We have, by my admittedly not very scientific calculations, around 15 kilometres of harbour frontage, six idyllic sandy beaches, 29 parks and reserves as well as incredible views of the heads, opera house and harbour bridge. And all this, just four kilometres by ferry from the city.

The only snag is, everyone else wants to live here too. 27,000 of us in fact. Which means property sizes are, on the whole, small and unless you are lucky (or house hunt by garden, rather than bricks and mortar, as some of us do) it’s pretty hard to create a proper oasis here. You know, a secluded, green, peaceful sanctuary where you forget about everything else in the world.

The wetlands are host to a whole ecosystem of flora and fauna; interwoven to create the most natural scene

Even if you do have privacy and more than a couple of metres between the house and fence line, you soon discover the perils of our terribly thin, shallow, sandy soil. All the theories I had learnt of infrequent, deep watering very quickly went out of the window, along with most of the plants I had brought from my clay soiled garden in the much drier Canberra. 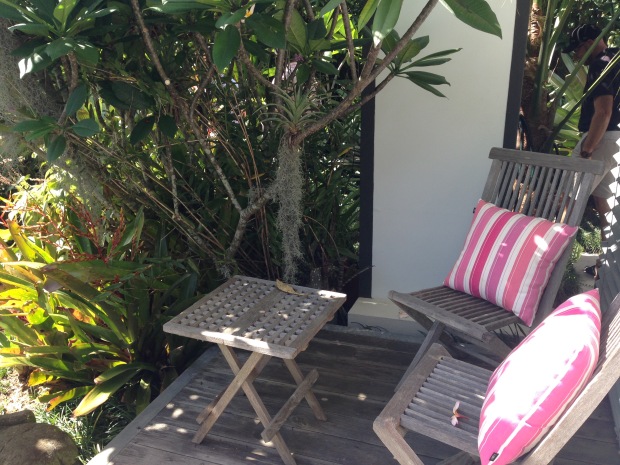 One of a number of cosy nooks in Mark’s garden

Fortunately, there’s always one clever soul who shows us just how it to do it. And in Mosman, that man is Mark Paul. Boy, does he do gardens well.

As unassuming and humble as they come (I was going to warm to him instantly), Mark understands his environment as if it were a part of him. His thirty years in the landscaping industry, running ‘The Greenwall Company’, has clearly taught him a thing or two, but Mark’s passion, for plants and for the environment, are really something else. This is a man so in tune with his surroundings you feel he must have some kind of sixth sense.

So it might surprise you that he bought a house on a site with a sandstone base and exactly zero millimetres of soil. Can you imagine? But, hey,  this was no barrier for Mark. He built six very large planters , created green walls and green roofs, built up an average 20 centimetre soil depth where he wanted plantings and then picked exactly the right plants.

Who would have thought you could grow bananas on such a dry site?

And so despite it being a fairly average 750 square metre plot, Mark has developed an oasis to match the very best country estate. He’s got vegetable gardens, chickens, fish and tadpoles, alongside the most stunning, perfect, sophisticated seating areas. He’s got play areas for his children, utility areas for composting, wetlands, drylands, a swimming pool and everything in between.

How does he do it?

There are plants growing from every surface: here above the chicken coup, which looks like a recycled phone box

Well, through two broad mechanisms. The first is through taking an holistic viewpoint. Every aspect of the house and garden seems to interact with every other aspect. The trampoline provides shady cover for the chicken run; the roof collects water for the roof plants, green wall, to top up the pond and then be stored under the house; prunings are all mulched on site and used to keep moisture in the soil; chickens eat kitchen waste; carp eat mosquito larvae; water plants are cut back to balance nutrients in the system; and piping under the house preserve the natural flow of water over the block.

Space for the chickens to run under the kids trampoline

Everything is considered and balanced in a way that allows an equilibrium to form. Ecodesign is all very well but can seem like an expensive, inconvenient or high maintenance way of living. When it’s done well, it’s exactly the opposite. I find the idea of natural cycling of materials within an urban property enormously exciting. Each Wednesday morning our road is full of overflowing, huge, 240 litre bins of rubbish. Each household filling two or three every week. It’s obscene when you think about it. How can we be buying so much that we throw away 500 litres of rubbish every week?

Some of the 240 species that adorn the roof of Mark’s house. I really needed a pair of wings to take in the rest of it!

I was a very late adopter of recycling; it was 2006 before I did any at all. But I’ve always hated inefficiency and wastage and now sustainable ways of living, that are both sustainable for the environment and sustainable as a realistic, day to day, way of living, feel so right to me. These closed loop systems so clever and neat.

Epiphytes fill the trees in Mark’s garden, adding layers of texture and colour

But before I start tying myself to trees, I’ll finish the story. There was a second mechanism I mentioned. And that’s the one of picking the right plants. Mark has learnt which plants actually thrive in shallow, fast draining soil and built the garden around them. He has exotics and natives, trees and ground covers; names and nationalities are no problem, it’s how they grow that he is concerned with. And, incredibly, he has found 240 species that thrive on that very hot green roof alone.

I wrote a post a while back on my frustration with green walls being marketed as a quick and easy way for non-gardening types to soften apartment balconies and the like. Well, Mark Paul has totally won me around to green walls. You do need specialist skills and equipment to set one up that will endure, I still despair of the online marketing, but with the knowledge that Mark has, they can be both stunning and sustainable.

I’d naturally pick a low growing, soft, able-to-be-trampled-on-a-little plant to fill in between two paths, but how great do these Bromeliads look?

Mark’s company motto is ‘Reclaiming the built environment’. He shows us the way to reclaim an oasis in the smallest of city spaces. He really is pure genius.

The unobtrusive swimming pool nestles amongst lush plantings beneath the terrace, giving a soft, natural look, far from the aesthetics of most pools