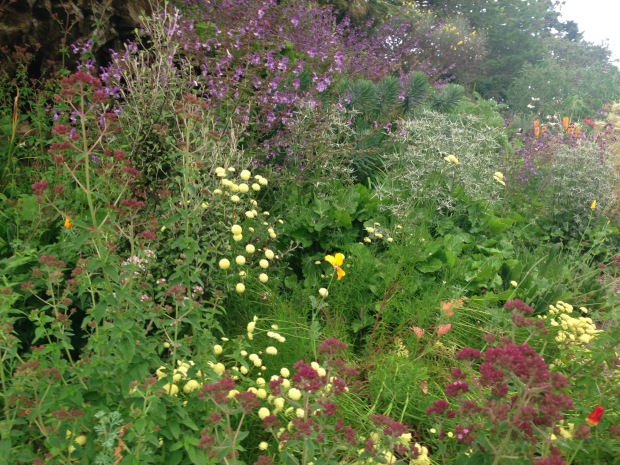 I don’t think I’ve ever thought of a garden as ‘painterly’ before. Often words come into my head as I walk around gardens and I later look them up to see if they really are the most appropriate. The definition I found for ‘painterly’ was:

characterised by qualities of color, stroke, or texture. 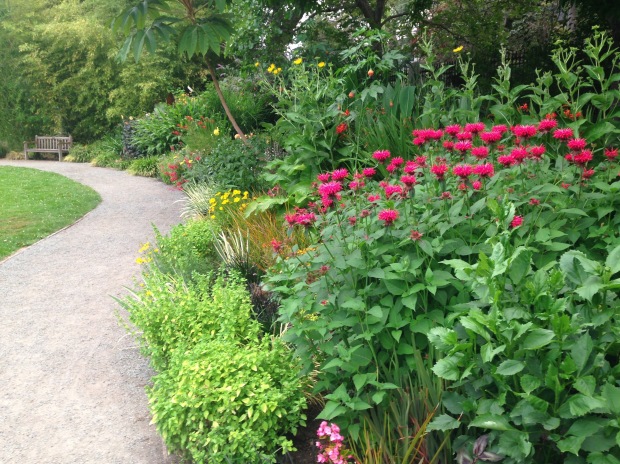 Yes, painterly definitely describes how it felt as I wandered through the gardens of Government House in British Columbia. 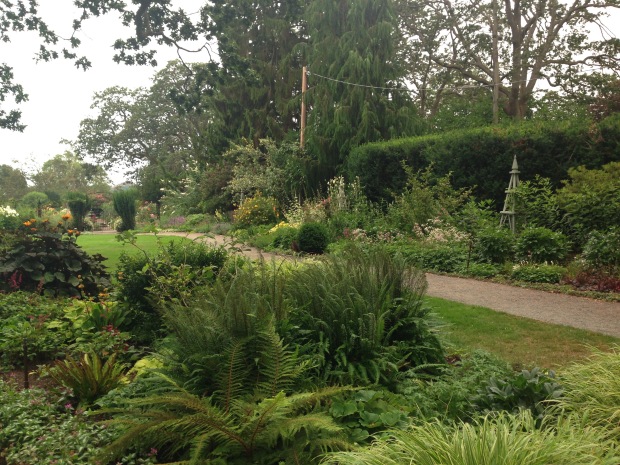 The garden brought to life all that I had read about the talented Gertrude Jekyll, one of the best known garden designers of the twentieth century. In Judith Tankard’s ‘Gertrude Jekyll and the Country House Garden’, she surmises that Jekyll, an artist herself, was perhaps inspired by JMW Turner’s paintings in selecting the colour schemes for her borders. 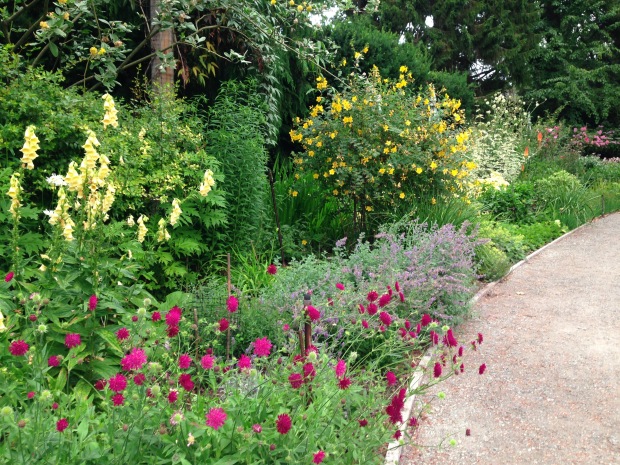 Soft, sweeping pathways bring an informal feel to the gardens

And taking in the borders of Government House, I could just imagine an artist, standing back from the garden bed, saying, ‘yes, just a touch of ripe apricot needs to be added just here. It will lift these damson shades tremendously’. 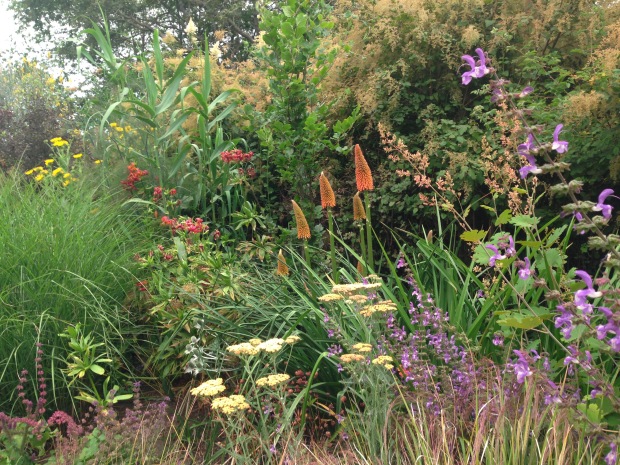 The colours were truly tremendous. Possibly the best I have ever seen. I have seen plenty of stunning colour combinations in my time, but none quite so skilled. We all know that hot colours work well as a combination and I’ve seen an amazing example of this in the Cottage Garden at Sissinghurst. 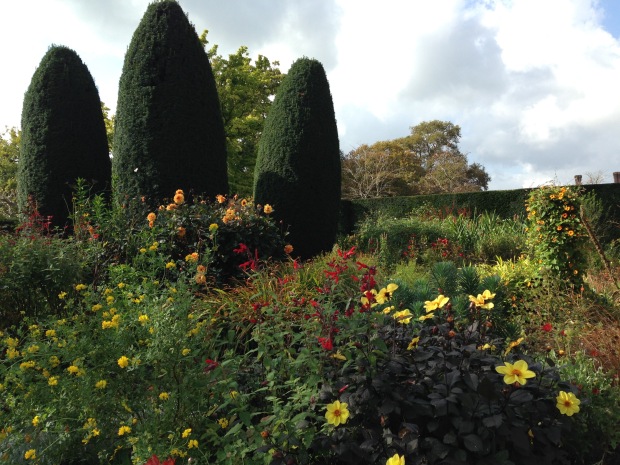 We know that soft, pastel shades look fantastic together and I’ve seen great examples of this in rural New South Wales. And the white garden is another classic, again the most famous example being at Sissinghurst. 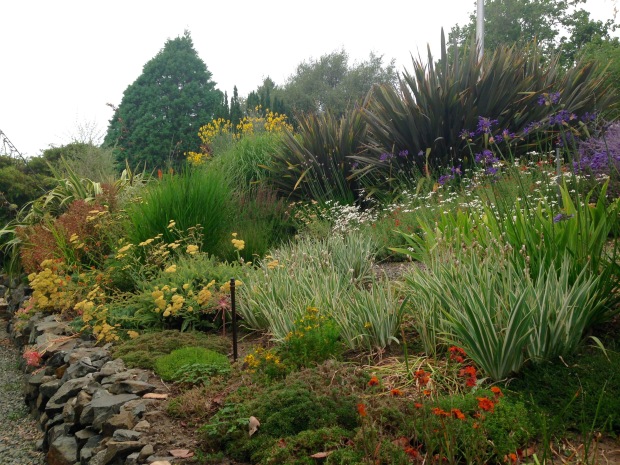 And it’s true that it’s harder than you first think to get these classic colour schemes to sing. I always think back to the first blue and white border I created and the terrible pinky purply blues that jarred as their first flowers opened. 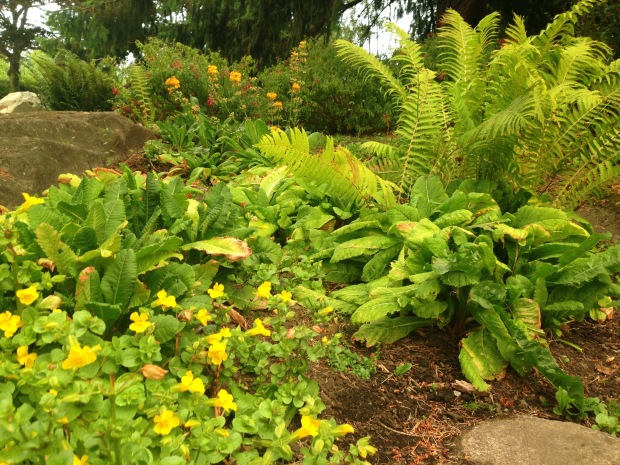 But the gardeners at Government House had not just perfectly ‘nailed’ a tried and tested colour scheme. They had invented their own scheme. One that you will not find in any garden design book. One so complex that it’s almost impossible to write down in words. One that can only be developed through the intuition of a true artist. One that can be appreciated by many, but created by only a very select few. 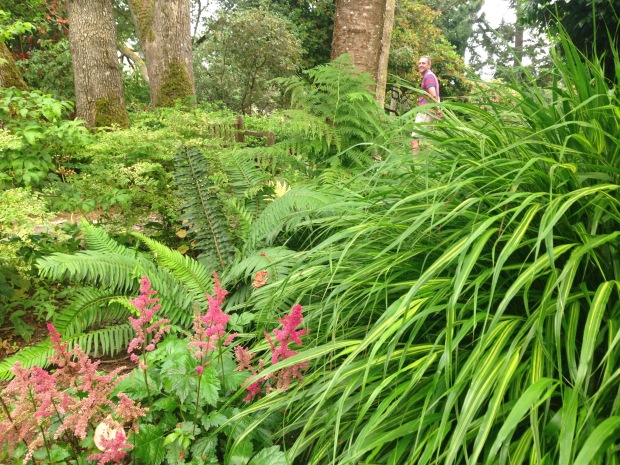 I dream of having a garden where I can plant it up, see it fill out and then play at adding my ripe apricot behind the damson blue. I’m certainly not a painter (although I do dream of learning), but I like to think my appreciation of colour is relatively developed these days . It’s so rare that I get the opportunity to stand back and paint though. I can ‘paint’ with plants in the nursery, but it’s just not the same. I want to see everything laid out in place, wait for it to intermingle and mature and then stand back and add my finishing touches. 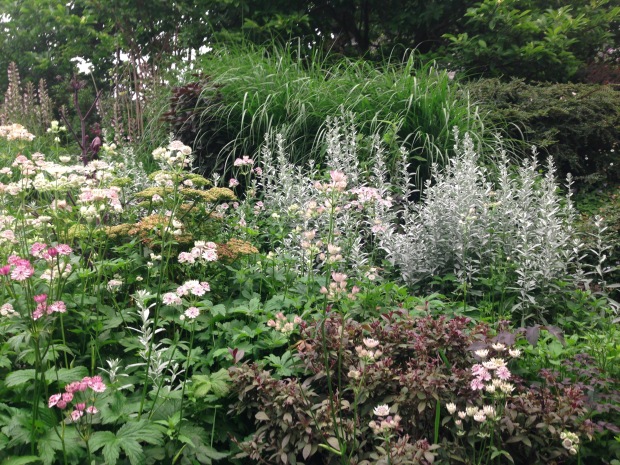 And whilst the anticipation of a developing garden is so much of the thrill of gardening for me, having moved house (and city) four times in the last decade I’ve never had that long term relationship with a garden. I’m always in the base colours phase of the painting, getting the structural elements in place and defining the overall concept. I only ever get to the tweaking and refining and moving from just ‘beautiful’ to (close to) the ‘perfection’ stage in the occasional client’s garden. 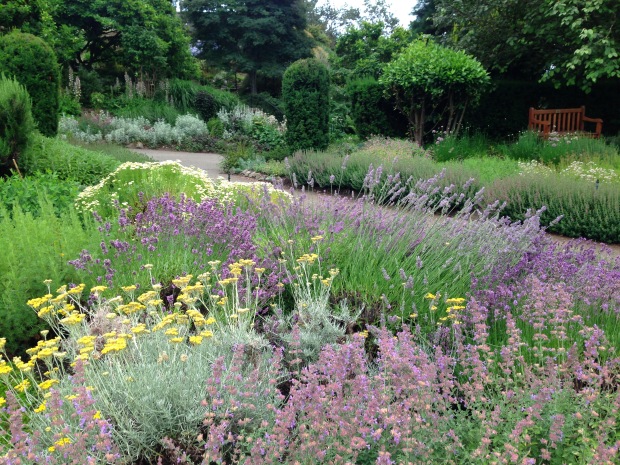 Pastel yellows and mauves in the herb garden at Governmnent House

I used to believe that a good garden designer ‘should’ get perfection first time around. But now I see that it takes time. The very best gardens have to evolve. And one day I will get past the ‘need’ to plant every species that will grow in my new climate and garden and focus more on perfection than on experimentation. 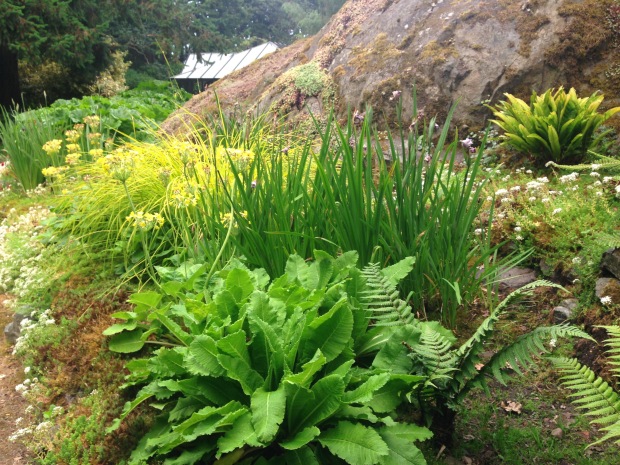 This garden wasn’t just about highly skilled combinations of colours though. It had a huge mix of styles and of plant types. There were areas where flowers dominated and areas all about foliage; there were formal rose gardens and informal rockeries; there were bog gardens and Mediterranean gardens. There were even Australian Callistemon, or should I say Melaleuca (watch for a name change on its way)? 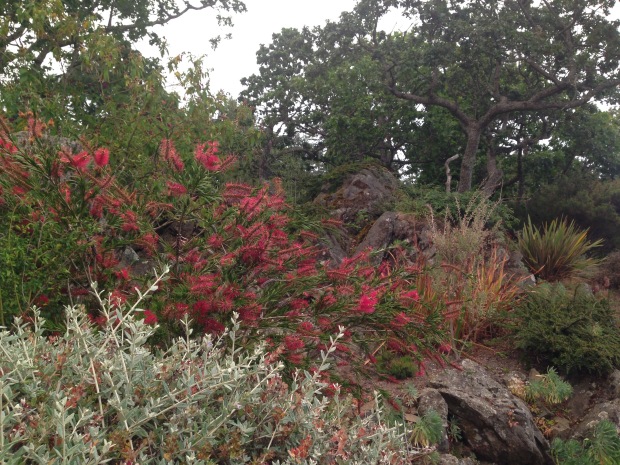 But all these plant and garden types worked perfectly together, forming a unified whole, as all great gardens do. The really impressive thing that I found out afterwards, is that these gardens are maintained primarily by volunteers. It would be an extraordinary place to garden–I can quite imagine having plenty of willing volunteers–but what is surprising is that with so many hands, it all comes together so perfectly. 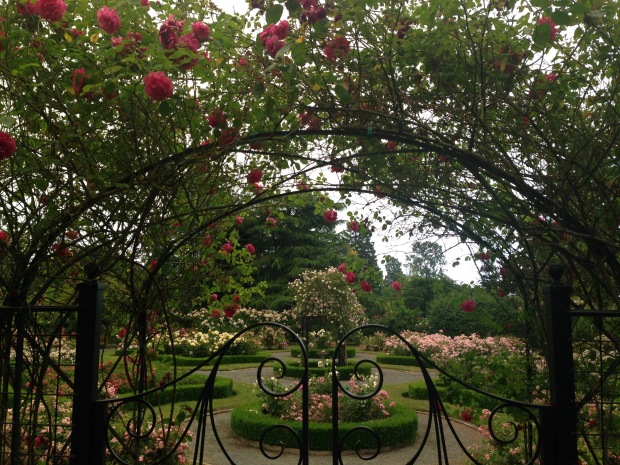 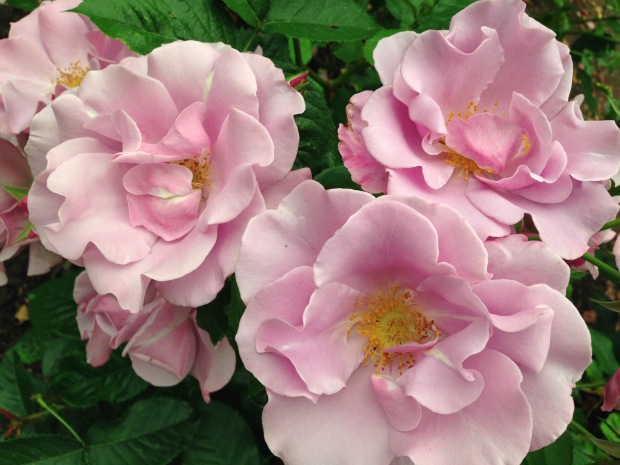 Such texture to these roses at Government House

I’d love to meet the Head Gardener of Government House. I see him (or her) with a paintbrush in their hand, directing the volunteers with true inspiration, everyone knowing that the guidance would yield nothing short of magical results. 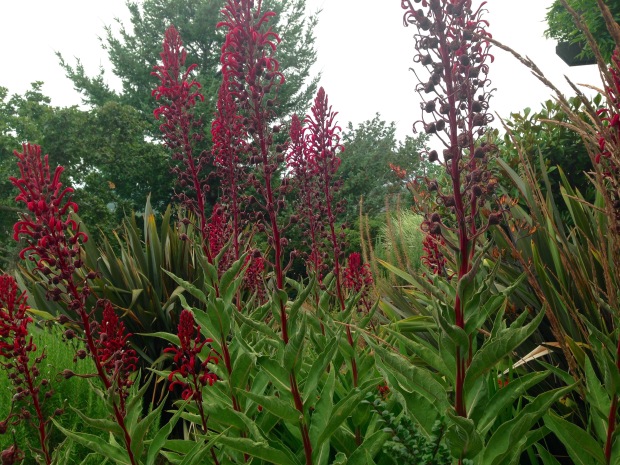 Lobelia tupa, or Chilean Cardinal flower, made a real statement at Government House

In the meantime, I will dream about putting the finishing touches on my own garden one day. It’s quite likely I never will; I always love to experiment and there’s always a new plant to try (whether it really fits or not). But dreaming is so delightful a pastime; often it’s the dreaming and anticipation that is the very best bit of all… 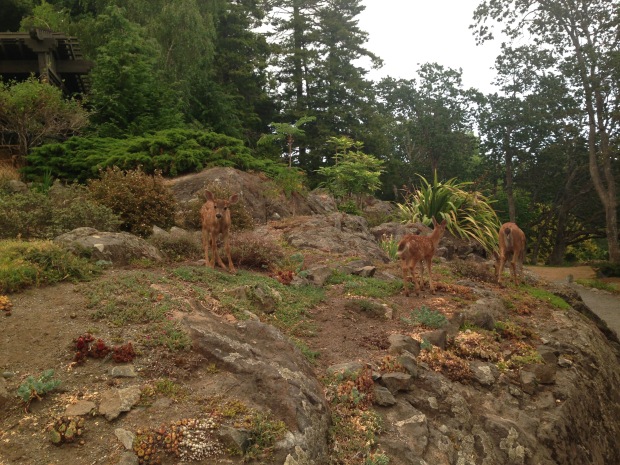 The only area of the garden that was struggling, had the guilty parties right there. Oh, the two babies were cute, though! I did forgive them their nibbling.