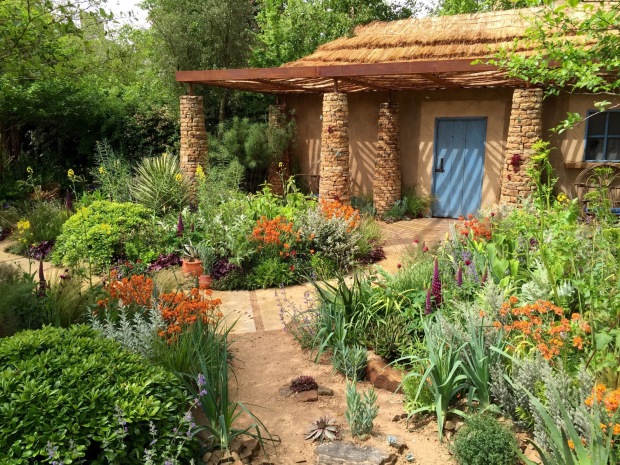 For the second year running, Matthew Keightley has won the Chelsea People’s Choice Show Garden award. Pretty good, eh? So why is it that the judges only (like, most of us would be fussy) awarded him a silver-gilt, for the second year running? Seven gold medals in 2015 and yet a silver-gilt won the show. And looking back over the last five years, not once did the judges’ Best in Show win the People’s Choice, with three occasions where silver-gilt picked it up.

Being the curious sort that I am, I can’t help wondering why? Are the judges just wrong? Or could it be that the public simply prefer design with a few rough edges? Or just maybe is it something about the timing of the awards that skews the results? Would the results be the same if people voted before the judges’ decisions were announced?

It makes me wonder which is the most meaningful award? Surely you can’t negate the views of thousands? Judges may have the utmost skill in their field, but are they more right than everyone else put together?

A view along the length of the garden, from the wet section, through the central section to the dry section. Photo: Alex Martin

It got me thinking about my own view of the garden. In the run up to the show, ‘Sentebale – Hope In Vulnerability’ (long for HIV), representing Prince Harry’s children’s charity in Lesotho, had been one of the gardens I was most excited to watch for. I adored Matthew Keightley’s 2014 Chelsea garden, I love gardens with a true sense of place and I love something a little creative and different. It had it all. And yet when I saw it, my heart sank. It was nice, but it didn’t quite make me dance around the room as I had expected.

My initial thought was that it too muddled. The brief was to evoke the landscape of Lesotho and represent the new children’s centre that opens there later this year. But I thought the garden was part very African, part very Chelsea. It didn’t have that sense of place I was looking for. Neither one nor the other: the worse of both worlds.

As I studied the garden in more detail, I saw that it is designed in three sections. The dry, arid section, with Agave and Festuca glauca. The wet section, representing the mountains of Lesotho with lush Agapanthus surrounding a generous waterscape. In the middle, well, something else. Prince Harry referred to part of the garden as ‘taking you on a journey of what [Lesotho] could be like’; Robin Lane Fox was told that the fennel and lupins were evocative of Lesotho’s productive gardens; The Frustrated Gardener’s blog describes a ‘colourful garden compound’ in the central section. But to me, it looks like the ‘odd bit out in the middle’, where they thought they’d better have a section of typical Chelsea. It just didn’t hang together.

It has been said that judges frown upon gardens that are overly themed. I’m generally not a big ‘themed garden’ fan myself, but equally I don’t think all themed gardens are bad gardens: they can have a tremendous sense of place. This was a show garden designed to represent and take creative inspiration from a charity in Africa; by definition show gardens are islands of creativity, they don’t need to blend in with their surroundings as most ‘real’ gardens benefit from.

Sweet chestnut fencing divides the different garden sections. The circular stone pillars will be shipped to Lesotho for the new children’s centre. Photo: The Frustrated Gardener

It seems that there was conflict: wanting to ‘do’ Africa, but not daring to go too far from the judge-loving norms; and ending up with neither one nor the other.

But the public clearly loved it. The crowds here were huge and they voted for this garden with their phones as well as their feet. They loved the bright, hot colours and the playfulness of the design. They loved the peaceful waterscape with the cool running water. They loved the children’s footprints in the sawn sandstone. Prince Harry said of Matthew, ‘he’s nailed it’.

So what happened with the scoring?  Most say that against the set criteria, the scoring is completely fair and just. Each garden is scored individually by each judge, it is then debated, then debated some more and it is broadly thought that the outcome is robust. Of course the appropriateness of the criteria may questioned, but that’s a whole different question. 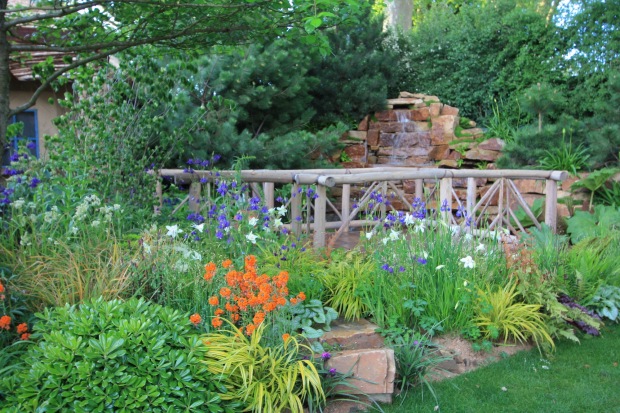 These colours are fun and the texture of the Pittosporum in the foreground really stands out. But perhaps the colour palette is a little too restrained and lacking in harmony? Photo: The Frustrated Gardener

I, personally, feel that silver-gilt was right and conclude that the timing element of the awards is what gave this garden the People’s Choice award. I think those who liked Dan Pearson’s garden best, of which there were many, didn’t feel so compelled to vote for the People’s Choice. After all, the garden had already proven itself with Best in Show. But for those that liked this garden, or liked Matthew Keightley, Prince Harry and/or the Sentebale charity’s aims, they wanted to make a stand and show it was worth more to them than eighth on the list.

Agapanthus in the wet section by the waterfall. Photo: The Frustrated Gardener

Which I think is pretty nice. It shows generosity and passion and feels like a good way of acknowledging well loved gardens that didn’t quite make the grade they might have. My hypothesis is that had the People’s Choice been voted on before the judges’ decisions were announced, Dan Pearson would have won that too.

And so Chelsea draws to a close for another year. It was called the ‘Chelsea Shower Flow’ (read that slowly) by some this year, in part due to the profusion of water features but even more so due to the wet weather. As Alan Titchmarsh commented (you can just hear him say it), ‘a garden without water is like a kiss without a squeeze’ and our lovely Matthew Keightley’s good natured response to the rain on the succulents in his arid garden was, ‘I thought the garden would probably work best in the sun…but actually rain always makes natural stone look its best and it made the plantings look even more vibrant’.  What a nice man he is! After all I’ve said, I feel very happy for his award for a truly beautiful garden.

The orange of Erysimum ‘Apricot Twist’ really pops and looks stunning against the warm coloured shed and glaucous foliage. Photo: The Frustrated Gardener

With thanks, again, to Dan at The Frustrated Gardener and my friend, Alex Martin, for the kind permission for the use of their photos.