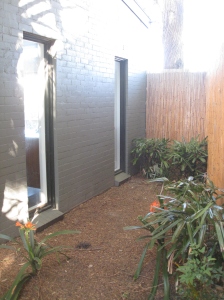 This garden in Edgecliff in the Eastern Suburbs of Sydney had been landscaped in 2010.  A lot of the plants had thrived and grown well, but others had died or were significantly stunted.  This was particularly a problem in an area close to the front door which bore the full front of the coastal wind and had a large gum tree close by that removed most of the water and nutrients from the soil.

After a review of the previous landscaper’s plan, learning what had worked and what hadn’t, a large palm was added at the end to soften the fencing, and more importantly, break the wind impact.

The photo above shows the finished garden, albeit with newly planted, small specimens.  These will fill out in a couple of years, creating a beautiful, lush, tropical look. A meandering pathway to a Japanese lantern, which is lit at night, completes the tropical Japanese design. 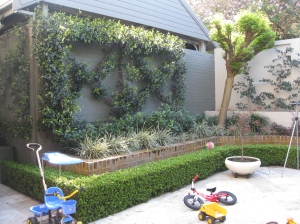 In another part of the garden an under-used terrace had become a storage area.  It had no other clear purpose and was really a bolt on to the pathway around the side of the house.  I discussed some possible functionality for this area and with a three year old and a new baby on the way, suggested that a lawned area would be both aesthetically pleasing and practical.

My client embraced this idea and installed the lawn himself, almost overnight, having researched and purchased a drainage system that allowed him to place turf on top of the paving, keeping the option open to revert to paving further down the track.  When I saw the finished result I was amazed how the lawn looked as though it had always been there – it was a very professional addition.  I was thrilled when I was told that it had increased play time outside considerably.

New lawn in place – located next to the play room it is perfect for young children and gives a much softer look to the garden, adding a whole new, usable space to an otherwise lawn-free garden